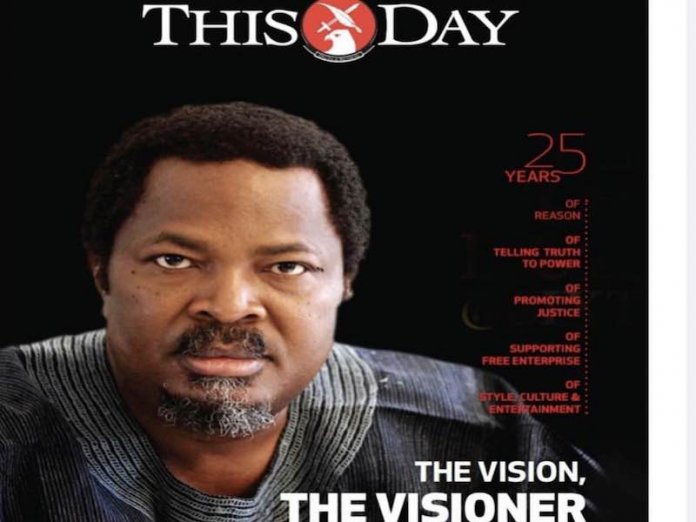 Vanessa Obioha reports that at the recent THISDAY Awards and Silver Jubilee, staff of the prestigious paper, both serving and former, were given a huge sense of pride and belonging

The feeling of pride started right from the hallway of Eko Hotel Convention Centre in Victoria Island, Lagos where the event was held. Former and current employees of THISDAY Newspaper, the leading authoritative national daily delightfully sought their names on the long list displayed on the walls of the hallway. The list contained names of individuals who have worked with the paper since it hit the newsstands 25 years ago.

On spotting their names, they delightfully posed for the camera to capture these epic moments. It’s not everyday the newsmen get to shine in the spotlight. They are most times in the field, pursuing news, breaking news and shaping opinions that hold leaders accountable while telling stories that uplift the nation.

For these gentlemen of the press, it is a moment of pride and it is clearly reflected in their disposition. It showed in the way they interacted with their colleagues. The feeling of camaraderie could not be mistaken. Shouts of excitement rented the air as old friends connect. A feeling of nostalgia was created as they recount past experiences over cocktails.

Inside, the feeling of pride went a notch higher at the elegance of the setting. It was a continuum of glitz and glamour, with the stage covering the breadth of the hall. The backdrop of gold and silver lights added to the grandeur with the name of the paper boldly displayed on the gigantic screen. Not a few were stunned by the beautiful spectacle.

But the Chairman and founder of the Newspaper, Nduka Obaigbena is not known for doing things in small measures. Last year, when he marked his 60th birthday, he dropped jaws with the panache which he marked the event, even bringing international sensation Toni Braxton to serenade his guests. For the 25th anniversary however, he flew in Grammy award-winning artiste John Legend to entertain his well-heeled guests. The singer and songwriter serenaded guests with some of his hits such as ‘All of Me’, ‘Green Light’, ‘Save Room’ and ‘Tonight’. The publisher also brought the well celebrated Nigerian-French artiste Asa who performed some of her popular hits ‘Jailer’, ‘Bibanke’, ‘Fire on the Mountain’, and ‘The Beginning’ from her latest album ‘Lucid’. She closed her set with the emotional piece ‘Bamidele’ from her 2010 album ‘Beautiful Imperfection’.

The first 25 years of the newspaper is one filled with challenges but somehow, Obaigbena has risen above all odds stacked against him, continuing to be a visionary in the fourth realm of estate. It started off as THISWEEK and later metamorphosed to THISDAY Newspaper. At the time it launched, the country was still under military rule. Yet, it didn’t halt the visionary and his foot soldiers from reporting news that challenged the norms as well as elevated the status of journalism. THISDAY was the first Newspaper to start publishing in colour print and was also the first to introduce the glossy fashion and lifestyle magazine pullout, Style in the paper.

In another unique fashion, the silver jubilee marked the birth of ARISE Play, the first African global streaming platform. Scheduled to launch on March 27, 2020. The streaming platform is poised to change the way Nigerians as well as the world consume news with its unique content. Flying under the tagline ‘Beyond Streaming’, the Chief Executive Officer of the streaming service Collins Khumalo said that the streaming service will break down news of the day in different formats from text to videos to gaming.

“THISDAY has spent the last 25 years shaping opinions. We want to use the next 25 years using technology to create and tell our African stories.”

He said further, “Every week, you can experience on ARISE Play stories that will make you laugh and cry. This is a global initiative to fundamentally change the way we consume content, because content is everywhere.”

The service which launched last year in London has on its team, Biola Alabi who will serve as the Content Adviser and Rosie Madueke Dozie as Strategy Adviser.

The key objective of the platform is to change the way news is consumed while telling true African stories that will celebrate the past, present and future of Africa.

Obaigbena during his speech didn’t fail to recognise the over 1250 visionaries who have worked with him as well as provide a platform to recognise brands and individuals that have distinguished themselves in the last decade. One of such was Jim Ovia, the Chairman of Zenith Bank. During his speech, Ovia praised the doggedness of Obaigbena, recounting how they expressed skepticism when he invited him and a few friends to the launch of ARISE News.

“The likelihood that you were going to succeed was in doubt. But today, ARISE television is only in competition with the likes of Cable News Network (CNN). He is a visionary in his own right and even for Africa.”

He implored the guests to celebrate the staff who had worked with him tirelessly to bring his vision to light while still raining accolades to the man of honour.

“From a village chief, he has ascended to Duke of Africa, a global Duke. We appreciate you for touching lives and not only in Africa but all over the world.”

Other notable guests recognised at the event include former Commonwealth Secretary-General, Chief Emeka Anyaoku whom the publisher revealed was the first personality he interviewed; the publisher of the Guardian Newspaper, Lady Maiden Ibru, the National Chairman of the All Progressive Congress (APC), Adams Oshiomole, Managing Director of Access Bank, Herbert Wigwe, international model Naomi Campbell, among a host of others.

Awards were also given to notable Nigerians who have contributed immensely to the development of the nation in their various fields. Divided into two broad group sPeople’s Choice and Editor’s Choice, the recipients include the governor of the Central Bank of Nigeria (CBN) Godwin Emefiele (Peoples Choice) and Wigwe (Editor’s Choice) who won Banker of the Decade; former Lagos state governor Babatunde Fashola who was the People’s choice for Governor of the Decade while Peter Obi emerged the Editor’s Choice for same award

Fashola in his acceptance speech, dedicated the plaque of excellence to the people of Lagos state as well as the party which got him into the office. He urged Lagosians to continue to help make Lagos better, signing off with his popular slogan ‘Eko ni baje’.

Obi while dedicating the award to the people of Anambra state who stood by him, he reminded the audience that the “work for building a better society for our children is still far away and we need to work hard.” He also urged them to remember politicians in their prayers and that they should use public funds for public good.

Globacom Limited emerged the People’s Choice for Brand of the Decade while GTBank was the Editor’s Choice.

For most of the awardees, the event was a perfect avenue to make remarkable statements about Obaigbena as well as the current state of the country. For instance, the Minister of Transportation who received the Editor’s Choice Award for Minister of the Decade regaled the audience of his long standing friendship with the chairman of the paper.

“Nduka and I became friends in 1992. He was barely 26 years old. We have disagreed more than we have agreed, so I’m surprised that he will recognise me.”

He also thanked President Muhammadu Buhari for the attention he had attached to infrastructure.

The Acting Chairman of The Economic and Financial Crimes Commission (EFCC) Ibrahim Magu however made the most impression. The institution was the Editor’s Choice for Institution of the Decade. Magu reacted to the claim of Former governor of Cross River state, Donald Duke who presented the award to him, that he is not a customer of the institution by stating blatantly that the records showed otherwise. He further said that he was surprised at the recognition and was not used to staying at occasions of such pedigree for long.

“But somehow, I stayed. I was curious to find out how the awards will go.”

He used the moment to tell the captains of industry, government agencies and eminent leaders that the EFCC don’t want to have more customers. He tasked the private sector to play a way in boosting the company and also assisting them to fight corruption.

“There is no one way to do this alone. You have to help us.”

“We are starting again and I’m encouraged to fight more corruption. We are going to increase the number of cells and zonal offices across the country.”

He pleaded with bankers to help them sanitise the system because they will always be at the receiving end as well as rehabilitate online scammers known as yahoo boys.

Perhaps, one of the remarkable moments of the awards was when Oshiomole while presenting the Editor’s Choice Award for Person of the Decade rained accolades on former President of Nigeria, Goodluck Jonathan.

He described Jonathan as an exceptional leader, friend and a brother for the singular act of peacefully conceding defeat at the 2015 elections.

“Whether you belong to his party or not, he showed that it was possible for an African leader to concede defeat even before the results were announced by the electoral umpire. And as Nigerians we are very proud of him. I used to be critical of Jonathan. Because that is what I want to do. But tonight I’m appreciating him.”

Obi also added that the award is the most prominent of the night, describing Jonathan a true democrat.

“He allowed a free and fair election. During his administration, we had freedom of speech and justice applied. I thanked Oshiomole for acknowledging the role Jonathan played in the democracy of Nigeria,” he concluded.