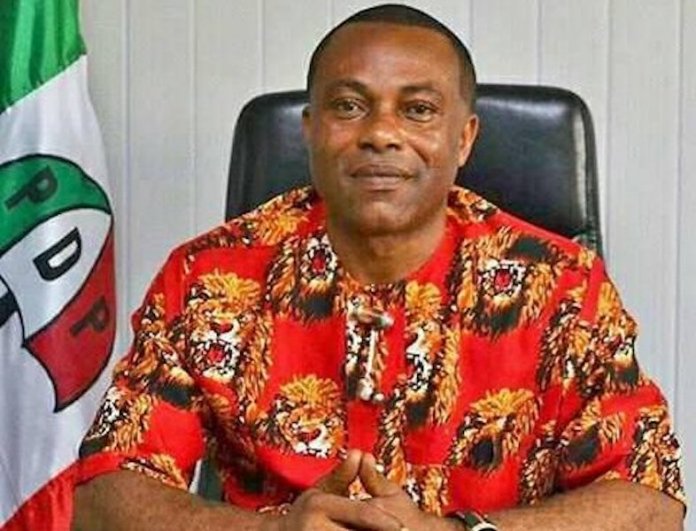 Imo State Chairman of the Peoples Democratic Party (PDP), Chief Charles Ezekwem, has dumped the party following the controversial Supreme Court judgment which declared Senator Hope Uzodinma of the All Progressives Congress (APC) as the governor of the state.

Recall that earlier, the former National Deputy Auditor of the party, Chief Regis Uwakwe, also from Okigwe had on 14 January, 2020 dumped the party for APC immediately Uzodinma was declared governor by the Supreme Court. Ezekwem cited what he described as prevailing circumstances within the party as his major reason for quitting the party.

In his resignation letter dated January 25, 2020 and personally signed by him and addressed to PDP National Chairman, Uche Secondus, read in part stated: ‘In view of the prevailing circumstances within my party vis-a-vis my present standing as the state chairman of PDP in Imo State and after due consultation with my family, and with the approval of my supporters, I hereby tender my resignation as Chairman of Imo PDP, also as a member of the party in the ward of Okigwe Local Government Area which has been duly communicated to ward chairman.”

Although, there’s no official reaction from the ruling APC or Imo State Government as the erstwhile state PDP Chairman has not officially announced his next line of action.

However, a reliable source in APC has revealed that following the removal of Ihedioha as the governor of the state by the Supreme Court, several PDP chieftains in Imo State have indicated their willingness to cross over to APC, including Ezekwem who he said had earlier reached out to Chief Nnamdi Anyaehie, Chief of Staff to Uzodinma on his desire to join APC with his supporters.

A source, who spoke on condition of anonymity, said: “After the Supreme Court judgment which declared Senator Uzodinma as the governor of the state, we witnessed an exodus of PDP members especially from the ward levels to the ruling party. But most of the big party members have joined APC in spirit.”

But in the case of Ezekwem, the source disclosed that Anyaehie has asked him to settle his rift with his people who have vowed not to allow him into APC.

“Chief Anyaehie has told Ezekwem to settle his quarrel with his people at Okigwe, many of whom he had frustrated out of the PDP while he was the chairman and that they would not allow him to come to join them again in APC. Nevertheless, his body and soul is already in APC. We are just waiting for his official declaration for the APC,” the source said.

Ezekwem, who doubles as the chairman of Heartland Football Club in Owerri, was said to have been remotely working with Senator Samuel Anyanwu, who has also dumped PDP for APC.