Chairman of Nepal Oil and Gas Limited, Elder Ekeoma Eme Ekeoma, one of Nigeria’s humble yet wealthy Christian entrepreneurs has defied conventional wisdom about Christian tycoons. Motivated by Jesus’ radical teaching on money, Ekeoma gives generously. Blessed beyond measure, he has in the last three years, committed himself to evangelism, donating millions of naira in philanthropy every year to education, prison visits, with the aim of providing succour, employment, and regeneration in areas of high deprivation. Adedayo Adejobi, who attended his newfound passion- Believers Fellowship’s third anniversary, writes

Like any church celebrating an anniversary, last weekend no doubt marked a watershed in the annals of the life of the Chairman of Nepal Oil and Gas, Elder Ekeoma Eme Ekeoma and his wife of inestimable value, Barrister Ngozi Ekeoma, as they hosted friends, well-wishers, and congregants at the Golden Gate Restaurant, Ikoyi, to an evening of thanksgiving, dance, music, and soiree on the occasion of the third year anniversary of their bi-monthly gathering, the Believers Fellowship.

Speaking on the unique essence of the celebration and milestones achieved, Elder Ekeoma said, ‘‘The Believers Fellowship is the brainchild of the entrepreneur as instructed by God, to prepare humanity for the second coming of Jesus Christ. Believers Fellowship was birthed in 2016 and it is a non-denominational fellowship that meets every fortnight. But today marks the end of our fellowship year and third anniversary.

“For these reasons and more, we’ve deemed it appropriate to come together to worship God in praises and in thanksgiving. And that’s what we have done today. My prayer is that in January when the first fellowship for the year would begin, I’m believing God that he’ll give us a massive increase of believers coming together in praises and thanksgiving to God.”

According to him, the end time is “here” and God specifically made a demand that he should start the fellowship for believers within the Island region, to worship God and remind themselves that the end is very near.

“This is the most important message in the Christian calendar,” added the Nepal Oil chairman. “If at the end of time, you gain the world and lose your soul to sin, it would have been better not to have been born. The fellowship strives to sensitize Christians, lost souls and encourage believers on the journey to life in eternity.”

Unlike his peers who would have taken to the idea of making the fellowship a business concern by establishing a full-time church with branches locally and abroad, Elder Ekeoma has done the opposite.
Ekeoma is not given to such mundane and unbiblical pursuits. He is rather consumed with preparing the saints for eternity.

“We call it a fellowship. I don’t have the mandate to begin a church,” he admitted. “The mandate is to remind believers and members of the body of Christ that the end time is very near and that is exactly what I have done, and that’s why we have different denominations coming to fellowship with God and one another.”

Taking his exhortation from Psalm 90:12, he urged all to come closer to Christ and be saved. Like the Israelite prophet, Elijah, Elder Ekeoma also made a couple of positive declarations and prophecies.
Speaking about the gathering, a pastor at the fellowship, Elder Joshua Okorie, said: “We wanted to make it more than a time of pure nostalgia and thanksgiving to God for the year spent and the New Year ahead. We wanted to make our Fellowship third year anniversary a starting point for the future, both on an individual basis and as a fellowship.”

Another member of the fellowship, Pastor Akinpelu Akinlabi, noted, “Like farmers who appreciate what their crops have yielded, despite hail and disease, Believers Fellowship has overcome many obstacles. It’s a season to celebrate our third anniversary and a season to celebrate a faithful God.”

Having been “blessed beyond measure”, Ekeoma, a committed evangelical Christian believes that with the blessing comes a responsibility. Donating millions of naira each year, Ekeoma has funded the building of schools.

He is one of Nigeria’s richest Christian entrepreneurs and has defied the conventional wisdom about Christian tycoons: He doesn’t hail from the Persian Gulf, he didn’t make his money in petroleum alone, and he definitely doesn’t wear his faith on his sleeve. Motivated by Jesus’ radical teaching on money, Ekeoma gives generously.

“He’s an icon. He shows that excellence has no caste and no creed and that if one has excellence, one can make it to the top,” says Jaiye Ayeni.

A role model like Ekeoma might seem to be what Nigerian Christians need.
Though the country’s economy is growing at 9% annually, the vast majority of Nigeria’s estimated 200 million remain socially marginalized, badly educated and mired in deep poverty. They are left out of the social transformation that is propelling millions of their compatriots into prosperity.

Ekeoma’s enormous wealth is indeed inspiring. He’s unapologetic about his religious roots and embraces Christian faith and causes in a nation where some rich Christians don’t want to be publicly identified by their religion.

Elder Ekeoma bristles impatiently when the plight of the broader Nigerian populace is cited.

Unlike many who set up non-governmental organizations to dispense their philanthropic initiatives, Ekeoma’s philanthropy is dispensed through his ministry, the Believers Fellowship, a bi-monthly praise-worship, prayer, and word event gathering.

“I get pleasure from it,” he acknowledged.
“I love it,” Ekeoma added. “I don’t feel like it is an obligation.”
There’s a long tradition of the super-rich giving away the store to make life better for the less fortunate.

Ekeoma is one of the few such ones and the causes to which he gives are medical and prison charity, health initiatives educational programmes. 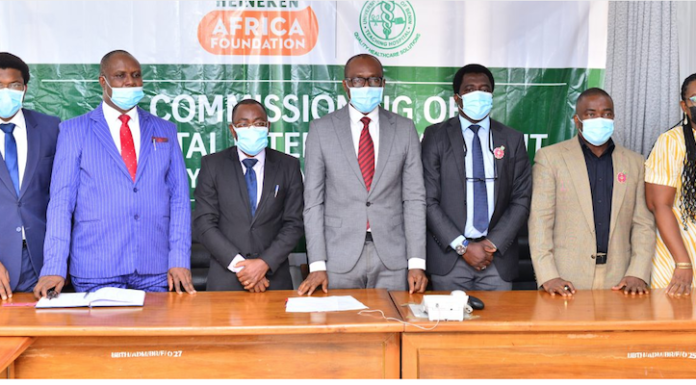