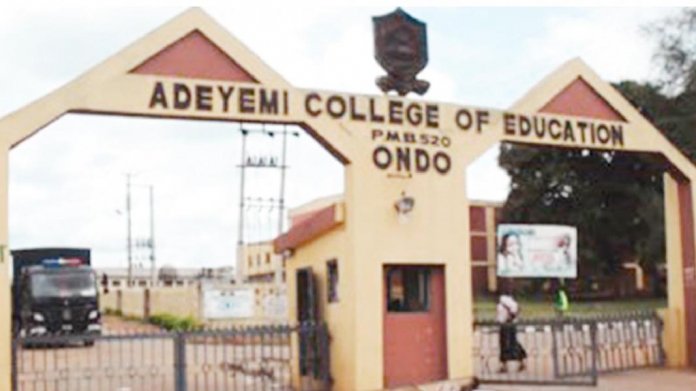 A 400-level student of the Adeyemi College of Education (ACE), Ondo State, Victor Olaoye, has won the 13th edition of the National Arts Competition, among artists between the ages of five and 35.

Olaoye of the Department of Fine and Applied Arts of ACE came top in the 2019 edition of the competition held at the International Conference Centre, Institute of Management and Technology (IMT), Enugu,

He defeated more than 500 artists in the competition, which was launched in 2007 tagged ‘Life in My City Art Festival’ (LIMCAF) and which was the vision of a reknowned artist, Chief Robert Oji. The 2019 edition of the competition has as its theme ‘The Other Side’.

In addition to winning the star prize of N500,000 and plaque, Olaoye would join five other artists to participate in an international art competition, which will hold at Dakar Art Biennale this year.

Receiving the winner of the competition, the Provost of the college, Dr. Samuel Akintunde, expressed happiness at the exploit made by the student, who he said made the college proud.

An elated provost, who commended the winner and other students of the college’s Department of Fine and Apllied Arts and their lecturers, said the feat has raised the ranking of the institution.

“One thing you have proved today is that we are not second class to any institution. You have also proved that the best can come from a college of education. I thank the elders in the department. You are doing your best to elevate the department to a higher height and to see that it continues to be vibrant.

“I am proud of you and I have belief in that department because of the calibre of people there. What we are going to do is to see that the college deserves the award. We shall make noise about the achievement and we shall also celebrate you,” he stated.

While urging staff of the department not to relent in their efforts at promoting excellence, the provost emphasized the need for them to open the doors of opportunities to other students of the college desiring to acquire skills “that would transform them to employers of labour after their graduation.”

Responding, the Dean School of Vocational and Technical Education, Dr. Adewale Ajayi, thanked the college management for providing the necessary support and encouragement for the students before, during and after the competition.

The LIMCAF Competition is a yearly celebration of creativity, featuring young talents in the Nigerian art landscape between ages five and 35 years.