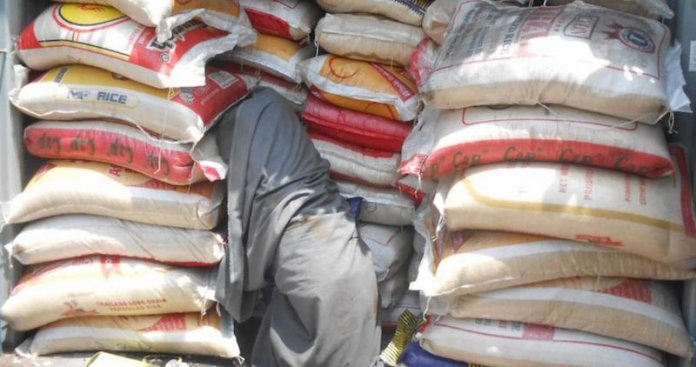 In the fight against illegalities on the waterways, the Nigerian Navy, Forward Operating Base, Ibaka, Mbo Local Government Area in Akwa Ibom State, has arrested six suspects and seized 1, 439 bags of smuggled rice.

The arrests were made along the Unyenge, Effiat and Mendoro creeks in five different operations by naval officers and men on routine patrol in their gunboats.

Speaking yesterday in Ibaka, Commanding Officer, FOB, Captain Peter Yilme, said on January 13, 2020, two suspects were arrested with 803 bags of 50kg rice, while on January 2, 185 bags of rice were seized but the suspects escaped on siting the Navy gunboats.

While handing over the suspects and items to the Nigeria Customs Service (NCS), Yilme said the command would remain steadfast in fighting illegalities on the waterways in line with the directive of the Chief of Naval Staff.

“I handover 1, 439 bags of rice and six suspects to the Superintendent of Customs, Garuba Hassan, in line with the directives of the Chief of Naval Staff. We are committed to riding the waterways of all forms of illegalities.

“I commend the untiring efforts of the officers and ratings in ensuring that the mandate and tasks of the Base are achieved. I also appreciate the immense effort of the Chief of Naval Staff, Vice Admiral I. E. Ibas, for providing the necessary platform and logistic support for the Base to carry out its operations,” he said.

Deputy Superintendent of NCS, Garuba Hassan, received the six suspects and 1, 439 bags of rice from the Nigerian navy.

One of the suspects, Wede John, a boat worker from Bayelsa State, said he normally transports fish and was carrying rice for the first time when he was arrested.

He said, “I don’t know the owner of the rice and didn’t know that rice was loaded onto the boat. This is my first time of carrying rice. I usually transport crayfish and dry fish to Oron. I was carrying rice from Bakassi to Unyenge when I was arrested.”

Awagoyi Philip, who is a boat driver, said the owner of the rice promised to pay him N20,000 for carrying the rice but that he was yet to collect the money.