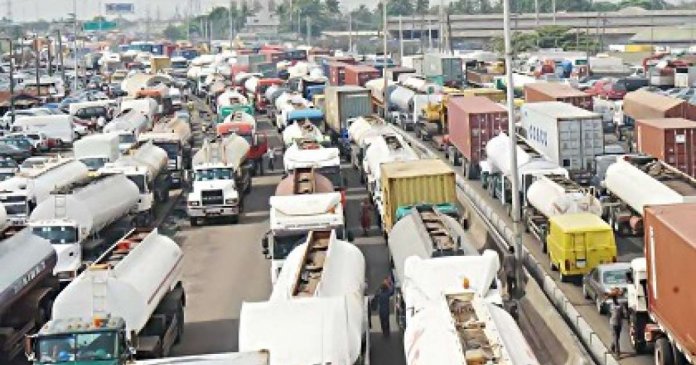 Eromosele Abiodun
In a bid to avoid a total shutdown of traffic in Apapa due to the high volume of cargo into Nigeria, the Nigerian Shippers Council (NSC) has called on terminal operators to improve on efficiency by effectively deploying their equipment to salvage to the situation.

Executive Secretary/Chief Executive Officer of the NSC, Hassan Bello stated this when he led officials of the NSC and Presidential Task Team on a visit to APM terminals in Lagos over the weekend.

Speaking to newsmen after the meeting, he said, “We are apprehensive of the congestion on the road and at the sea and vessels taking much longer time to come in. Your efficiency has much to do with this, we also always concerned about your operation, we understand the challenges you face.

“We also want to sit down with you and see how we can come to a conclusion. I am concerned with the cost to shippers, there have been some delays and the delays come with cost attachment especially with the ship coming late and demurrage and late evacuation of cargo where the shippers with the consignees through no course of theirs have been slammed with some demurrage and I think we have been on this issue for a very long time.

“We discussed with the Vice President about a month ago and we feel that shippers should not suffer or bear the cost of delays occasioned by terminals or other factors.”

He added, “We have said that this period of before the clock turns should be extended from three days to 10 days because in other countries it is seven days free period. This has been under consideration and we have discussed this with the Nigerian Ports Authority (NPSA) and all the terminals.

“Now this is the biggest terminal for containers, you are doing quite a lot but we are disturbed first of all with the cost. People should not be slammed with cost for what they are not guilty of.
“Your efficiency or otherwise has a lot to do with what is happening, how you deploy your equipment has a lot to do with the traffic situation.”

“We have always engaged APMT and the response has always been that that they are ready to take more trucks. Who is supposed to give them trucks?

“It is the NPA that is in charge of the call up and they will tell you that the ones that are inside are yet to be dealt with. So in other to make sure that the road is free we have stopped trucks from coming from Creek Road to access the port, retaining only one access to the port. But right now we have truck right from Area B on cue, if container carrying trucks cannot get in, the empty containers cannot take their place.

“So the trucks that have been called by the NPA are still on the cue. But we get report from APMT that they deal with 500 to 700 rucks but our investigation revealed that they are taking trucks from barges and because they do so, there is no way trucks from the roads can enter because the barges have taken over the whole space.

“We are concerned that the figure does not tally with the efficiency we see on the road. We need to look at the issue of demurrage because it is what is making trucks to want to rush to drop containers.”

On his part, Stakeholder Manager APM Terminals, Odibe Daniel, commended the NSC and Presidential Task Team for their concern and taking steps to salvage the situation.

“I must commend the shippers’ council and the Presidential Task Team for coming around to find out what the challenges are. Like I have explained to them, we all need to collaborate. “You need prior information before trucks can access the terminal. Better use of the call up system and the Lilly Pond Truck Transit Park will help us create the efficiency that is desired in the port.

“We are experiencing high volumes into the country and we have to work together to ensure that it is sustained and also make it easy for port users to access their cargo, “he said.