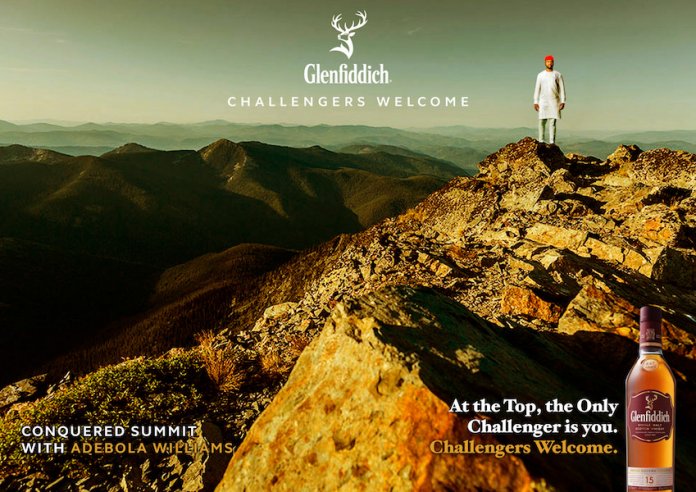 Glenfiddich, one of the leading whisky brands and the world’s most awarded single malt whisky, earlier in the year, tapped media entrepreneur Adebola Williams, and Tech entrepreneur Edmund Olotu for the “Challengers Welcome” campaign.

Both entrepreneurs are extremely accomplished and are considered true mavericks of their generation.

Williams and Olotu showcase maverick figures who have successfully challenged the norm to drive change and have forged new paths for themselves and for others to follow.

Williams is a pioneer at the intersection of media, democracy and social change, and also co-founded Enough is Enough (EiE), one of Nigeria’s foremost civic participation groups and a voice for young people on politics.

He is one of the most recognisable young leaders on the continent carrying the message of enterprise and leadership to inspire hope and faith from Africa to the world. He has been named by the United Nations as one of the 100 Most Influential People of African descent and profiled by Forbes as the man who helped three presidents win elections consecutively in Africa.

Olotu has founded and financed several technology companies in Nigeria and the USA. In January 2019, his company, Tech Advance, was included in the London Stock Exchange “100 Companies that Inspire Africa Report”.

William’s challenge included a seven-day trip across Africa, travelling from the West, to the North, East and South, while experiencing the culture and embarking on various challenging activities in each of the countries he went to.

The challengers welcome campaign encourages consumers to be true mavericks, forge their own paths by creating their own rulebook to ‘challenge’ the norm.

Glenfiddich never follows where the path leads, but instead where there is no path and they leave a tail for others to follow.

William Grant, the man behind Glenfiddich, created a legacy we all have the privilege of enjoying today.

In the 1880s, Grant quit his job to fulfill his dream of making the best dram in the valley. Like a true maverick, he broke norms; for over 129yrs, Glenfiddich has lived on its own terms, setting its own standards, so much so, it set a new standard in Scotch and created the FIRST SINGLE MALT CATEGORY. The true definition of a challenger.

Five generations later, Glenfiddich still celebrates his passion and strive to bring together all those who have or dream to challenge and change the world.