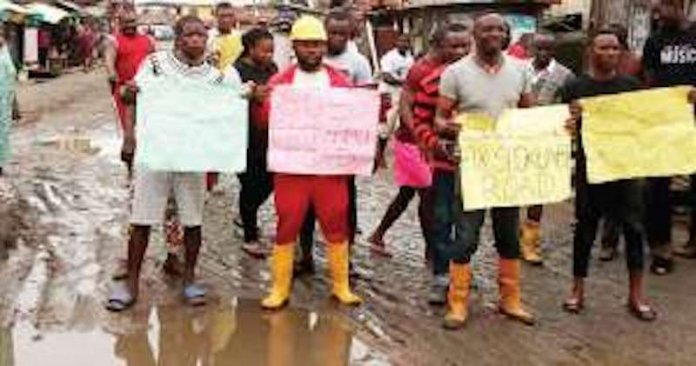 The residents of Kirikiri in Lagos State have complained about the poor state of their environment and alleged that the state government and the local council were not helping the situation.

The people complained that the bad state of roads, bad drainage system, stationery trailers and open defecation had contributed to degrading the environment.

They also disclosed that the blocking of roads by trailers had affected their businesses and caused a lot of accidents.

One of the residents, a civil servant, who spoke to THISDAY off record yesterday, said: “The roads in the area are very bad and those responsible are not doing anything about it. The people who are supposed to provide leadership and protect the environment, the Police and the Navy are instead contributing to the bad state of the road, and it is not supposed to be so.”

THISDAY learnt from another resident in the area, a business man, that: “The roads are in bad state because of the trucks that are packed indiscriminately on the road. Trucks are not supposed to pack in residential areas, and this situation has resulted in several accidents and eventually death.

“As you can see, under the trucks are very dirty, and if anybody wants to pass feces, he or she does it under the truck. Nobody will throw dirt on the road normally when the road is free and clean. So, we are not living in a healthy environment.”

The residents urged the Lagos State Government to send health officers to their area in order to observe and seek solution to the state of the environment in the community “by fixing the roads, drainage system and the unhealthy environment which the people are suffering from.”