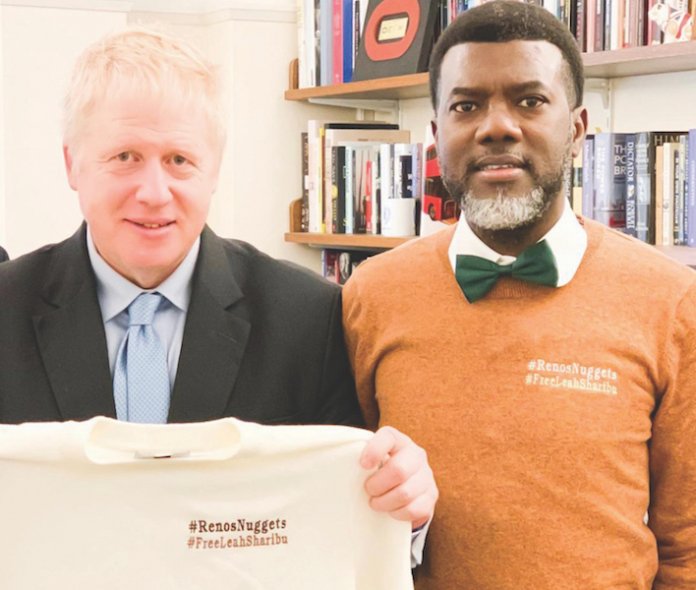 Some people ask why I have left General Buhari to focus on #RenosNuggets. Well, for 4 years I have been counselling Buhari and he has not improved. If I cannot improve the leader, then I am challenged to improve the followers for the future, hence my nuggets. It is just like a farm. If a farmer has spent 4 years nurturing a tree that refuses to grow and yield fruit, then the economical thing to do is to abandon it and plant new trees. General Buhari is like cement that has hardened. It can no longer be moulded and I do not believe in wasting my efforts.

Having said that, let me say that I appreciate what Punch Newspapers just did. But they should give credit to whom it is due. On May 31, 2019, I was the first person to call on all democrats to refer to Muhammadu Buhari as General Buhari, rather than President Buhari in a full page advertisement in national dailies which cost me over a million Naira.

But moving on from that, let me register my pleasure with the landslide victory Boris Johnson and the Conservatives recorded after the December 12, 2019 snap UK election. What a way to end 2019! This election victory is a foretaste of the Donald Trump victory I hope to celebrate in November, 2020, God sparing my life and his. Given the choice of winning the lottery and Trump winning in 2020, I will elect to have a Trump victory.

Why am I so excited about Boris Johnson’s victory? Well, because the most fulfilling thing I did in 2019 is going to Mount Everest, because of the #FreeLeahSharibu movement. I remember that day. It was a spiritual experience and filled me with hope that Leah will return to home. But what made me so full of hope was the meeting I had with Boris Johnson before going on that trip on Wednesday April 3, 2019. He promised to assist the Free Leah Sharibu effort.

His resounding victory this past Wednesday thus gives me hope that Leah’s case will be once again on the front burner, even when the government in her own home country will soon have her forgotten.

Leah Sharibu is a survivor. She is alive and she inspires me. Leah is like water. She survives ! When it is too hot, water survive as steam. When it cools down, it returns as water. When it is too cold, water survives as ice. When the warmth returns, it return as water. Leah outlasts her circumstances by being tougher than those circumstances. She is as fluid as water. Scripture is often described as the Water of the Word. The reason being that God’s Word will always survive irrespective of what men do to it. And when you consume the word of God, you will also survive and outlast your circumstances!

If General Muhammadu Buhari thinks that I will give up on Leah Sharibu, then he does not know me. If I will name one single character trait that is responsible for the small success I have, I would say it is loyalty. My grandfather was an Olu of Warri, but that royalty has not gotten me as much mileage as loyalty. Loyalty ALWAYS stands you out! True story. In 2012, a once powerful man was angry with me because he felt I had taken his opponents’ side in a feud. Meanwhile, his opponent (a former Presidential spokesman) stopped talking to me because he felt I had taken the man’s side. When they settled, they found out that though I worked with both of them, I did not discuss any of them with the other party. I learnt that from Christ. God did not give Christ a name above all names because He is intelligent. He gave Him that name because He is loyal, Philippians 2:8-9

I will remain loyal to the cause to Free Leah Sharibu, no matter the blackmail from the Buhari Presidency. I have spent a fortune on this struggle and I have not collected a dime from any institution or foundation or even any government. And I am willing to spend much more. Leah Sharibu is a prisoner of conscience, held by Boko Haram simply because she refused and still refuses to give up her faith in God through Christ and accept Islam. As long as she is loyal to God, through Christ, I will be loyal to her and 1000 General Buhari s cannot stop me from this quest!

The power to free Leah Sharibu is with General Buhari. He has the power to release Boko Haram prisoners in exchange for Leah. Why does he not want to do it? After all, he has ignored court orders to release several political detainees, yet he has released over a thousand so-called ‘repentant’ Boko Haram members. Why is Leah’s case such that he will not do a prisoner swap with Boko Haram to get her freed?

Yet, he keeps flaunting pictures of himself and his daughters. Does he not know that Nathan Irmiya Sharibu is a policeman who was on official duty, guarding a VIP in Yola, as a member of the Special Protection Unit of the Nigerian Police Force, while Boko Haram was abducting his daughter and 109 other girls? Nathan also wants to take pictures with his daughter Leah. General Buhari must bring her back.

I will not go away. Leah Sharibu’s matter will be like a fish bone stuck in General Buhari’s throat, and the only way he can get relief from the bone is by giving relief to Leah’s parents. Until then, there is no retreat and no surrender from me Reno Omokri!

And to Pastor Yemi Osinbajo, it is so sad that you are in the corridors of power while this is happening and you chose to keep quiet. Have you forgotten the words of Christ or should I remind you?

You cannot just see your entire duty as being General Buhari’s sidekick. Damn the consequences and speak up for God’s people. Remember what Mordechai said to Esther:

“If you remain silent at this time, relief and deliverance for the Jews will arise from another place, but you and your father’s family will perish. And who knows but that you have come to your royal position for such a time as this?”-Esther 4:14.

Speak up Osinbajo. Speak up! Speak up even if your voice may quaver. Speak up for Leah. Or one day, you yourself may need others to speak up for you when the cabal has you at your throat. But it may be too late then. So speak up now.

I thank Boris Johnson for being the first person to model my Free Leah Sharibu T-Shirt, and I remind him again of the promise he made to me that he would put Leah Sharibu’s issue and the issue of the constant oppression of Christians in Nigeria, especially in Northern Nigeria, on the front burner. And I call on other world leaders to join in putting pressure on General Buhari and his cabal to do the needful.

And to those who send me threats and try to blackmail me because of the Free Leah Sharibu movement, here is my response to you:

CHILLAX! Even if I am going to climb down from the top of the mountain, where God has placed me, it would be to give others a helping hand by pulling them up. Certainly not to climb down to bark back at a dog that is barking at me because it cannot climb! I am like David. No matter how many darts Saul shoots at me, I won’t stop ascending to shoot back. I am fearfully and wonderfully made and that my soul knows right well. So hatred just flows off my back, the way water flows off a duck’s back! When the truth HITS home, the snake SPITS venom.

What I Learnt From Anthony Joshua and Andy Murray

In 2012, when Anthony Joshua was arrested for drug dealing, the British media called him a ‘Nigerian’. After his first win in 2017, and then again, after his most recent win last week, they referred to him as ‘British’. The first time I knew that Andy Murray was ‘Scottish’ was when he lost. All the times that he won at Wimbledon, he was ‘British’. Learn from Joshua and Murray. Not everybody that associates with you really loves you. Some people love your SUCCESS, not YOU. A wise man knows the difference. Your ADMIRERS are not your FRIENDS. When what they ADMIRE in you goes, they will also go. A FRIEND does not ADMIRE you. A FRIEND LOVES you. ADMIRATION has EXPIRY DATE. LOVE does not! Marry your FRIEND, not your ADMIRER and your marriage will last

Cain killed his brother, Abel, over jealousy. Joseph was sold into slavery by his brothers over jealousy. Esau wanted to kill Jacob over jealousy. It is not only enemies that are jealous of you. Blood is thicker than water, but jealousy is thicker than blood. Even Christ warned that ‘a man’s enemies shall be they of his own household.’-Matthew 10:36. So, don’t compete with your brother. Instead, complete him. Don’t give him a reason to be jealous of you. Always show your brother love. When you rise, help him rise so that the situation between the two of you is not so unequal that jealousy becomes an almost inevitable event