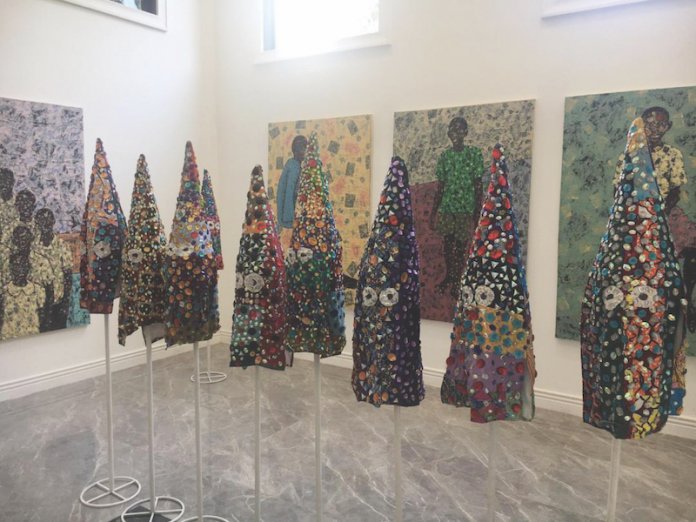 With a new body of works, Germany-based Nigerian-born artist, Emeka Udemba explores the issue of racial identity and how it expresses itself in unpleasant forms such as prejudice. But, the roots of this lingering problem extends deeper than the obvious, writes Okechukwu Uwaezuoke

“My works reflect on the construction of subjectivity of the ‘other’ and how this is influenced by information around us,” Emeka Udemba explains. “They embody my ongoing exploration with painting, photography, performance, video, and installation to address issues of my own identity and a sense of place in the world. While moving between realities, my works explore the theme ‘identity’ in an expansive form to interrogate issues of geographical, cultural and social belonging.”

Much like a shadow, Udemba’s identity as a migrant still stalks him. Not even the artist’s over two-decades sojourn in Germany – after he had left his native Nigeria – seems long enough to efface this fact. Oftentimes, his foreignness would creep upon him at a time he least expects it, albeit through nuanced allusions to his racial identity.

Of course, not that other persons of colour like him fared any differently. Nor are the allusions always that subtle. Indeed, the assumption that people of their kind cannot be German has lingered for too long. Take the case of the German-born Theodor Wonja Michael, the mixed-race actor, and author who died on October 19 at the age of 94, for instance. He had suffered racist taunts throughout his long and eventful life. Countless were the times he recalled being asked where he came from. He would then always reply that he was a Berliner, much to the surprise and irritation of his interlocutors.

Back to Udemba’s works. Something about his paintings is somewhat unsettling to the sensibilities of a discerning viewer. Through the apparent haze of random collages of newspaper and magazine cuttings, forms of male children of black African descent assert themselves. Yet, this contrived visual bedlam seems to suggest this sense of dislocation and, at the same time, adaptation; then offers a glimmer of possibilities even with an apparent manipulation of information. This recently patented collage technique of his is a metaphorical allusion to what he calls “the vibrancy of hybrid cultures and relativity”.

These compositions, he further explains, “reference layers of meanings; race, gender, history, memory, time and beauty”. To him, these interactions between colours, transparencies, words, and textures are like “calculated accidents”, whose “outcomes are sometimes better or worse than I foresee”.

In his recent installations (which are well complemented by his photographs and performances), the viewers discern his self-staged images with colourful pointed conical headgears, which evoke the trademark costumes of the White supremacist group Ku-Klux-Klan. But, Udemba would rather that these works be seen as his way of interrogating “issues of societal hierarchy, stereotype, diversity, tolerance, inclusion, and respect”.

“While these interventions echo diverse references and imaginations,” he notes, “they also open platforms to engage critically with each other on some sensitive issues about how we deal with one another within the global and local community.”

The foggy delusions of political correctness nourish the rather simplistic and naive expectations of the sudden disappearance of colour lines in a racially-diverse world. Indeed, the tendency to be unpleasant or even aggressive to people of other races cannot be wished away with freeflow of cant. As an artist, who straddles two worlds – his native Nigeria and his new home, Germany – Udemba is afforded a privileged glimpse of two societies with their good and bad sides.

His legendary fascination for, and adherence to, the post-modern canons of aesthetics lends wings to his creative flights of fancy and puts him in good stead to engage these issues bordering on racial relations. Yet, the obvious tenuous grasp of these core issues – evident in the incoherence of the randomly pasted collages – can only profer superficial solutions.

Now, it must be noted that a racially-diverse world is not an arbitrary happenstance and fits into the natural order of things. Then, the fact that people of like nature tend to unite according to the dictates of the natural law makes the mystery of racial consciousness more comprehensible. Conflicts arising out of the interactions between the races has a lot more to do with individual tendencies than the colour of their skin. Undeniably, it takes evil in one person to recognize evil in another.

Besides, a malevolent person of one race, who imputes evil motives on the actions of people of another race draws his suspicions from out of himself. Otherwise, he would never be able to recognize it in them. Of course, a pattern of behaviour associated over the time with a particular race may develop from a past misdeed of a person or group of persons of that race. This results in aversion for them.

An inward change of attitude or sustained virtuous conduct of a people will always attract the people of their kind, who share the same values as them. As for the malevolent ones among the migrant community, they would stick out like sore thumbs in this community and could easily be expelled as outcasts.

Even where there are racial similarities between the people of two countries, there are no guarantees against prejudice. UNESCO has observed how xenophobia and racism tend to overlap in their manifestations even when their root causes differ. An example is the xenophobic attacks in South Africa against African migrants, which since 1994, have resulted in several fatalities. Another is the Nigerian government’s expulsion of illegal immigrants, most of whom were Ghanaians, in 1983.

Of course, the natural law of the attraction of similar species has also been noticed among the people of the same race living in the same country. In such cases, it is often a case of an ethnic group feeling superior to another or it may be a conflict of interests between two or more groups. Ultimately, a global problem of fear or hatred for what is perceived foreign assumes a local dimension adapted to its peculiarities.

There are the same suspicions of the others of different ethnic identity, which sometimes swells into the desire to eliminate them to safeguard their host communities’ purity or identity. This explains the inter-ethnic strifes in Nigeria between the Fulani herdsmen and local farmers of different ethnic stocks, between groups like the Tivs and the Jukuns and the sporadic clashes between communities sharing the same ethnic identities.

It is in the nature of things for homogeneous groups to seek itself preservation by avoiding mixing with other races. For, indeed, every race has the potential to mature and grow strong through its efforts at self-ennoblement. The distortion of the instinct for self-preservation, which need not be unpleasant or life-threatening, is the fault of man alone.