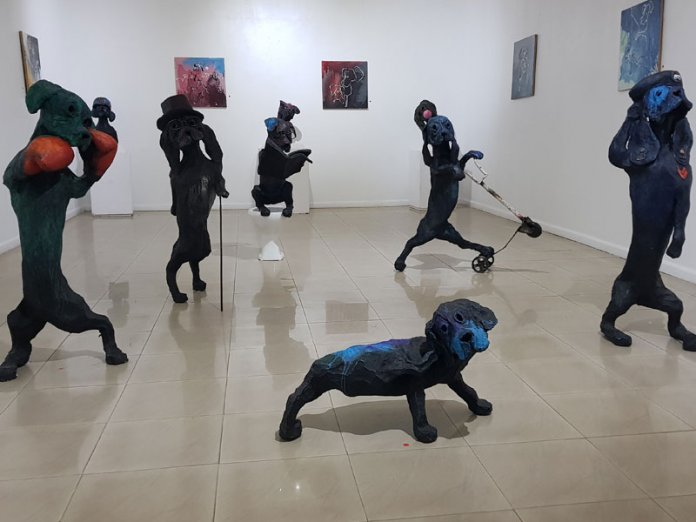 Collectors and artists recently trooped into the National Museum, Onikan, Lagos, in their numbers to celebrate an array of modern African art works in the solo exhibition themed: ‘Raw Intuition’.

The works, which were a collection of sculptures and paintings, stood in their magnificence round the room. The sculptures were hung on three sides of the wall – the paintings on two sides while others were sat on stools and shelves respectively.

The artist behind the works, Philips Nzekwe, who was tutored under the renowned contemporary artist, Mr. Bruce Onobrakpeya, told THISDAY at the event that the works were his own way of expressing himself and telling his narrative of the human story.

According to Nzekwe, the ‘Curious Mind’ series is an attempt at drawing the attention of the public to the needs and potentials of the child as he brings to the fore the ideals of self-expression which he believes is crucial for life in the 21st century.

“Curious Minds looks at the needs of the child which goes beyond mere facial expression because a child may not be happy but puts up the face that he is okay and things are well.

“A lot of things go on in the mind. In our society for example, one cannot express himself. As adults, we cannot talk about how we feel about this country. It is the same problem we face as children that is carried on into adulthood. One is confronted with series of questions and one does not have an answer to them,” he said.

Putting it succinctly, the curator of the exhibition, Ms. Ngozi Okwedi, said that the work encourages exploration beyond surface appearances and the discovery of latent human potentials, which has hitherto been buried in the mind.

The lazy dog series on the other hand is an allegorical rendition of everyday life of people. Using dogs to represent humans, Nzekwe tells the story of human being as they move through various stages of their lives.

Speaking with THISDAY about life as an artiste, Nzekwe said: “Art is a lifestyle. As an artiste, you’ve got limitations and I really don’t look at that. I just play. Everything around me, nature has provided for me.”