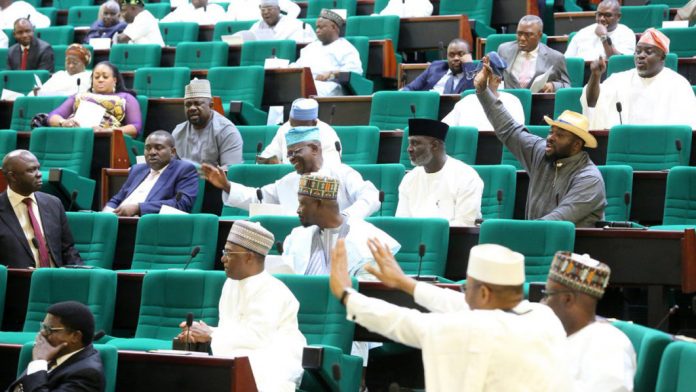 A constitution alteration Bill seeking to include and place free, compulsory and universal basic education under Chapter IV of the constitution of the1999 constitution as amended has passed the second reading in the House of Representatives.

The Bill sponsored by the Speaker, Hon. Femi Gbajabiamila, sought to make free, compulsory universal basic education a fundamental rights under the constitution, considering various reports relating to the rate of illiteracy in Nigeria.

The Chief Whip, Mohammed Monguno, who read the bill on behalf of the Speaker, said a country cannot develop when a chunk of her population still wallows in illiteracy.

He said sadly, various statistics show that the level of illiteracy in Nigeria is still very alarming, adding that it is therefore widely believed that high rate of illiteracy accounts for the low level of development in Nigeria, and that the development of any nation depends largely on the quantity and quality of all segments of its population.

Monguno said a report in the Vanguard newspaper published December 7, 2018 suggests that 38 per cent of Nigerians are illiterates, describing it as worrisome as Nigeria cannot develop if nothing is done to educate all its citizens.

He added that a recent declaration by the National Commission for Mass Literacy, Adult and Non-formal Education (NMEC), as reported in a THISDAY publication of April 12, 2019, that 35 per cent of the nation’s adult population is illiterate despite the launching of Universal Primary Education (UPE) about 33 years ago, and the huge amount of money invested in education.

The chief whip noted that the country cannot remain relevant in the world of business and politics if the government cannot secure or guarantee basic education for the people.

He said that the best and fastest way of achieving this is to make free, compulsory basic education a fundamental right of every Nigerian.

Monguno explained that there is already in existence the Compulsory, Free Universal Basic Education Act 2004, stressing that ordinarily, free and compulsory basic education is not a fundamental right under that Act.

He pointed out that a Federal High Court in 2017 presided by Justice John Tosho, in a suit filed by Legal Defence and Assistance Projects against the Attorney General of the Federation (AGF and Ministry of Education, held that: “By the combined effect of section 18(3)(a) of the 1999 Constitution and section 2 (1) of the Compulsory, Free Universal Basic Education Act, 2004, the right to free and compulsory primary education and free junior secondary education for all qualified Nigerian citizens are enforceable rights in Nigeria.”

Monguno noted that having regard that the judgment is that of a High Court that might be overturned anytime, hence, legislators as representatives of the people must take steps to give credence or constitutional backing to the judgment of the court.

According to him, “The passage of this Bill does not in any manner whatsoever prejudice the existence of the Compulsory, Free Universal Basic Education Act, 2004.”

He said that the Constitution Alteration Bill, if passed, can only be enforced perhaps with damages in case of a breach, the 2004 Act criminalises violation of certain provisions of the Act with prescribed punishment.

Monguno noted that parts of section 18 of the constitution are still saved under chapter 2 as general provisions concerning education at all levels, stressing that this provision cannot be enforced.

In his contribution, the Deputy Minority Leader, Hon. Toby Okechukwu, said that while the education of the citizens is very key, the quality should not be compromised.

On his part, Gbajabiamila said the bill sought to make compulsory free basic national education policy across board, stressing that as alluded to by a speaker, it had been experimented in the South-west in years past and the region benefited a lot from it.

He said that no child should be left behind, as education is the key to unlock so many minds.