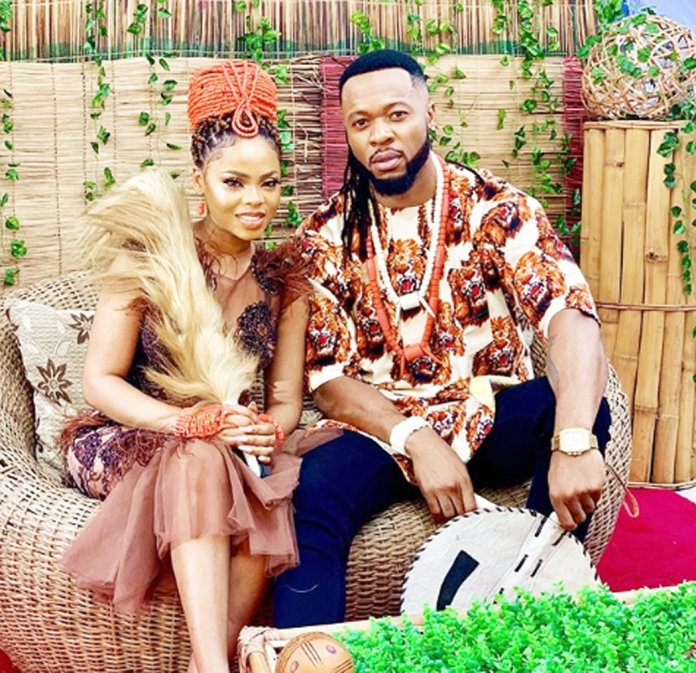 In continuation of their musical love story weeks after dropping their sensational “40 Years Everlasting”, a 5-track Extended Play (EP), highlife singer, Chinedu “Flavour” Okoli and songstress Chidinma Ekile, have unveilled a new movie titled, “40yrs Lovestacle”. On the EP, Flavour and Chidinma are lovers who make solemn promise to each other in the single track ’40 Yrs’, a beautiful afro-dance song. With a video, that was released as lead for the EP.

Prior to the release Chidinma had stirred reactions after she posted a photo of herself with Flavour in Igbo traditional wedding attire and captioned it with a love emoji. The catchy photo generated mixed reactions from some of her followers with one claiming the singers have had a secret wedding.

The new love story about Chidinma and Flavour in “40yrs Lovestacle”, which is inspired by their collaborative album “40 Yrs Everlasting”, captures the beauty about love and unity, and likewise particulars of the wedding custom within the Igbo tradition.

The family in some cases come as obstacle between the intending couple. The notion exists that the Igbos are known for selling their daughters out when it’s time for marriage, the girl family presents crazy list to the family of the man that wants to marry their daughter, demanding for large list of items. This is what the movie for their EP is all about and makes for an interesting watch for everyone! Both acts have in recent times been cast in different Nollywood productions be it in music videos or movies.

For Flavour, his music videos are often Nollywood themes as in ‘Golibe’, which he featured former most beautiful girl in Nigeria, and now his second baby mama, Anna Ebiere Banner. Also the video to his song ‘Nnekata’, shot by acclaimed filmmaker Tchidi Chikere has a Nollywood setting that tells a tale of youthful love in a serene Kingdom somewhere in the south east.

Flavour, well known for his ability to sing fluently in the Igbo language, other than being a prolific figure in the music industry, also has talents in some unlikely fields. For instance, he is known to have tried his hands in acting and has actually done some productions. He has played simple or supporting roles in a number of Nollywood films but is yet to play a leading role in any major film.

Same for Chidinma, who played a new bride in a video to the song ‘Oyoko’ by indigenous rap artiste, Zoro. She also had featured in the upcoming movie titled, Love Me alongside Kizz Daniel. Most of the movies she has featured has to do with love. The singer/songwriter starred in her first movie, The Bridge, alongside Nigerian actor Demola Adedoyin. In the film directed by Kunle Afolayan, Chidinma plays Stella, a young lady from a distinguished Igbo family, who falls in love with and secretly marries a Yoruba prince named Obadare against her parent’s wish.

Although she had always wanted to act, she didn’t expect it to come as quickly as it did.

She said, “I just got a call from Kunle Afolayan. He didn’t know before then that I wanted to act. I even asked him, ‘Why did you call me? I don’t understand.’ He said, ‘You’re a musician; you shoot music videos,’ and from the way he saw me on screen, he thought that I would at least know a few things and if I had any challenges, he would definitely put me through. I got on set and it was one of the best things I’d ever done. I definitely loved the experience.”