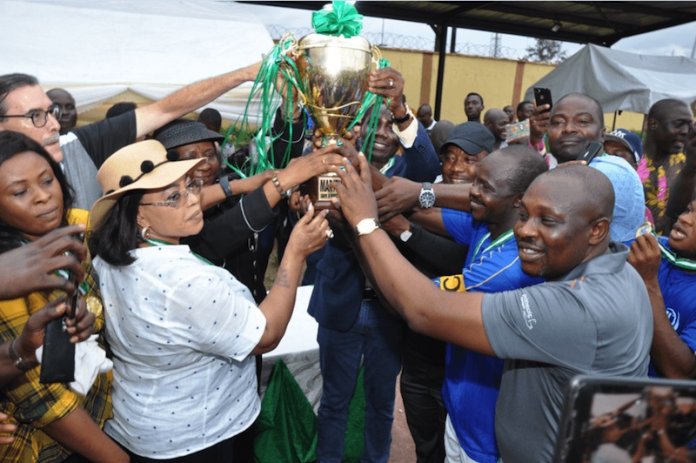 ENL Consortium, operators of Terminals C and D at the Lagos Port Complex Apapa, on Friday defeated a terminal operator at the Tin Can Island Port, Josephdam Ports Services (JPS), to lift the 2019 Maritime Cup.

In addition to winning the trophy, ENL also went home with a cheque of N1million courtesy of the organisers.
The tension-soaked match, which was watched by the chief executives and top managements of both organisations, stretched beyond 90 minutes into penalty shootout.

Josephdam opened score in the 17th minute of play through its top striker Akinbirin Peter while ENL’s equalizer did not come until the second half precisely in the 54th minute through Uche Sunday, bringing the score to 1-1 at full time.

During the penalty shootout, ENL converted all its seven kicks to goals while Josephdam was only able to convert six out of seven.
ENL won the trophy for the first time in the 11 years of the annual competition.

ENL did not particularly have a smooth ride to victory as it had to battle top-rated teams to advance to the final match. It defeated two of its Group A rivals, Dangote Ports Operation 5-0 and Higher Pacific International (HPI) 2-1, and played a 1-1 draw with Nigerian Ports Authority (NPA) to qualify for the semi-final.

Josephdam’s Chibueze Hardy and Tosin Omoruwa won the Most Valuable Player and Best Goalkeeper respectively of the tournament while the Fair Play award was won by ABTL.

The Executive Vice Chairman/CEO of ENL Consortium, Princess Vicky Haastrup, who was at the pitch to cheer her team to victory, commended the players and officials for their professionalism.

“This is a great competition and I am happy to be here. It was a tension-soaked match and as you could see, I was on my feet all through and I am happy we lifted the trophy for the first time,” she said.