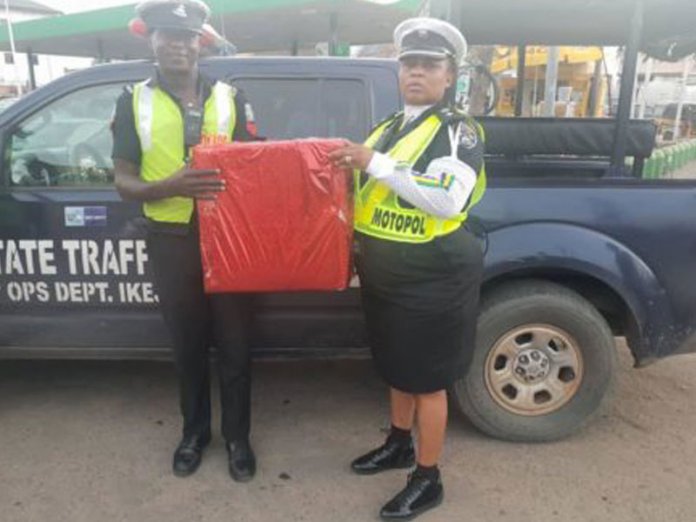 The Officer in charge of the Lagos State Traffic (MOTOPOL), CSP Titilayo Oriyomi, has rewarded another police officer, Sergeant Akatu Owoicho, at Oba Akran Avenue, Ikeja, for resilient efforts towards traffic management in the state.

According to Oiyomi, few weeks ago when she rewarded, Inspector Jumai Musa at Maryland, she promised Lagosians that it would be a continuous exercise to encourage traffic officers to be dedicated in their duties.

“When I rewarded a female police officer at Maryland, I told my officers that our duty is to free Lagos of gridlocks, and that I would reward anyone who key into my vision of ‘free Lagos of traffic’. I went around Lagos and spotted a few good officers doing wonderfully in traffic control, and today, I have come to give honour to whom it is due.

The Motopol boss also pointed out the mandate given to her by Lagos State Commissioner of Police, Zubairu Muazu, on the current traffic state in the state

She said: “During this rainy season and ember months, he has given me the task to free the state of traffic; he wants the people to move freely in the state, as well as a free flow of traffic. So anyone who helps to free traffic is my friend, and I will extend my appreciation to the person.

“It is painful that after many hours in the office or business centre, one would end up in traffic, and it may be as a result of bad road, but I think the state government is addressing the issue by repairing some bad potions, as there will be an improvement in the flow of traffic.”