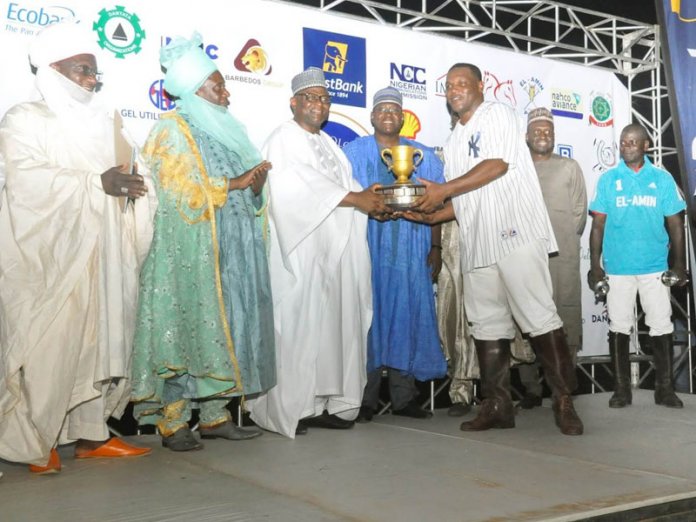 The huge involvement of Nigeria’s premier banking giants, First Bank Nigeria, in the development of the noble game in Nigeria and beyond, has received official commendation from the Traditional Council of Katsina State.

Chairman of Katsina State Traditional Council and Emir of Katsina, HRH Alhaji Abdulmumuni Kabir Usman who made the commendation, praised First Bank for partnering Kaduna Polo Club in the promotion of the noble game and for positively touching the lives of Nigerians in so many ways.

The Royal father who is also the Life Chairman of the Nigerian Polo made this declaration at the legendary Murtala Sqaure Polo Ground, venue of the ongoing Georgian Cup Centenary Polo Tournament in Kaduna, noted that the partnership with the noble game of polo has positively

impacted the promotion of sports generally around the country.

He stated that the unequalled involvement of First Bank in the promotion of polo and sports spanning a century in Kaduna and other states of the country has helped in redirecting the energies of the youth and engaging them positively.

He expressed happiness at the commitment of the banking giant to achieving this milestone of a century long sponsorship, and urged the foremost banking institution to do more, given the unifying and the diplomatic credentials of sports in Nigerian political history.

“We the entire Nigerian polo family are happy with First for engaging our youths positively in the area of polo and I would urge them not to rest in this highly commendation partnership that turns our people away from negative tendencies,” the royal father stated.

Former military Governor of Kaduna State, Col. Dangiwa Umar (rtd,) who salute First Bank on the centenary milestone, expressed delight at the huge turnout for the prestigious festival confirmed that “First Bank has been at the forefront of sports development with several sponsorship initiatives spanning polo, golf, soccer, amongst others,”.

Umar, who is the Chairman Board of Trustees of Kaduna Polo Club, pointed out that the landmark collaboration has already impacted positively in the development of polo and sports generally in the country.

We are tapping into the passion that people feel for the game to bring to the front burner, the need to develop our sporting sector, so that in our little way, we can contribute to making life better for Nigerians,” he added.
Expressing the Bank’s delight on the sponsorship, the Group Head, Marketing & Corporate Communications, First Bank of Nigeria Limited, Folake Ani-Mumuney said “2019 is indeed an eventful year for us and one of the many highpoints since we were founded 125 years ago.

Part of our excitement stems from the pride we feel at having supported the Georgian Cup Polo Tournament for 100 years consistently.
“We are indeed proud to achieve this feat as it reinforces our leadership role as an institution committed to the continued growth and development of sports and the economy at large. The Georgian Cup Polo Tournament is one of the many heritage sporting sponsorships
supported by First Bank over the years.”
The international polo fiesta is bracing for a glamorous climax this weekend with the finals of El-Amin Cup, Emir of Katsina Cup, Imani Cup and the Georgian Cup which has remained the biggest polo prize in
Kaduna for a century now.