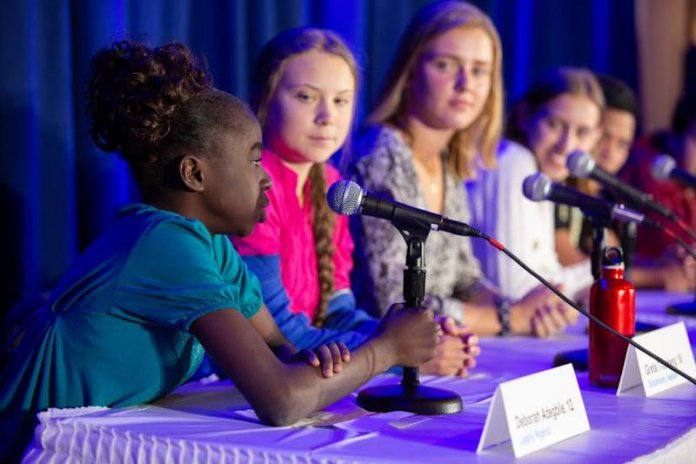 Sixteen young people from around the world have petitioned against Argentina, Brazil, France, Germany, and Turkey in a groundbreaking legal complaint about climate change with the United Nations Committee on the Rights of the Child.

The youth petitioners are between the ages of eight and 17 and hail from Argentina, Brazil, France, Germany, India, Palau, Marshall Islands, Nigeria, South Africa, Sweden, Tunisia, and the United States.

According to a 17-year-old petitioner from South Africa, Ayakha Melithafa, “People who are older aren’t paying as much attention because they will not be as affected. They don’t take us children seriously, but we want to show them we are serious.”

Their petition showed how five regional leaders and G20 members, namely Argentina, Brazil, France, Germany, and Turkey have failed to curb emissions while continuing to promote fossil fuels in spite of their knowledge about the risks of climate change for decades.

The petitioners alleged that without the leadership of these five countries, the global effort to solve the climate crisis cannot succeed even though climate crisis was caused and is being perpetuated by the actions and inactions of all states.

The youth activists narrated the impact of climate change on their own lives, including brushes with death and loss of neighbors from wildfire or flooding. They claimed that climate change constituted a threat to traditional ways of life such as reindeer herding or fishing and capable of causing significant health hazards such as dengue fever, malaria and asthma.

They also stated that harmful effects of climate change include hardships from drought, air quality and poisoned marine life as well as mental anxiety or depression about the present and future.

The petition calls on states to immediately take binding international cooperative action to limit global warming to the levels identified by science. It used expert analysis and personal narratives to demonstrate how the effects of climate change, such as hurricanes, droughts, sea-level rise, the collapse of food systems, and other threats, “have violated and will violate each petitioner’s human rights by threatening their physical survival, impairing their physical and psychological development, and harming their health.”

The petitioners gathered in New York to participate in a press conference, hosted by UNICEF, introducing the petition and their demands. They will also be participating in the Global Climate Strike, and various other events surrounding Climate Week, the United Nations Climate Action Summit and UN General Assembly.

“Climate change is not a problem which any country can solve on its own. All the countries must join their hands together to solve this crisis as it is a global issue,” said Ridhima Pandey, an 11-year-old petitioner from India.

Their petition was prepared and filed on behalf of the youth climate change activists by the international law firm, Hausfeld LLP and the nonprofit environmental public interest law organization Earthjustice.

The five respondent countries have agreed to a communications procedure that gives the Committee the authority to receive legal complaints from children whose rights have been violated.

“Without transformational change in the next decade, the human rights impact of climate change on the Petitioners and more than 2 billion other children will be locked in and irreversible,” said the Chairman of Hausfeld, Michael D. Hausfeld. “What we all must do now is: talk less, act more.”

Among the petitioners is Greta Thunberg, a Swedish student climate activist, who sparked a global youth climate action movement through her Fridays for Future school strikes in 2018. Greta is joined by Alexandria Villaseñor, a fellow American activist who co-founded the U.S. Youth Climate Strike.

Alexandria, inspired by Greta, conducted her own Friday climate protests outside of the New York United Nations headquarters. The other petitioners are devoted activists and educators in their home countries.

“The climate crisis is a children’s rights crisis,” said Scott Gilmore, a human rights lawyer at Hausfeld. “The current path of global warming will leave today’s children with an unlivable world”

“Earthjustice is proud to present the message of these inspiring young people in the United Nations Committee on the Rights of the Child,” said Ramin Pejan an Earthjustice staff attorney who is co-counsel for the petitioners. “Young people from around the world have been speaking up loudly and clearly about the climate crisis. It’s time to take meaningful and urgent action.”

From the 45 nations signed on the optional protocol, the petition is directed at the biggest climate polluters among the signatories comprising Argentina, Brazil, France, Germany, and Turkey. The Committee is made up of 18 independent child rights experts.

It will determine if the complaint is admissible and if so, will gather responses from the countries named in the complaint. The Committee will then make recommendations to those nations.