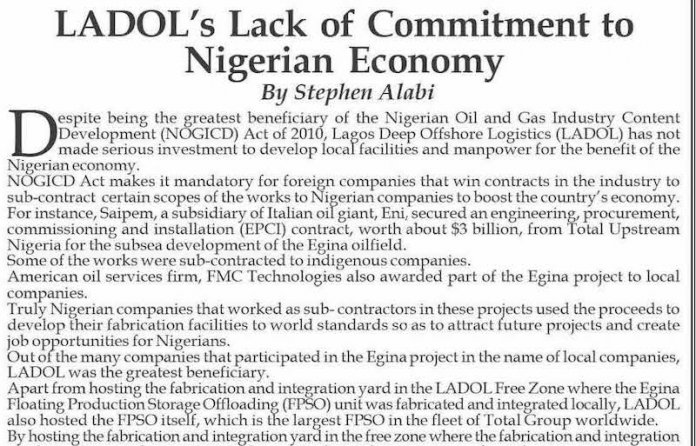 Despite being the greatest beneficiary of the Nigerian Oil and Gas Industry Content Development (NOGICD) Act of 2010, Lagos Deep Offshore Logistics (LADOL) has not made serious investment to develop local facilities and manpower for the benefit of the Nigerian economy.

NOGICD Act makes it mandatory for foreign companies that win contracts in the industry to sub-contract  certain scopes of the works to Nigerian companies to boost the country’s economy.

For instance, Saipem, a subsidiary of Italian oil giant, Eni, secured an engineering, procurement, commissioning and installation (EPCI) contract, worth about $3 billion, from Total Upstream Nigeria for the subsea development of the Egina oilfield.

Some of the works were sub-contracted to indigenous companies.

Truly Nigerian companies that worked as sub- contractors in these projects used the proceeds to develop their fabrication facilities to world standards so as to attract future projects and create job opportunities for Nigerians.

Out of the many companies that participated in the Egina project in the name of local companies, LADOL was the greatest beneficiary.

Apart from hosting the fabrication and integration yard in the LADOL Free Zone where the Egina Floating Production Storage Offloading (FPSO) unit was fabricated and integrated locally, LADOL also hosted the FPSO itself, which is the largest FPSO in the fleet of Total Group worldwide.

When the FPSO arrived at the LADOL Free Zone in Lagos from South Korea, LADOL attracted the official visit of Vice President Yemi Osinbajo.

The company made promises of future investments in the free zone before the vice president and also enjoyed major headlines in the media.

Unfortunately, unlike the truly Nigerian companies that invested heavily in the development of their yards for future projects, LADOL cannot boast of employing more Nigerians since the FPSO sailed away.

Rather, it devoted its resources to fight foreign companies that invested in the free zone, thereby hurting Nigerian economy.

No wonder recent media reported have questioned its indigenous status.

While Aveon Offshore, Doman Long Engineering, Nestoil, Niger Dock and other truly Nigerian companies that worked on the Egina project have re-invested their proceeds to create opportunities for the employment of Nigerian youths, LADOL can’t boast of such investments.

Perhaps, the revenues the company generated from the project were repatriated to its foreign owners as being speculated by the industry stakeholders.

LADOL was also privileged to be among the companies that used indigenous status to access the federal government’s Nigerian Content Intervention Fund but how the fund was utilised is known to only LADOL and its foreign promoters.

Sadly, the company has refused to use the privileges it has enjoyed under the Nigerian Content Act to help create job opportunities for Nigerians by partnering foreign companies in a win-win situation.

Instead, LADOL has been taking steps that will throw more Nigerians into the labour market by chasing away foreign companies and damaging Nigeria’s economy.

While local companies are building alliances with foreign companies and investing heavily to take advantage of future opportunities, LADOL’s hostile attitude is chasing away foreign investors.

Without foreign companies coming into Nigeria to help transfer technology and develop local capacity, it will be difficult for Nigerians to grow the capacity and skills to execute complex and challenging projects.

Until the Nigerian government and its agencies take practical steps to identify the real and truly Nigerian companies, the country’s economy will continue to experience challenges.