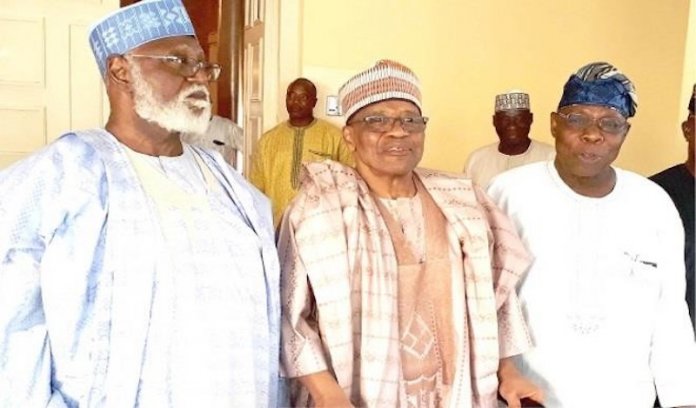 Considering the enormity of the challenges confronting governance in Nigeria and the strenuous commitment of President Muhammadu Buhari to brave the odds and remain undeterred in providing responsible leadership, what an awesome difference it would make if our most prominent elder statesmen – Yakubu Gowon, Olusegun Obasanjo, Ibrahim Babangida, TY Danjuma and Abubakar Abdulsalaam – individually and sincerely resolve to partner with President Buhari in the herculean task of overcoming the problems as soon as possible.

Even without going into the semantics of definition, these five prominent elders and former leaders are regarded by generality of Nigerians as fathers of the nation by virtue of their unique antecedents in the political history of the country. In the same context, none of these people can conscientiously look away from the fatherland in its hour of need after occupying the highest office in the land and deriving the most beneficial privileges of their positions. They have often urged the people to contribute to national unity, progress, peace and prosperity as good citizens, they can only concur when the people demand that to whom much is given, much (more) is expected.

Apart from these civic obligations, these gentlemen and officers are additionally enjoined by professional persuasion to uphold the bond of espirit d’corps that commits them to stand by each other as comrades, in or out of uniform, in the national interest. This bond is particularly overriding in expressing and exhibiting unalloyed loyalty, not just to the fatherland, but also to the Commander-in-Chief, as the symbol of professional and national leadership, as the case may be.

The collective commitment to maintain professional rapport and loyalty to the leader was a major pillar on which the solidarity of the armed forces was sustained throughout the long era of military rule in the country, irrespective of the often violent coups that punctuated the period. It was certainly the focus of the dynamics for the forced final withdrawal of the military from political control of the government in 1999, which tele-guided the transition to civil rule with an imprisoned retired army general and former commander-in-chief, getting express pardon and an anointed party to lead the way-and provide covering fire for safe retreat!

The situation today, with President Buhari virtually on his own in a twist to the tale that saw at least three “comrades” adopting a rebellious posture, is a sad commentary on the genuineness of the concerned officer-gentlemen’s avowed obligation to uphold national interest, espirit d’corps and loyalty to the commander-in-chief, especially in trying times when the nation from which they extracted maximum benefit, expects and deserves support. Nigerians are left wondering whether entitlement to the prestigious honour and highest patriotic laurel conveyed in the conferment of elder statesmanship has not been betrayed by the elevation of personal, political and parochial pursuits above the national interest.

General Yakubu Gowon remains the standard bearer in consistent commitment to the national interest exemplified by persistent preachment of unity, peaceful co-existence, nationalism, ethical values, respect for constituted authority, law and order, good governance and Godliness. The general has been an icon for elder statesmanship who is seen as the architect of the rapid post-civil war normalization of strained geo-political ties with his famous “no victor, no vanquished” and reconciliation, rehabilitation and reconstruction advocacy and policy thrust as Head of State. He has been a sincere supporter of his military and civilian successors, lending his voice in advocacy to promote optimism in trying times. He has avoided opportunistic self-righteousness and blended constructive comments with motivational speeches thereby promoting positive attitudes to governance challenges.

Former President Ibrahim Babangida remains a reliable reference point in the continuing quest for lasting solutions to national challenges by bringing his acclaimed unique experience and insight on the perspectives of politics, government, peoples of Nigeria and leadership to bear on his well-timed contributions to discourse. He even takes responsibility for issues relating to his tenure in office in a refreshing departure from the buck-passing, know-it-all tendencies of some elders.

No one need telling of the status of General TY Danjuma on the elder statesmanship arena because he has withdrawn from the obligation to maintain espirit d’corps and demonstrate loyalty to the Commander-in-Chief, especially in trying times, that Nigerians expect of him. The one-time legendary war hero and no-nonsense army general could not remain the same after becoming the effortless inheritor of a sprawling oil-block, half of which earned him so much money after selling it to the Chinese! Retaining the other half as an inexhaustible source of inestimable wealth, the general has since become a philanthropist at home and smiling stakeholder in international five- star hotel business, among other acquisitions. But Nigeria today is at the receiving end of Danjuma’s terrifying tantrums and with venom even against his military constituency.

Ex-President Olusegun Obasanjo needs no introduction in the desecration of espirit d’corps that earned him a second stint as military-packaged civilian president. His capacity for exuberance even where adolescents would go limp is exasperating. Sadly, General Abdulsalaam has lately succumbed to the self-righteous stupor what with a “roundtable” without a constituency!

Perhaps it is just as well that President Buhari soldiers on without the disguised distraction of deserters who, unlike him, no longer regard themselves as fathers of the nation but look away from the fatherland in its hour of need, turn deaf ears to the peoples’ demand, that to whom much is given, much is expected besides violating the bond of espirit d’corps that commits them to stand by each other as comrades, in or out of uniform, in the national interest.