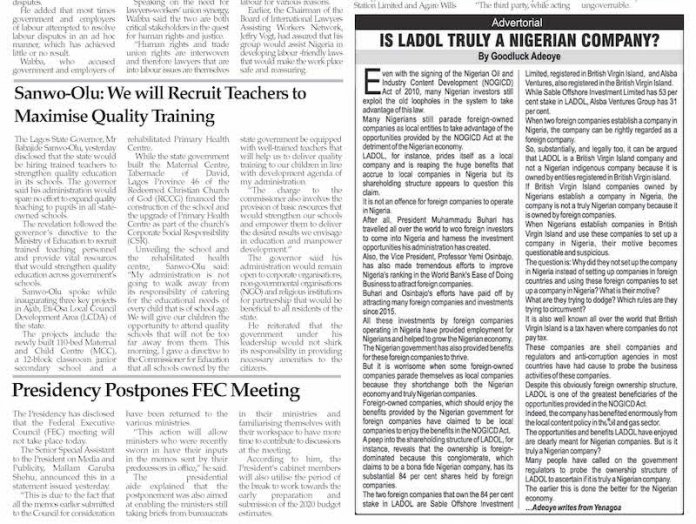 Even with the signing of the Nigerian Oil and Industry Content Development (NOGICD) Act of 2010, many Nigerian investors still exploit the old loopholes in the system to take advantage of this law.

Many Nigerians still parade foreign-owned companies as local entities to take advantage of the opportunities provided by the NOGICD Act at the detriment of the Nigerian economy.

LADOL, for instance, prides itself as a local company and is reaping the huge benefits that accrue to local companies in Nigeria but its shareholding structure appears to question this claim.

It is not an offence for foreign companies to operate in Nigeria.

After all, President Muhammadu Buhari has travelled all over the world to woo foreign investors to come into Nigeria and harness the investment opportunities his administration has created.

Buhari and Osinbajo’s efforts have paid off by attracting many foreign companies and investments since 2015.

All these investments by foreign companies operating in Nigeria have provided employment for Nigerians and helped to grow the Nigerian economy.

The Nigerian government has also provided benefits for these foreign companies to thrive.

But it is worrisome when some foreign-owned companies parade themselves as local companies because they shortchange both the Nigerian economy and truly Nigerian companies.

A peep into the shareholding structure of LADOL, for instance, reveals that the ownership is foreign-dominated because this conglomerate, which claims to be a bona fide Nigerian company, has its substantial 84 per cent shares held by foreign companies.

While Sable Offshore Investment Limited has 53 per cent stake in LADOL, Alsba Ventures Group has 31 per cent.

So, substantially, and legally too, it can be argued that LADOL is a British Virgin Island company and not a Nigerian indigenous company because it is owned by entities registered in British Virgin island.

If British Virgin Island companies owned by Nigerians establish a company in Nigeria, the company is not a truly Nigerian company because it is owned by foreign companies.

When Nigerians establish companies in British Virgin Island and use these companies to set up a company in Nigeria, their motive becomes questionable and suspicious.

It is also well known all over the world that British Virgin Island is a tax haven where companies do not pay tax.

These companies are shell companies and regulators and anti-corruption agencies in most countries have had cause to probe the business activities of these companies.

Despite this obviously foreign ownership structure, LADOL is one of the greatest beneficiaries of the opportunities provided in the NOGICD Act.

Indeed, the company has benefited enormously from the local content policy in the oil and gas sector.

Many people have called on the government regulators to probe the ownership structure of LADOL to ascertain if it is truly a Nigerian company.

The earlier this is done the better for the Nigerian economy.

Food Security: Group to Train Youths on Agricbusiness in Kwara