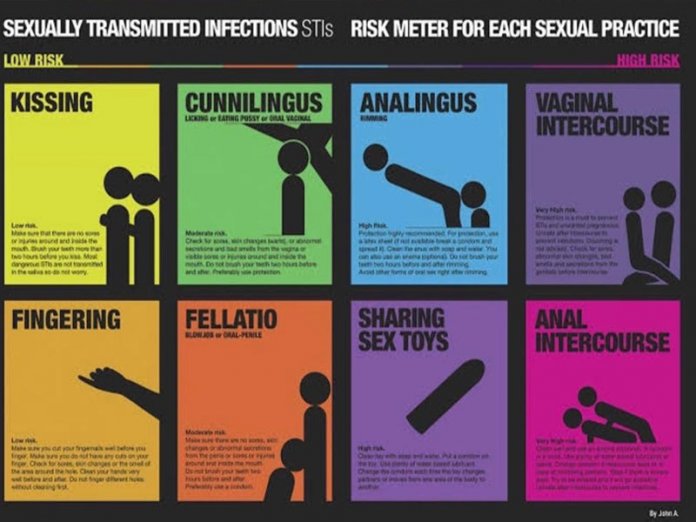 This week we will be discussing types of sexually transmitted diseases

This infection is said to be highly contagious, it is usually caused by a type of the herpes simplex virus (HSV) that enters the body through small holes in the skin or mucous membranes. Herpes infection may be associated with reduced sperm count and the virus may make it harder for men’s bodies to produce sperm. When signs and symptoms are noticeable, the first few weeks are generally the worst. Some people never have a second episode. Others, however, can have recurrent episodes for decades.

When present, the initial symptom of genital herpes usually is pain or itching, beginning within a few weeks after exposure to an infected sexual partner. After several days, small red bumps may appear. They then rupture, becoming ulcers that bleed. Eventually, scars form and the ulcers heal. In women, sores can erupt in the vaginal area, external genitals, buttocks, anus or cervix. In men, sores can appear on the penis, scrotum, buttocks, anus or thighs or inside the tube from the bladder through the penis (urethra). Herpes viruses have been found inside of sperm cells.

The easiest ways to prevent HPV are to abstain from unprotected sexual intercourse, use condoms, practice safe sex, regular health check-up and pap smears. There is no treatment for HPV. However, HPV infections often clear up by itself. Men and Women that are infected with HPV have no symptoms, although some may develop genital warts.

Contracting HPV doesn’t decrease a woman’s chances of becoming pregnant. However, if women is pregnant and have HPV, it is advised that treatment should be delayed until after delivery. However, in some cases, HPV infection can cause complications.

There are hormonal changes that occur during pregnancy and this may cause genital warts to grow and in some cases, the warts might make a woman bleed more than usual and usually make a vaginal delivery difficult. Also, when genital warts block the birth canal, a C-section usually is required. A woman with HPV can pass it on to her baby and can cause the child to have a condition called respiratory papillomatosis whereby the child can develop HPV- related growths in their airways after birth

Chlamydia is a bacterial infection of the genital tract. It is hard to identify because infections in the early stages often trigger little or no symptoms. When symptoms do develop, they often include pain during sex and or urination pain, greenish-yellowish penis or vagina discharge and lower abdomen pains. They often are gentle and mild, leaving them easy to ignore.

How then does chlamydia lead to Infertility: It causes a large amount of swelling in the fallopian tubes. This scar then blocks the tubes and then prevents the sperm from swimming into the uterus. The issue arises in the fallopian tubes and is regarded as a cause of tubal infertility. Systemically, even if a woman no longer tests for an active chlamydia infection positively, the bacteria can move into the top genital tube from the cervix and detonate pelvic inflammatory diseases (PID).

Gonorrhea is the most prevalent sexually transmitted disease (STD). Also referred to as “Clap”, it is a bacterial infection from a bacterium called Neisseria gonorrhoeae. Even though it is spread through sex, a man doesn’t have to ejaculate in order to pass it on to his partner. There is no symptom in many individuals with gonorrhea. But when symptoms arise, it usually occur within ten days of exposure and there is usually a cloudy discharge from the penis or vagina, colour may be white, yellow, or green, more frequent urination than normal ,itching /sore throat and  anus. Hazy or bloody nipple or vagina release, painful and or burning sensation while urinating, heavy menstrual bleeding, spotting between periods,abdominal pain. Some people may be infected before signs begin to show.  Though it can be successfully treated with antibiotics, it is becoming harder to treat as antibiotic-resistant strains have developed in recent years.

Chlamydia just as in the case of Gonorrhea has also been shown to cause problems with sperm health in many men,  when left untreated, can lead to infections of the urethra, prostate gland, or testicles,pelvic inflammatory disease (PID) causing damage in  the female reproductive organs- the uterus, ovaries , and fallopian tubes. Together, gonorrhea and chlamydia are the leading causes of preventable infertility around the world….. TO BE CONTINUED NEXT WEEK