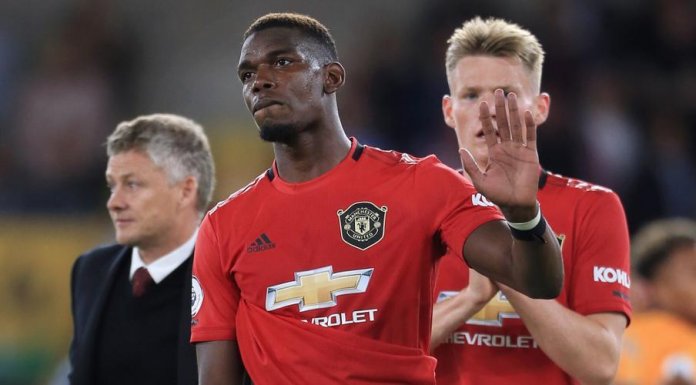 Manchester United said they “utterly condemn” the racist abuse their World Cup-winning midfielder Paul Pogba received after he missed a penalty in the 1-1 draw with Wolverhampton Wanderers on Monday.

The 26-year-old Frenchman has missed four penalties since the start of last season – the most by a Premier League player – while teammate and fellow penalty-taker Marcus Rashford has converted all four of his attempts in that time.

Pogba was assailed on social media, becoming the third player in England to have received racist abuse in the past week due to missing a penalty.

United said they were “disgusted” by the abuse and “utterly condemn” it.

“The individuals who expressed these views do not represent the values of our great club and it is encouraging to see the vast majority of our fans condemn this on social media also,” the club said in a statement.

“Manchester United has zero tolerance of any form of racism or discrimination and a long-standing commitment to campaigning against it through our #AllRedAllEqual initiative.

“We will work to identify the few involved in these incidents and take the strongest course of action available to us. We also encourage social media companies to take action in these cases.”

Chelsea’s Tammy Abraham and Championship side Reading’s Yakou Meite have suffered similar abuse in the past week.

Abraham missed the crucial penalty in the shootout loss to Liverpool in the Super Cup last Wednesday. The posts aimed at him were described as “abhorrent” by Chelsea and manager Frank Lampard said he was “disgusted”.

Lampard also called for social media sites to do more to prevent players being abused while Abraham has said he wants to “silence the haters” with his performances on the pitch.

Five others were excluded for periods of between one and two years for abusive language.

Ivory Coast international Meite missed a penalty in time added on for Reading on Sunday against Cardiff but his side had the match already wrapped up at 3-0.

Some of the tweets aimed at Pogba were later deleted while several accounts appeared to have been taken down.

Twitter’s terms and conditions say it “takes action against behaviour that targets individuals with hateful conduct”.