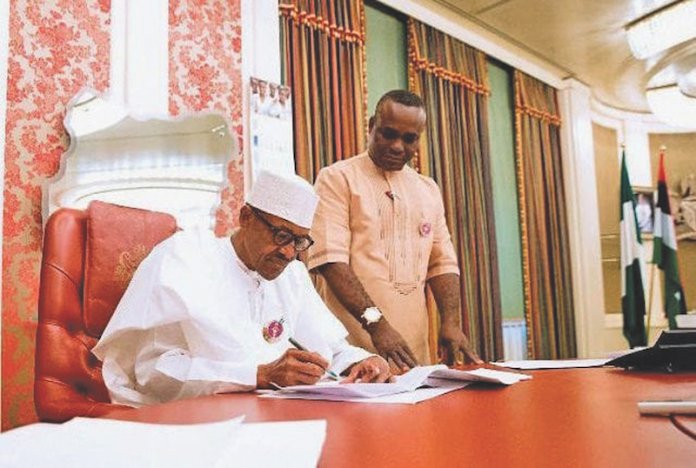 The rumoured removal of Senator Ita Enang as President Muhammadu Buhari’s aide at the senate had a good run for the period it lasted, report Deji Elumoye and Shola Oyeyipo

In the thick of the celebration of the Eid el Maulud festival by Muslim faithful in the country last week, an on-line news medium had reported the ‘sack’ of the Senior Special Assistant (SSA) to the President on National Assembly Matters (Senate), Senator Ita Enang.

Immediately, the media landscape was awash with the information but the snag was the inability to confirm the story from government quarters probably due to the public holidays observed to mark the ‘Ileya’ festival on Monday and Tuesday, last week.
Upon enquiry, presidential spokesman, Garba Shehu, claimed the Secretary to the Government of the Federation, Mr. Boss Mustapha, was in a better position to talk about the issue but not a single word was heard from Mustapha on the matter.

But by last Wednesday, which was the first working day after the Sallah holiday, the rumour still remained unconfirmed. On that day, Senator Enang, was not only at the Presidential villa in Abuja but also disclosed to State House reporters that President Buhari had signed two bills passed by the Eighth National Assembly into law.
The same day, the presidential liaison officer was busy attending to official matters at his ground floor office at the Senate wing of the National Assembly.

Enang, a former Senator from Akwa Ibom State, who was appointed into office in July, 2015 failed to pick calls and reply text messages, when the news first broke. He also refused to comment on his rumoured removal while speaking with reporters both at Aso Rock Villa and the National Assembly.

Sources told THISDAY that there were actually plan to remove Enang but kept on hold at the last minute. It was gathered that government appeared not to be comfortable with his recent disclosure that the federal government had earmarked N2.2 billion in this year’s budget for the contentious Rural Grazing Area (RUGA) scheme.
]Enang’s remarks on RUGA also elicited reaction from the public, who condemned the move as against the earlier announcement of the suspension of the RUGA project.

The Southern and Middle Belt Leaders Forum (SMBLF) had queried why the government was not going ahead with RUGA in some northern states that had accepted the policy if the idea was not about grabbing land in the South and Middle Belt states.
“The whole policy has equally opened our eyes to the reason why the president has been harping on local government autonomy now and then. The strangers, who would be given settlements under RUGA would soon take over the local governments, where they are allotted lands with autonomy over the spaces.”

Meanwhile, amidst the confusion occasioned by the rumour of Enang’s removal, the Senate President, Dr. Ahmad Lawan, had earlier this month hinted of plan to reintroduce the National Water Resources Bill, rejected by the Eighth National Assembly.
Lawan, who spoke in the course of the screening of the 43 ministerial nominees, who are now Ministers-designate, said the Ninth Assembly was ready to re-introduce the bill which was vehemently opposed by Senators from the South in the 8th Senate.

Then Senate Minority Leader, Senator Godswill Akpabio, had mobilised his colleagues from the South to shoot down the executive bill, which had passed the second reading. The belief of Akpabio and other concerned Southern Senators was that the bill was meant to empower the federal government with control over all water resources passing through the states.

Now, with Akpabio now a member of the ruling All Progressives Congress (APC) and a Minister-designate, the Senate President announced that the Assembly was ready to receive the executive bill if represented as soon as possible. This news too generated reactions from some Nigerians, who warned that the federal lawmakers should not entertain the bill.

Reacting to the proposal by Senate President Lawan, Afenifere, through its National Publicity Secretary, Mr. Yinka Odumakin, charged the federal lawmakers not to allow the bill to see the light of the day.

According to him, “I say welcome to the ‘next level.’ When they promised next level many people did not know what they meant. The last Senate was semi-free and many of their agenda could not pass through that Senate. Now that they have a rubber stamp assembly they are now in a hurry to rush everything.

“The whole idea of the Water bill is in continuation of their internal colonialism agenda – to use the might of the federal government to takeover and annex the resources of people, especially in the Niger Delta area and other parts of the country.
“There has been this thing about off shore, on shore dichotomy, which they now want to erase by saying once federal government has access to that there is no boundary anymore.

“That the Senate President is asking that they should bring it back and that they have the person who opposed it in the 8th Senate has also been annexed into the ruling party to pursue this agenda – they want to rush everything.

“I just hope that the Senators from all the areas bordering water should know that people will not smile at them if they allow this kind of bill to pass. And all those who believe in justice along this water should stand up against this obnoxious act,” he said.
Also, lending his voice to the issue, National Chairman, Middle Belt Leaders Forum, Dr. Bitrus Pogu, said his people are not in agreement with government on the issue of Water Resources Bill, just as they are against the RUGA Settlement Project.

“With regards to that, the middle belt is totally opposed to that view. Already, we know that so many people have been brought in trailer loads and settled along riverbeds in the whole country, even rivers that are tributaries to the main ones.
“In Borno, we know River Hawul, in Adawama, Rogo, Benue, Benue River; people have already been brought and settled down and some of them we believe are not even Nigerians. So, that bill, if passed, is just like RUGA.

“Taking over land and giving it to these people they are importing into the country for what God knows. We totally disagree with that bill. We will not support it and I know the National Assembly is believed to be rubber stamp Assembly as people are insinuating, but we believe they are going to see reasons not to allow that.
“The land belongs to the state governors and they are supposed to be keeping it in custody for the people. It should remain that way. The Land Use Act should not be changed for any reason. This government should not take advantage of the opportunity to rule to deceive Nigerians and dispossess Nigerians of their ancestral lands,” it said.

Southern and Middle Belt leaders under the umbrella of Southern and Middle Belt Leaders Forum (SMBLF) also urged National Assembly members not to consider any bill from the federal government, which aims to alter the Land Use Act or establish a regulatory framework for the water resources control.
The quartet of Mr. Yinka Odumakin (South West), Prof Chigozie Ogbu (South East), Senator Bassey Henshaw (South-south) and Dr. Isuwa Dogo (Middle Belt), in a statement said the suspension of the RUGA project was just to buy time to repeal the Land Use Act, which vests land in state governors.

The concerned leaders, who have not minced words in their disapproval for the policy, said: “We insist that the only condition that will make us relax our opposition to the Ruga sectional policy is its outright cancellation and not suspension.”
The SMBLF also warned the Senate President to stop debasing the Senate in his bid to convince the Executive arm of government that he is a rubber stamp.

On its part, the Pan Niger Delta Forum (PANDEF) also rejected the reintroduction of the Water Resources Regulatory Bill.
Its National Secretary, Dr. Alfred Mulade, said the bill was not only provocative, but the most insensitive to the national mood and an assault to the collective aspirations of Nigerians of goodwill to take the country out of the woods. It added that the Bill was a step towards the destructive slope of internal neo-colonialism and it must be resisted.

“Fortunately for Nigerians, the Bill has suffered a major setback in the Senate as it not only polarised the lawmakers, but it was seriously criticised by majority of them as an idea that will balkanise Nigeria and further jeopardise the nation.

“The Bill, which seeks to regulate the nation’s water resources portends too many dangers for the Niger Delta. It runs the same gamut with how the region’s crude oil resources were annexed by the federal government through obnoxious laws.
“Today, the Niger Delta region is in socio-economic and political thralldom owing to the federal government’s seizure of its crude oil resources. The proposed Bill will further encroach on the land and other timeless heritage of the Niger Delta people. It is a strategy for dispossession,” it stated.