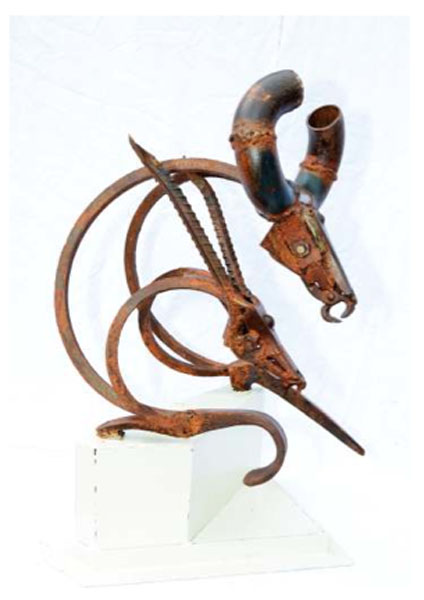 Reflected in the exhibition are the artists’ diverse backgrounds and experiences. It is also an eclectic collection works in various artistic media, including drawing, paintings, sculptures, installations and mixed media. “The eclecticism is also vividly embodied in the thematic thrust of the works, as they address issues directly from iconic moments in the novel or from the African experience in the colonial and postcolonial periods,” explains a press release from the organisers.

Hence, most of the works in the exhibition appropriated social issues relating to religion, politics, intolerance, war, culture and (under)development as part of their creative resource. This is why the exhibition is seen as a celebration of post-coloniality in Africa, with Things Fall Apart as the centralising spin-off.

Based on the cultural conflict between the colonial masters and the colonised subjects, the relevance of the novel’s content and essence resonates in the present. This is especially so for a continent that is still plagued with violence, corruption, war, hunger religious intolerance and warped democracies. “The situation continues to evoke that uncertain note on which Achebe ends the novel, that frozen moment when the authentic Africa yields to the glory and triumph of Empire, giving birth to a fleeting, but totalising and conflicting hybridity that has no end,” the organisers add in the press release. “While the situation calls for concern as it relates to the harsh realities of the human condition in these parts, it has also provided creative resource for artists at various times and from different standpoints.

To this extent, as Things Fall Apart attains 60, it is pertinent to pay homage to its continued relevance and the sagacity of its legendary author through this exhibition whose thematic visions draw from the novel and some of the social realities in postcolonial Africa.”
The exhibition, featuring a maximum of five works from each artist, has been on since October 2018. Organised as a travelling exhibition, it has already held last year in Awka and recently in Abuja this year.
––Adepuji writes from Lagos.