Chinedu Eze writes on the implication of the influx of undocumented immigrants, mostly from neighbouring countries, to security in Nigeria

The Nigerian Immigration Service (NIS) is facing a huge challenge in South West Nigeria, especially in Lagos state, where reports indicate that hundreds of people are brought in from West African countries like Mali, Niger, Togo, Senegal and others who arrive Nigeria without documentation and who take advantage of the porous borders between Nigeria and the aforementioned countries.
Security experts and officials of the Nigerian Immigration Service said the infiltration of these illegal migrants who are unskilled and largely uneducated constitute security threat to Nigeria and investigations have shown that many of them who operate commercial motorcycle, known as okada are usually armed.

Porous Borders
An investigation carried out by THISDAY has revealed that porous Nigerian borders, which are not effectively manned by Immigration has led to the influx of these people. THISDAY learnt that about 700 young, uneducated and unskilled boys come into states in South Western Nigeria, every week and take up mainly medial jobs like polishing shoes, operating commercial motorcycles, hawking cheap goods and others.

The source also said that the movement of these illegal aliens who are largely in their teens, 20s and 30s is organised by transporters who bring them in articulated vehicles and drop them in Lagos, Ogun states and other places.

“Some of these boys riding okada in Lagos are from Niger Republic. Some of them carry dangerous weapons and they are not hiding that they are from neighbouring countries. What are our people manning the borders doing, you may ask.

“These people are brought into the country in organised manner and there are some businessmen who are making so much money bringing them into the country,” Immigration source told THISDAY.

The source also said ECOWAS Protocol stipulates that there should be free movement policy, but anyone moving from one West African country to another cannot stay more than 90 days, which could be renewed, thus making it legal for such citizen to spend six months.
“According to ECOWAS Protocol and Free Movement policy, anyone from member country can stay up to 90 days and this could be renewed for another 90 days, which totals six months but beyond that the person would have to seek for residence permit.

THISDAY learnt from some other Immigration officials that many of the officers posted to the borders don’t really show commitment to the job because they are not given the needed tools to efficiently carry out their job.

The officials said Immigration ought to make special arrangement for the officials posted to borders in relation to security because such areas could be dangerous, especially around the smuggling routes.

THISDAY also learnt that in border areas like Katsina, Kebbi and Adamawa people’s movement from Nigeria to Togo, Niger or Chad and Cameroon is easy with checks because many Nigerian communities have close affinity to communities living in the other countries, so it would be difficult to really guard those areas.

Time Bomb
A senior Immigration official described the influx of these young people from other West African countries as ticking time bomb because they could be used to unleash mayhem and from unfolding incidents in some parts of Lagos and the South West, many of them are inclined to violence, a belief that is supported by the fact that many of them are armed.

“There is something Nigerians must know. These people who are coming from the borders are a dangerous time bomb. Immigration does not profile them and they could come in as a decoy to be used later to destabilise the country. Watch carefully you will see that they band together and we have gathered that every okada rider among them has one kind of weapon or another with him. It is even dangerous when you ask them to take you to remote places. So what are our Immigration officials doing? Do they have the logistics?” the insider asked.
There are also reports from eyewitness account how these immigrants who are wrongly called northerners by some Nigerians penetrate and integrate into the country.

An official of the Nigerian Immigration Service narrated how the illegal immigrants come to live in Ogun state.
According to him, they started trickling into various neighbourhoods of Remo, Ogun State since 2017 and people were happy because they provided cheap labour as farm hands, wood hawkers, junk collectors and shoemakers.

“For instance, they also began to scavenge for scraps at the backyard, refuse dumps, inside the forests and even shrines. Yes, they know every inch of pathways, detours and short cuts around.”

“Every day produce and cattle trucks from the north discharge their goods at Ode/Ipara, Ogere and Sagamu Interchange on the Lagos-Ibadan expressway. Curiously hundreds of them disembark at these drop-off points, and within minutes, they disappear and embed themselves. If anyone goes to Sagamu, Ogere, these people have taken over some areas,” the official said.

Need to Protect Nigerian Borders
A report done on Nigeria and the influx of West Africans into the country stated that migration has become a very fluid process, internationally.

Facilitated by globalisation, it has generated a lot of issues resulting in sweeping changes to laws and operations of border control agencies of many countries including Nigeria. The International Organisation for Migration (IOM) had stated that an estimated 240 million international migrants are moving to more destinations via complex and diverse routes, adopting a variety of strategies.
The report noted that the reasons for migration are also varied and complex. Nigeria shares in these global migratory trends, being the largest economy in Africa and the commercial hub of the West African sub-region.

“The dynamic and evolving realities of the Nigerian Immigration landscape necessitated the passage of the immigration Act, 2015 and the launch of the Immigration Regulations 2017. Nigeria remains the largest economy in Africa and the midpoint of economic activities in the West African sub-region with the attendant movement of prospective investors and other migration flows.

“While enabling a safe, conducive and uncomplicated business environment remains the priority of the current administration, the country recognizes the global security challenges posed by terrorism, transnational criminal organizations and the activities of herdsmen from neighbouring countries,” the report said.

The report also noted that the Immigration Regulations 2017, which were issued to give effect to the objectives of the Immigration Act 2015 regarding the security of the Nigerian borders and effectiveness of the Nigeria Immigration Service, empower the NIS to properly register all foreigners, protect the border, enhance internal security and attract foreign investors using the latest technologies.
“Companies with expatriate staff are required to file monthly returns, providing data on expatriate staff and the utilization of the Expatriate Quota Approval, while expatriates are themselves required to file changes in their personal data with the NIS within 7 days of the occurrence of such change,” the report also said.

Fighting Back
But the Controller of Immigration, Lagos State Command, Ekpedeme King, told THISDAY that government was doing something about the movement of the illegal immigrants from West Africa, but noted that it would be wrong to describe their movement into the country as influx.

“They are not going to be documented as citizens but as people living in Nigeria, which is very important for national planning. Once we begin to register, we will be able to capture where they are living and what they do.

“We have carried out survey in Lagos and we are going to commence sensitisation on e-registration. We are going to engage landlords and traditional rulers and urge them to make sure that those living with them are registered.

“We are going to approach them through their associations. We will capture their biometrics. Things have changed. What we do now is immigration management because we have more Nigerians living outside Nigeria than other countries citizens living in Nigeria,” King said.

The controller also explained that Immigration has three levels of controlling immigrants from West African nations and the first is the documentation of their arrival into Nigeria through the stamping of entry in their passports, but for those who come in through the land without passport, Immigration Service has reinforced personnel to monitor their entry to ensure that such movement is controlled; then the third level is through e-registration that is billed to start in Lagos soon.

King, said those who are already in Nigeria who have not documented their entry and who have exceeded the 90 days, must register in the e-registration scheme where they would go through biometrics and their stay in Nigeria would be in the integrated at the command and control database.

“We have punitive measure reserved for those who did not take advantage of the amnesty offer and while there won’t be biometrics for under-aged children, their stay must also be documented so that they will be in the database. These are migrants and what we are doing is migration management.

“The migrant registration is at the place of residence. We are encouraging them to register because it will help in the area of security. The amnesty will encourage people to register,” King also said.
It was expected that Immigration should take urgent action to curb the movement of these young, unskilled and uneducated men who could become a destabilising factor to the peace of the country. 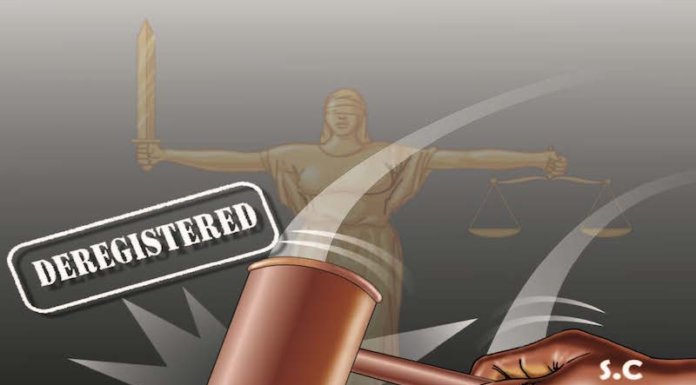