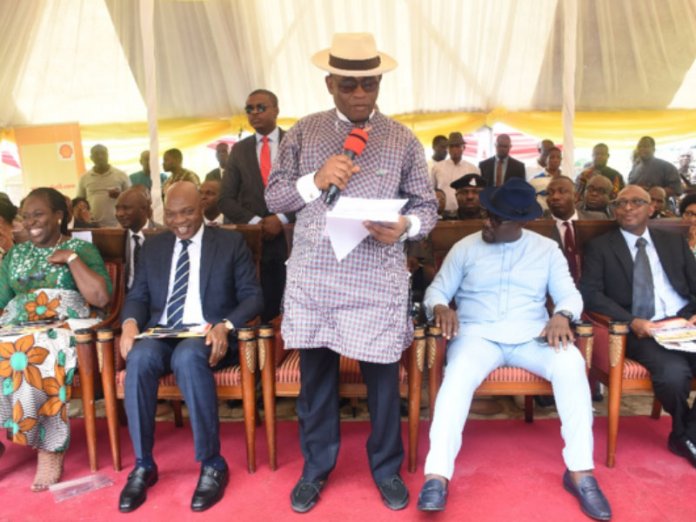 Oloibiri community straddles two important firsts in the history of Nigeria; the discovery of black gold in 1956, which brought the country to limelight and wealth, and 63 years later, it has become the first kingdom to achieve Universal Health Coverage in the entire nation. Martins Ifijeh writes

Oloibiri, a small community in Ogbia Local Government Area of Bayelsa State, straddles two achievements; it is the first kingdom in West African history to hit black gold. By January 15, 1956, oil was discovered in commercial quantity in the kingdom, and this changed Nigeria’s economic status, leading to a flurry of activities; including oil exploration, tourism, and mostly importantly for the country, it changed its status into an oil producing nation.

With an initial production of 5,000 barrels of oil per day (which would later become as much as 2,000,000), Nigeria became the sixth largest oil producer on the chart of the Organisation of petroleum Exporting Countries (OPEC).

63 years after putting the country on the global map, Ogbia LGA, where Oloibiri situates, becomes the first local government in Nigeria to fully achieve Universal Health Coverage (UHC) for its residents.

But just as it presents two firsts, it also presents two different worlds apart. First, by virtue of being literarily an oil well which has also contributed its quota to the development of the country, it is unfortunately also known as a community lacking the basic necessities needed for human capital development.

Simply put, Oloibiri is rich in natural resources but poor in social and human capital development. It is an underdeveloped kingdom that contributed in developing Nigeria.

The King of Ogbia Kingdom, Dumaro Charles Owaba described Oloibiri and other communities in Ogbia as the small but mighty kingdom with enormous mineral and other natural resources, yet lacking all the characteristics of a rich community, as they lacked portable water, good roads, accessible and qualitative healthcare, among others.

It is in changing the contrasting worlds that the Shell Petroleum Development Company (SPDC) through a series of interventions has ensured that the historic Ogbia kingdom achieve UHC ahead of the remaining 775 local government areas in the country.
Speaking during the launch of one of its series of Social Investment Programmes, tagged the Oloibiri Health Programme (OHP) in Ogbia kingdom last week, the Managing Director, SPDC, Mr. Osagie Okunbor described the move as an intervention aimed at ensuring the people of the local government get adequate healthcare provision, as well as basis for human capital development, especially for the vulnerable, including women and children in the community.

He said the intervention includes the remodeling of the Kolo General Hospital, provision of a water treatment plant, medical laboratory equipment at the College of Health Technology, Otuogidi, the provision of Dental Chair for Demonstration Clinic, Otuogidi and a Hybrid Solar Powered System.

“The General Hospital, Kolo will serve as a referral hub providing 24 hours service with linkages to five Health-for-Life Centres and 13 Ward Health Centres,” adding that residents of Kolo, Oloibiri and the entire people of Ogbia can now walk up to the centres and the general hospital to access quality healthcare services.
He said the OHP was an expansive initiative being implemented in three phases.

“What we are doing here today is the first phase. The second phase is in execution, which includes the Oloibiri Health Campus which consist of; Oloibiri Health-for-Life Centre, a Ward Health Centre, and a Knowledge Management and Research Centre. Other components of the second phase are the 0.4 kilometre Oloibiri access road and the Oloibiri Helth Foundation which is primarily to drive the overall sustainability of all projects. All these will be completed by the end of October 2019.
“The third phase will be the establishment of the pilot Ogbia Community Health Insurance Scheme. This will be modelled after the very successful pilot insurance scheme catalysed by the SPDC Joint Venture in partnership with the Rivers State government which is the Obio Cottage Hospital in Port Harcourt. This will anchor the sustainability of the OHP. The scheme will be launched with a one-time contribution from Shell and the Bayelsa State government and will deliver healthcare services using a network of facilities. This is expected to start this December,” he added.

Representative of the World Bank/International Finance Corporation, Dr. Olumide Okunola went down memory lane, noting that over six decades ago, Oloibiri gave Nigeria oil, which has in no small measure provided benefits for the nation.
But he emphasised that the next six decades ahead, globally, will be driven by human capital development. “That is why I am particularly proud of the launching of this programme, because it shows Shell is preparing people in this local government for the next century. Human capital development cannot become reality if the people lack basic healthcare needs, education, among others. I am glad we are already thinking into the future.

“I am particularly excited with this intervention because it shows Oloibiri has made another first. By this gesture, Ogbia local government is the first in the country to achieve UHC”.

Okunola, however called on SPDC, government and other companies to extend the gesture to the remaining 775 local governments in the country, adding that if all regions, including hard-to-reach places get access to healthcare irrespective of their financial status, it will lead the country towards achieving UHC for its 200 million population.

The Regional Community Health Manager and Business Opportunity Manager for OHP, Dr. Akinwumi Fajola said the objective of the programme was to achieve UHC for all members of the community regardless of their circumstances, as well as for the provision of Health System Strengthening.

According to experts, Health System Strengthening is any array of initiatives and strategies that improves one or more of the functions of the health improvements in access, coverage, quality or efficiency.

Fajola said one of the unique features of the Oloibiri Health Programme was that its scope deliberately targets all health system building blocks, adding that this will ensure strengthening of the Ogbia LGA’s health system in an integrated manner.

“Some of the social determinant components of the OHP includes the training of 100 graduates, secondary school leavers and market women. They were also mentored on business development, as well as given grants to start their businesses in the Ogbia special livewire scheme. This is part of efforts to strengthen entrepreneurship and financial access. Already, many have grown their businesses and already have people under their employment,” he noted.

He said the beauty of the OHP was that it complements other state, national and international health programmes, and in particular the Saving One Million Lives (SOML) initiative of the federal government.

The Deputy Governor, Bayelsa State, John Jonah described the move by Shell as noble, adding that the state government will continue to support all interventions needed in addressing healthcare issues in the state.

Jonah, who represented Governor Seriake Dickson, said, “Today’s commissioning shows we have made significant progress in healthcare as a state. There is significant advancement in Bayelsa healthcare system because we put premium on the system. This is a blue print for Nigeria. I applaud Shell for initiating and funding this.”

On his part, the LCT General Manager, West, Central and French Sub-Saharan Africa, GE Healthcare, Eyang Ebai said the programme was a unique and trail blazing initiative that has not been done before in Nigeria, adding that as expected, innovative ways of doing things were not always easy at the beginning, but eventually bring better results.

He said: “Today’s commissioning shows we have made significant progress, and the foundation is now set for continued development of the healthcare system in Ogbia LGA and the region at large.

“On behalf of GE Nigeria, we firmly believe in the potential of the OHP and remain committed to its vision, as we address key challenges in the primary and secondary healthcare space across the country. This is aligned with the global purpose as a company to improve lives in moments that matter,” he said.

While no doubt the kingdom continues to yearn for more achievements, will the gesture by Shell lead to the human capital development they seek? Will they meet Sustainable Development Goal on maternal and child health, should the country expect the best brains to emerge from Ogbia in the nearest future? The sustainability of the projects and the support by the government and the people will play a major role in this.