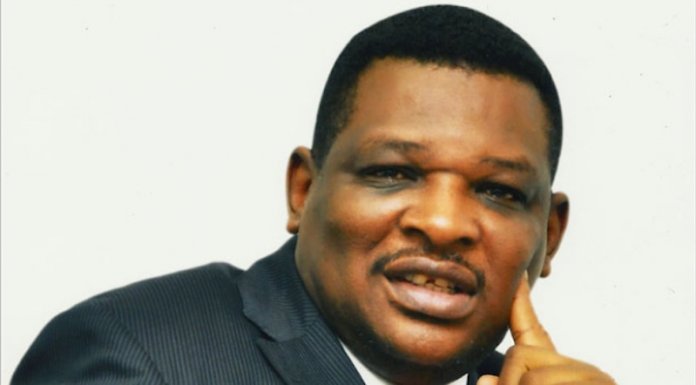 As was the case of the former Minister of Transportation, Rotimi Amaechi, when he was nominated as minister in 2015, a few disgruntled individuals have set out to tarnish the hard-earned reputation of one of the most accomplished Nigerian and a technocrat of note, Mr. Goddy Jeddy-Agba, for their selfish political gains, writes Eromosele Abiodun

As President Muhammadu Buhari indicates plans to assign portfolio to the 43 ministerial nominees after successful screening by the Senate last week, the usual game of destroying individuals for fear of the reforms, no nonsense and due diligence that they will bring to bear in their ministries has began. In 2015 after his name was mentioned among ministerial nominees by Buhari, a faceless group had emerged with baseless accusations as to why the now former Minister of Transportation, Hon. Rotimi Amaechi, should not be appointed a minister of the federal republic. The President chose to ignore the lies and went ahead to appoint Amaechi the Transportation Minister. His stellar performance as minister is clear for all to see.

When Buhari released the names of the 43 ministers recently, critics said the list was dominated by politicians and not technocrats. Shockingly, the same critics who demanded technocrats be included in the ministerial list have now gone behind faceless groups to destroy the reputation of some individuals for political gains.

For instance, an online medium last week published a petition written by people of questionable character stating that one of the ministerial nominee, Mr. Goddy Jeddy-Agba, was doing the ‘dirty’ deals for Alison-Madueke when he was former Group General Manager (GGM), Crude Oil Marketing Division (OMD) of the Nigerian National Petroleum Corporation (NNPC).

What the petitioner, who obviously failed do his home work because of the rush to satisfy his pay masters on their mission to stop Jeddy-Agba at all cost, did not know is that Jeddy-Agba retired from the NNPC in principle because of the pressure put on him to do wrong, which he bluntly refused. How many Nigerians today will rather lose their jobs than carry out illegal orders?

To add insult to injury, the petitioner alleged that Jeddy-Agba has been friends with the Chief of Staff to president Buhari, Mallam Abba Kyari. For the avoidance of doubt, Abba Kyari and Jeddy-Agba never knew each other from Adam. According to sources in the presidency, Mallam Kyari only saw Jeddy-Agba for the first time while he was being screened by the Senate.

Former colleagues of Jeddy-Agba told THISDAY that he is a man who would rather lose everything he has than soil his hands in any way or form. His associates testified to this when contacted

“Jeddy-Agba is a man of discipline and integrity based on the security checks and scrutiny relevant security agencies have done on him before his name was sent as ministerial nominee to the Senate by President Muhammadu Buhari, who has been a man in the vanguard against corruption, ”said an associate who do not want his name in print.

As a bureaucrat, Jeddy-Agba started his federal civil service work as Assistant Secretary II with the office of the head of service, federal secretariat Ikoyi in September 1984. By October 1984, he was posted to the department of health services, federal capital territory, Garki, Abuja, as assistance secretary II. In October 1985, he was reposted back to Lagos as a senior assistant secretary to the federal development authority, Lagos Liaison Office where he worked for two years. By the end of October 1987, Jeddy-Agba was promoted as the deputy liaison officer, federal capital development authority, Lagos Liaison Office, Lagos State. He worked under this capacity till April, 1989, when he was carefully selected as the personal assistant to the honourable minister of special duties under the presidency, state house-Lagos. He was later selected, in December, 1990 to serve as the personal assistant to the honourable minister of state for foreign affairs, ministry of foreign affairs, Abuja. A position he occupied until January, 1993, when he was again, selected to serve as the personal assistant, honourable secretary of state, ministry of petroleum and mineral resources, federal secretariat, Ikoyi. In November 1993, he became the head of market research, crude oil marketing department, NNPC. He remained at that position until in 1995 when he was appointed the head gas/gas liquids/condensate sales, GGLU Crude Oil Marketing Department, NNPC.

In September, 2012, he was awarded and decorated with a National Honour in the rank of Officer of the Federal Republic (OFR). In his novel, “Stepping Forward with Uti J.D Agba,” published by Bookman publishers, Goddy Jedy-Agba captured his story while growing up while looking up to his father in shaping his life. Who and what he has become today is a product of a very long plan.

It will interest Nigerians to know that Jeddy-Agba is the first son of HRH Uti J.D. Agba, the paramount ruler of Obudu Area Council reputed to be the longest serving traditional ruler in Cross River State. Agba’s father has been on the throne for over 50 years and he is a three-time chairman of the State traditional council.

This notwithstanding, Jeddy-Agba has remained humble and a man of modest means. Recently, he decided to shun grandiose celebration and observe his birthday in a low key fashion. Jeddy-Agba shunned merriment and pageantry with the modesty and unabashed sensitivity of nobility. The former NNPC topshot is certainly not cut out for celebrating birthdays. He would rather add value to people’s lives and stay quiet. Although family and friends tried their best to throw soiree for the new year, but that is not him.

Jeddy-Agba, his associates said, remains unpretentiously modest and humble to all and sundry irrespective of status boundaries and divides.

THISDAY learnt that while at the NNPC, he was respected by all because of his drive for probity and integrity. At a thanksgiving service in honour of Mr. Goddy Jedy-Agba at the St. John Catholic Parish, also at the amphi-theatre at   NNPC Towers in  Abuja, a few years ago, former Group Managing Director of the Nigerian National Petroleum Corporation, Mr. Andrew Yakubu, said, “I met Jeddy-Agba long ago. The first time I called him was from Warri when I was having problem with something on the job. The way and manner he quickly promised to fix it and the urgency with which he solved the problem attracted my attention and since then I have taken note that he is a very diligent and competent worker. I do not wish people like this to leave the NNPC, but at this juncture we cannot keep him anymore, he wants to leave and we have to let him go. That is the reason I suspended every other thing to be here today, I usually don’t do this for everyone.” It worthy of that Agba was the first non- chief executive of the corporation to be so honoured.

Also speaking at the service, a former colleague Aisha Abdulrahman Okene, also praised Jeddy-Agba’s initiative while he worked in the NNPC and applauded his capacity to initiate and executive innovative policies that positively affected the fortunes of the NNPC.

On her part, Mrs. Rose Essiet, a Senior Manager in the Crude Oil Marketing Department, told the audience that she was happy that her path crossed that of Jeddy-Agba as she not only benefited from her official role with him, but also from quality advice on general issues.

This is the man a few undesirable elements, whose stock in trade is to destroy perceived enemies for political gains, want to put in the gutter.