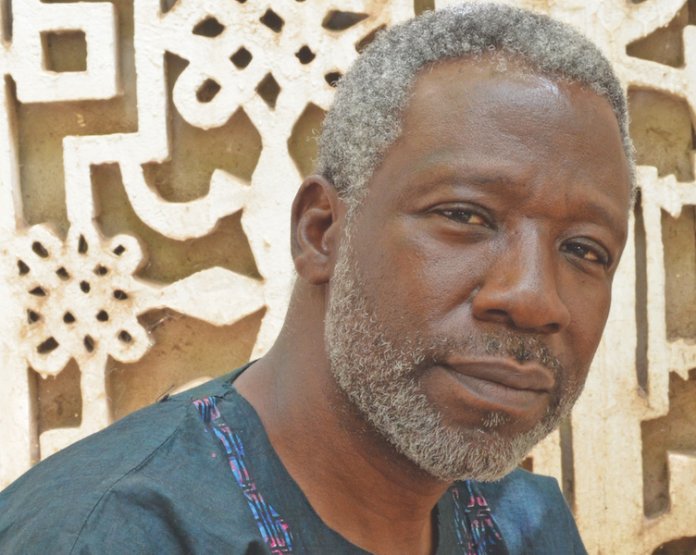 Jerry Buhari was gripped by a fit of creative restlessness. This was shortly before his 60th birthday on July 11. An inner urge flared up in him, prodding him to return to figurative painting. And this was an artist, whose conceptual takes on reality had become legendary!
Still on this inner urge, it morphed into a special interest in biblical stories and edged him towards wanting to explore the meaning and purpose of life, using the Bible as reference material. “I am constantly trying to find new ways of seeing life,” he discloses in a recent online chat. “My main interest since 1990 has been to study how man relates to planet earth or his environment.”

It had all started with a very realistic landscape painting, depicting a forest being ravaged by human activities. Following on the heels of this work, titled “Homo Sapiens Were Here”, were other landscape paintings, which were conceptual in their rendition. Later, there were the installation works, which were contrived with different kinds of materials and objects like stones, fabric, wood, pots, antic chairs, waste plastics and sticks, among others.

Sometimes, he recalls, he had had to collaborate with termites to produce some works. “I do this by handing over the logs of wood to termites and when they have ‘worked’ on them for a period time, I would retrieve … and finish [them] off. There are works that would often situate [them] in rivers, cliffs by the sea, beaches and inside the bush. Here, my childhood in my village Akwaya [in Kaduna State] and Andy Goldsworthy’s Rivers and Tides have nourished my inspiration.”

Looking back now, the Ahmadu Bello University, Zaria-based professor acknowledges that he had blundered in many areas of his life and wishes he could reverse them. “Creatively speaking, there were many paintings and artworks that I was pregnant with, that were aborted, because I failed to deliver them,” he recalls. “If there was any painful regret I have in my creative life, this perhaps is one of them. These were works that came when I was encumbered with university administration and committee work. It was a heavy price to pay. So, I envy artists who live off their work, exclusively.”

On his art practice, he says that it is driven by energies rather than by principles. One of them is the desire to stay sane in a country that he finds very nightmarish. “There are many things, so many things, that I experience in our country that I have refused to accept or understand,” he explains. “In order to stay sane, I create a world on my canvas or in my installations that I use as survival strategies.”

Take a two-square-centimetre miniature watercolour painting he titled “Landscapes of the Soul”, for instance. In this work, he escapes into delicate, almost microscopic, landscapes in which he is able to create order and lives that are sensitive, humble and hopeful.
Back to the word “principle”, he declares himself weary of its use, both in his art practice or in his teaching. “Principles kill art; they are prison cells on creative expression,” he argues.

Easily one of the most recognisable – if not the most prominent – figure of the Zaria Art School, Professor Buhari would rather the spotlight be beamed on the exploits of the institution than on his own personal achievements. “I can point to some legacies of Zaria Art School, most of which are obvious and well documented. Take for example the members of the Zaria Art Society and their colleagues; these personalities represent in a very profound way the watersheds, ponds, rivers that created the tributaries of contemporary modern art in Nigeria. Before them, you have such humble legends like T. A. Fasuyi and Solomon Wangboje.”

Still on the institution, he says: “Zaria Art School will be remembered as the place, where art was used as a tool to fight for cultural and political freedom from colonialism and westernisation. Through ‘Natural synthesis’ we learn how we can domesticate foreign culture and create hybridity in creative production. Perhaps, one of the secrets of the vibrancy of the Zaria Art School is its Nigerianess. A truly Nigerian art school, where all the geopolitical zones of the country are constantly represented in all admissions, whether at undergraduate or postgraduate level. Interesting also is [the fact] that most of the graduates are dispersed to different corners of the globe, making the school a truly universal art school.”

It was in July 1977 when Buhari first gained gained admission into Ahmadu Bello University’s Department of Fine Arts. This was for a pre-degree course. According to University of Nigeria, Nsukka’s Professor Krydz Ikwuemesi, who delivered the keynote address during the recent celebrations of Buhari’s birthday, this was when he “re-chose” art after art had chosen him “at a very tender age to become one of her liveliest acolytes.”

He had majored and graduated in painting and returned to the tertiary institution in 1982 as a graduate assistant. Here, he subsequently held many positions, earning an MFA along the way, before becoming a professor in 2008. He had in 2007 also been a visiting lecturer at two US-based universities – the Kansas Wesleyan University and the Savannah College of Art and Design – and in 2008 at the University of Nigeria, Nsukka.
He belongs to such professional bodies as the Society of Nigerian Artists (SNA), Nigerian Society of Education through Art (NSEA), The Arts Council of the African Studies Association (ACASA), Aftershave International Artists Workshop, The Pan-African Circle of Artists (PACA) and Bridgethearts.com and has held several solo and group exhibitions both within and in far-flung places outside Nigeria.

Now, thanks to experiences that left their traces in his consciousness, he now sees things differently. To the younger generation of artists, he believes he owes an apology “for killing creativity in them” whenever they approached him and his contemporaries for direction. “I will advise them to follow their dream, be bold, adventurous but be responsible. I will advise them to seek fulfilment in life beyond the material and add things of life that endure; like honesty, service, humility, and sensitivity. I will advise them to be suspicious of success defined by material things, money. I will advise them to see success in having a good relationship with neighbours, giving and forgiving.”

The artist, who has bagged many prestigious awards, is currently a consultant/advisor to the Kavita Chellaram-run Arthouse Contemporary Limited and a board member of the Arthouse Foundation. Through these two different, but related bodies, he has gained deeper insights into the contemporary Nigerian art scene. Auctions and special exhibitions, he argues, have promoted the growth of contemporary art in Nigeria, besides giving it and the artists international visibility. He also notes that through these Arthouse Contemporary Limited-organised events, Nigerians have not only gained deeper appreciation of their contemporary art, but also invest in it.
As for the Arthouse Foundation-organised international artist residency programmes, he argues that they “have created networking for artists across geo-cultural spaces or divides” and “have expanded and deepened perspectives, understandings, networking and collaborations among artists within and outside the country.”

On the issue of the pricing of artworks, he says it is problematic. “This will never end. You know that we have similar contentious discussions even in well-developed art markets. Ours may appear more obvious for some of the following reasons: the fledging market, lack of established structures, unstable economy, and perhaps, more importantly, a weak critical art historical discourse. But ‘Nigerian factors’ are also at play.”

Acknowledging that the favourable auction prices could make a young artist become overexcited, fall into illusions and delusions as well as become disoriented and disillusioned, he adds: “Without proper management assistance, a young artist may dance to strange music. This is what I mean by the absence of established structures. Some people have observed that prices are often arbitrary. I agree with this observation. But, what is rational about art, anyway?”
Pix: Jerry Buhari.jpg and The Couple. 2016. Coffee, sand & charcoal.jpg