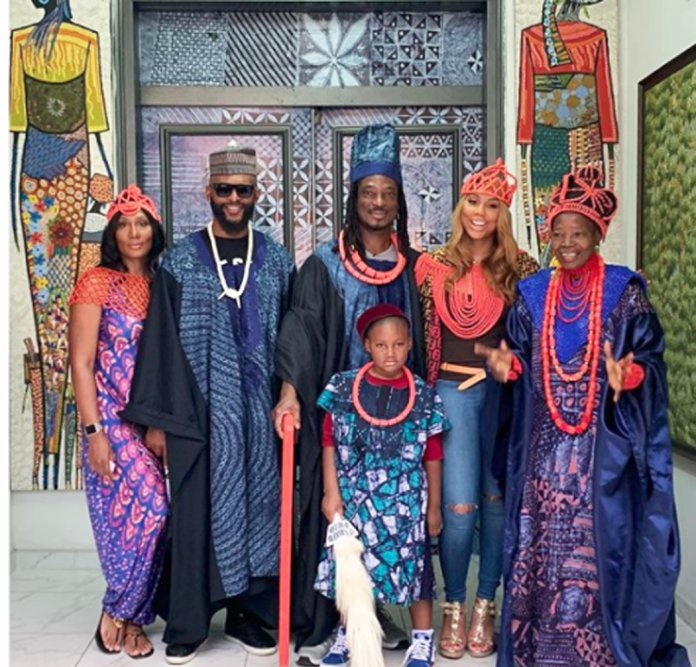 Tamar Braxton, singer and sister to American R & B star, Toni Braxton, is in Lagos with her Nigerian boyfriend David Adefeso. Both lovebirds have been seen having a swell time at different places since their arrival, writes Ferdinand Ekechuwu

“Tamar    Braxton and Family jet to Nigeria with Tay’s boyfriend David, to meet his mom.” That drives the title of a recent article about Tamar Braxton’s visit with Nigerian David Adefeso, to his birthplace. The US singer Tamar and Harvard business trained, David have been an item now for a little over a year and are currently in Nigeria. The love circle hovering around the lovebirds seems pretty exciting and increasing rumours of a possible marriage.

Although fans speculations are rife that David may have proposed to her…but neither of the two has confirmed it yet. However, both have waxed stronger since meeting at a birthday party and Tamar once confessed ‘it feels like forever’.

She’s on this trip with her son, Logan Herbert, from ex-husband Vince Herbert. Also on the trip to Lagos is Tamar’s sister, Towanda, Towanda’s partner/music producer, Sean Hall, and one other person identified as Mama Evelyn.

This is Tamar’s first trip to Africa after her divorce. Her tumultuous relationship with Vincent ended after nine years following a divorce she filed in 2017.  Since the duo touched down in the motherland, Tamar and David have visited several places in Lagos and it appears to be fun with David’s reunion with family.

Their roller coaster love ride in Lagos began with a visit to the Nike Art Gallery owned by famous art personality Nike Okundaye where they were greeted with traditional songs and dances which was a spectacle to behold in every bit of it. An excited Tamar would later share a video of the royal welcome her boyfriend was given on arrival at the art place.

Another place of interest the American-Nigerian couple registered their presence was the palace of Oba Saheed Elegushi of Ikate Kingdom in Lekki Lagos. Their visit was not lost on the images of the palace rituals shown when Tamar drank from a potable calabash.

Sure, a homecoming without a Lagos party would seem incomplete in the city known for its excellence as Peter Okoye of the defunct music duo, Psquare hosted David and Tamar alongside her sister, Towanda, in his Lagos home which extended to a club gig.

Disclosing this in a post on his Instagram handle, Mr. P, as he is fondly called, stated that he also invited Nigerian singers, Simi and Teni. Tamar Braxton would return to Instagram to share her trek to meet Adefeso’s loved ones in Nigeria. But a joke about allegations that he was hiding a family of his own came back to bite her.

“And y’all were all paranoid and had me looking for a wife and kids and just kidding. My @david.adefeso is a dream come true and coming home was the best thing I’ve done in a long time. I’m so honored to be a part of this spectacular family,” Braxton wrote in the caption of an Instagram video with Adefeso at what appeared to be a party, the couple donning traditional Nigerian wear.

In her post, Braxton addressed rumors that initially emerged earlier this year that she had been hiding Adefeso’s face from the public eye because he had a wife and kids at home in Lagos, Nigeria. Back in January, when Braxton posted a video of the pair on a boat, fans guessed that there must have been more to why he shielded his face from photos.

The rumors grew louder after Braxton briefly broke up with Adefeso once she wrote on her Instagram story, “I’m single…ready to mingle.”

Tamar is now poking fun at her fans’ claims her man was hiding a wife or two back home, some are still affirming that speculation. “Not trying to be a negative Nancy but in this day and age even the side chick meets the family. Not saying that’s the case here but it definitely happens.”

“One of my cousins… brought his whole side chick to the family reunion…..left his wife and seven kids…home.” Still, others slammed the few who felt there was something insincere about Adefeso.

Nigerians don’t play that nonsense; they prize family way too highly to waste time showing someone not serious to the family.”

Regardless of the in-comments controversy, Tamar is likely looking to soon become Adefeso’s one and only wife. A judge recently granted a request she submitted in April for her to be made single in name only. So, as the details of divorce from Vince Herbert need to be finalised, she’ll soon be able to walk into wedded bliss with Adefeso.