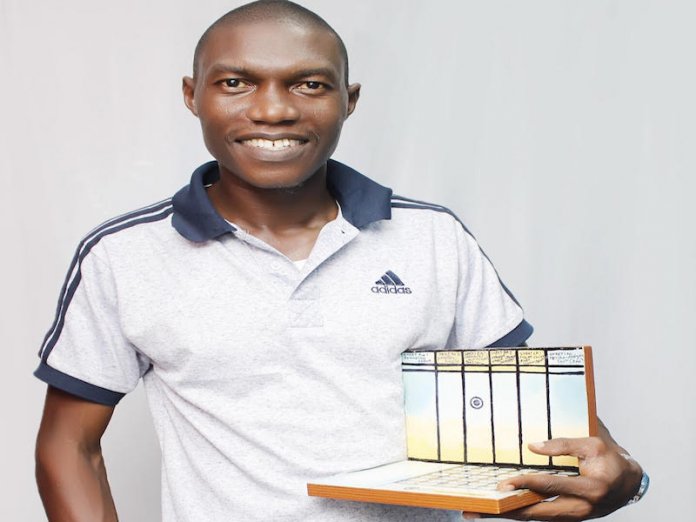 As the federal government continues to grapple with a myriad of challenges facing the education sector, creative scientist, Mr. Peter Matthews-Akukalia, has invented a human mind computer that is capable of putting Nigeria on the pedestal of global reckoning, writes Mary Nnah

Nigerians and by extension Africans have aligned with European scientific discoveries for many years. Africans constantly look up to scientific solutions emanating from the west while unwittingly looking past some of the unique scientific breakthroughs inspired by its ingenious creative scientists.

Nigerian-born creative scientist, Peter Matthews-Akukalia is one of such. Against all odds, he has invented a human mind computer that has changed the course of human history and science. No doubt, his invention will put Nigeria on the pedestal of global reckoning.

Matthews-Akukalia never had a smooth ride in life and his educational career was bumpy as he could not complete his studies in Law at Madonna University. He even tried to study Business Administration, but couldn’t cope due to his poor knowledge in accounting.

In 2001, the Uzo-Uwani Local Government, Nkpologwu, Nsukka, Enugu indigene was admitted to the College of Aviation & Management Studies (Correspondence); however, he was caught between looking after his grandmother in the East and studying in Lagos almost at the same time, hence, was always in transit.

Matthews-Akukalia’s grandmother was his inspiration. According to him, ‘‘while living with my grandmother, it was compulsory for me to read her chapters of the Bible at evenings after our dinner. She told me ancient stories, events, occurrences, mysteries, proverbs, complaints and blessings. She told me about the need to work hard and the woes of wars. She taught me the need to take responsibility and pursue a good and great name rather than chase money for its sake.

“She spoke to me as though it was my personal duty to ensure that the world was made a better place and legacies laid just as the West had done and continued to do. For me, that was the essence of living: to create legacies through solving problems. Above all I have achieved records just as I promised her I would do to make Nigeria and Africa great again and make humanity better by my works’’.

Today, his works are breathtaking and mind boggling. These include the Human Mind Computers that will apply both objective and subjective methods to calculate the inherent faculties of the human mind. It also includes massive technologies such as the Mind Clock Systems, Intelligence, Thought and Emotion Clocks, among others. He is the fulfillment of Nostradamus, the French Prophet and Scientist who predicted that someone from the largest populous black nation in the world would hold the power of the stars in his hands and will lead a monarchy.

Among others, the Nigerian-born creative scientist recently recorded a milestone within the astronomic space by cracking contentious stellar code. Internationally, astronomers and scientists alike have raised serious concerns on the emergence of two stars within the galaxy stud comprising a relatively cool giant and a hot dwarf.

According to this finding, they are 16, 000 light years away from the earth. (A light years is the distance light travels in a year, meaning that everything we see happening in the stars happened 16, 000 years ago).

In his thought-provoking response, Matthews Akukalia stated that ‘‘the planetary code is A=Ø. All stars are operant in the third dimension of the Universe after the Sun and the Moon 3.0øD=1.0øS=2.0øT. This shows that stars are solar particles that exist to create stability in nature through duality 1.0øD=10.0øS=2.0øT. The solar interaction process is physical and splits into bits during the nuclear process resulting to the elements hydrogen and helium -2.0øD=8.0øS=2.0Øt’’.

Explaining further, he said this shows that two key elements are involved in the energy sharing process of the star. First is the solar core and the second is the magnetic pull of the moon which creates the gravitational influence exerted.

‘‘So stars such as the AG Draconis are solar bits of energy balls that share energy under the influence of the planetary and cosmic lunar gravity. This has always occurred but was “seemingly absent. The validation of this code confirms the link between the observed quality of a star in terms of light intensity and the resultant value we get. Stars seen to be very bright have measured over 100 per cent on the Makupedia energy scale and vice versa with occurrence on certain days,” he added.

While American astronomers and researchers have continued to view current cycle as being weird, Peter Akukalia preaches that ‘‘this also shows there is a link between the cosmic energy and dates of birth. Exceptionally brilliant auroræ confirmed on this code are 24-5 October 1870 were both computed to be 100 per cent+; 4-5 February 1872 were both measured to be 50 per cent and 70 per cent+ while those of January 25-26 1938resulted to 100 per cent+ for each. The energy for 12 November 1621 shows 53.3 per cent.

“Remember that Hjorter in 1741 gave the first suggestion of a connection between auroræ and magnetic effects. This discovery is a breakthrough in the knowledge of cosmic energy and planetary operations.”

He further stated that the emergence of two stars in our galaxy stud is prophetic. ‘‘This satisfies Plato’s quest to unravel the link between the cosmos and the human soul. Linking this to the human mind leads to the development of a new field of study known as psychoastronomy in the Makupedia Creative Sciences where I asserted the interplanetary support systems. Please study this phenomenon in my book: Template & Manifesto for the Creative Economy 2: Principles of Psychoeconomix’’.

“If fully embraced and properly executed, the Makupedia device will make Nigeria the envy of other nations of world, including Europe. For instance, this human mind computer is capable of increasing the success rate of students in their areas of human endeavours. “

According to Matthews Akukalia, ‘‘the makupedia is a mind database also known as ‘Mind app’ that allows students to ascertain their true human potentials and capabilities.”

Education experts believe that there is a nexus between ascertaining one’s innate potentials and academic excellence. And this clearly shows why the educational systems in other climes record low rates of drop outs and poor academic performances when compared to Nigeria.

Among other things, armed with the Makupedia app, the Enugu-born inventor can discover the energy link between a student’s date of birth, his/her capacities, abilities, capabilities, talents and the overall destiny. Elaborating on this, he stated that ‘‘the Mind app will begin with a registration process that will record the date of birth and other details. The Makupedia app will process the date of birth first in which the person’s dimension of existence in the universe is measured on scope’’.

Although the human mind app currently exists as a prototype, it has produced tremendous results for people and has been useful in determining a person weak and strong traits; ultimately serving a veritable pathfinder. ‘‘Makupedia app can calculate human intelligence, thoughts, will, emotion and intelligence. It is also a useful educational tool for brain analysis, energy processing and career pathfinder and management’’, Matthew-Akukalia stated.

He affirmed that ‘‘the main approach of the Makupedia code is, DDC>>Discover. Develop. Connect. This makes it outdated to admit a person to study or work without first conducting the Mind Assessment Test – the use of empirical methods never known since the creation of man. This includes the Quantumisation of abstract elements such as education, ideas. I also applied Astrocreative configurations, spiralogy, mind mechanics & engineering, Mindology, makumatics, astrotransmutation, law of pure equivalence, literature technologies and conventional literature technologies.”

The Makupedia app helps student discover their natural abilities early. It also assists in monitoring students to follow a career path which they have comparative advantage in. This will increase productive and efficiency in our academia and fast track a wholesome society for Nigeria as a nation. ‘‘The person’s annual energy cost is billed and charged on the scale of one to ten [1.0-10.0]. Our assets are new energy, new experiences, new interests, new relationships, new civilizations, new humanity, new cultures, new economies, new programs, new technologies, new ideas and new knowledge’’.

In view of Nigeria’s ever increasing population size, it has become imperative for the government to look away from oil and cash in on other untapped human resources. In terms of Massive job creation, Makupedia has the potential to create an estimated 750million jobs in 5 years.

According to Matthews-Akukalia, ‘‘Makupedia can put on the Map where Nigeria moves from being the poverty capital of the world to becoming the prosperity capital of the world. It is a paradigm shift from the old to new order, digital age to the creative age, from Mathematics to Makumatics, from science to the creative science, from psycho-social science to the Creative & Psycho-Social Sciences, from Wikipedia to makupedia, from astronomy to Psychoastronomy, from Medicine to Psychosurgery, from banking to creative banking. We will also move from education to creative education, human resources to mind resources, from violent revolution to mental revolution, from democracy to Creatocracy’’.

He further assured Nigerians that Makupedia has no side effect as “it does not involve blood tests or voodoo or mysticism. It is purely computational mechanics. Mind tests can be applied as apps and even conducted via telephone. There are no side effects at all. It is 100 per cent safe and 1000maks guaranteed”.