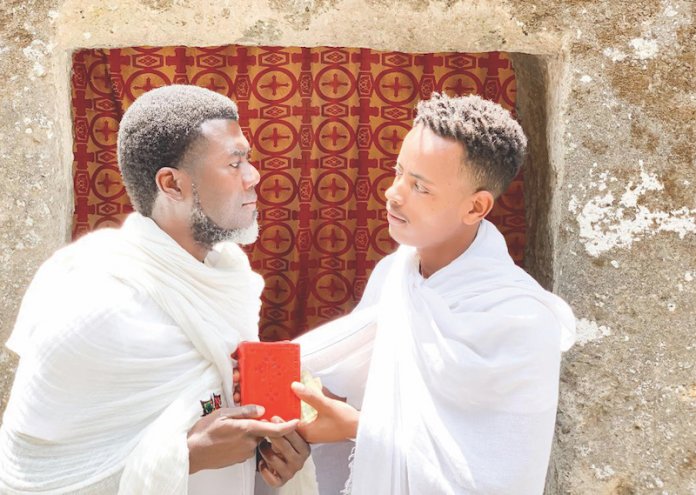 Recently a Nigerian literary critic, accused The Bible of being RACIST, HOMOPHOBIC and a WHITE MAN’s religious gimmick. There is no RACISM in The Bible. As a matter of fact, the God of The Bible punished Aaron and Miriam for being RACIST against Moses’ BLACK wife.

On the issue of HOMOPHOBIA, note that that is a LABEL satan created to SHAME mankind into accepting a SHAMEFUL act. The Bible is against HOMOSEXUALITY and ALL OTHER SINS. The Bible CONDEMNS SIN, not SINNERS. Don’t let satan DECEIVE you, You are NOT your SIN.

On the issue of The Bible being a White Man’s gimmick, note that The Bible originated in AFRICA. The First Nation mentioned in The Bible Is African-Genesis 2:13. Moses was MENTORED by His BLACK father-in-Law (Exodus 18:24). Christianity got to Africa before Europe (Acts 18:22-40).

The Bible you see me with in this picture is an Amharic (Geze) Bible, translated from Hebrew, Aramaic and Greek into Amharic (an African language spoken in Ethiopia), more than 1000 years before The Bible was translated into English in 1526. And I am standing in front of an 800 year old Ethiopian church.

In Philippians 2:13, we read that “it is God who works in you both to will and to do of his good pleasure.” Just as God works through men, satan also works through humans. The literary critic who libelled The Bible is under the influence of his father, satan. Don’t listen to him. My word to this literary critic is this: You are proof that The Bible is the Word of God. The Bible asks us to pray for your likes. If you are bold, say what you said of The Bible about the Quran and see what would become of you. You are a beneficiary of GRACE

Renos Nuggets
RABBITS give birth after 30 days. ELEPHANTS give birth after 2 years.
Those laughing at your present condition are RABBITS who gave birth to SMALL SUCCESSES that will last maybe 1 or 2 years. By the time you deliver the SUCCESS God’s Holy Spirit impregnated you with, it will be MASSIVE and will last for DECADES. Read the story of Colonel Sanders, the founder of KFC. It took him 60 years before he became SUCCESSFUL, but his SUCCESS was an ELEPHANT. I prophesy ELEPHANT SUCCESS for you in Jesus’ name! #FreeLeahSharibu #RenosNuggets
Pix: Reno Omokri at the 800-year-old Adadi Mariam Church in the Oromia Region of Ethiopia, with a Temple Worshiper holding a Geze Amharic Bible that was translated from Hebrew Scriptures 1300 years ago.jpg