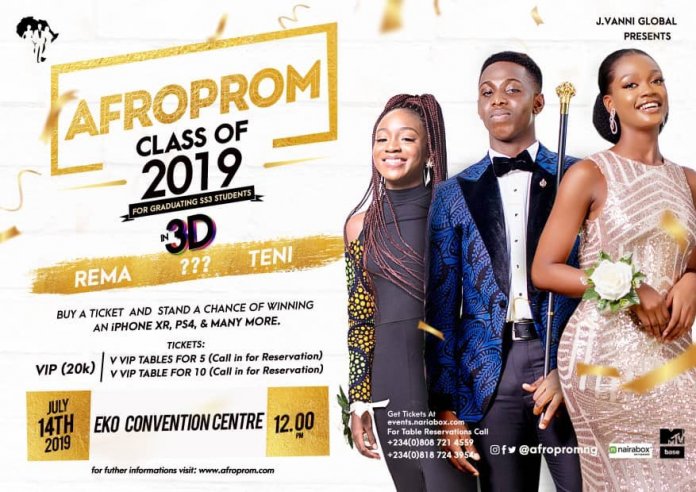 The night was lit up by performances from Teni, Rema, Joeboy and Fireboy, among others. Organised by J. Vanni Global, the event, which had been highly anticipated since it was announced in May, saw thousands of students listing their expectations for the night on social media, as they waited breathlessly for a historic event at one of Nigeria’s most iconic venues.

In addition to music performances from Teni, Fireboy, Rema, Joeboy, Flash on the night, the crowd was also treated to comedy from ace comedian Ushbebe, alongside electric dance renditions by celebrity dance group Dream Catchers, and Don Flex & the Extigate team.

The audience then took in the spectacle of the crowning ceremony for the maiden prom King and Queen, who were each voted in by the audience from a shortlist of three, which was selected from hundreds of entries. Master Ogbole Kenneth, a recent graduate of St Gloria’s college, Ikeja and Miss Okonkwo Angela of Apex Brilliant Academy, Alimosho, emerged winners of the maiden prom King and Queen Crowns, respectively.

In addition to their star prizes, the prom King and Queen will also enjoy an exclusive lunch with a celebrity act next weekend.