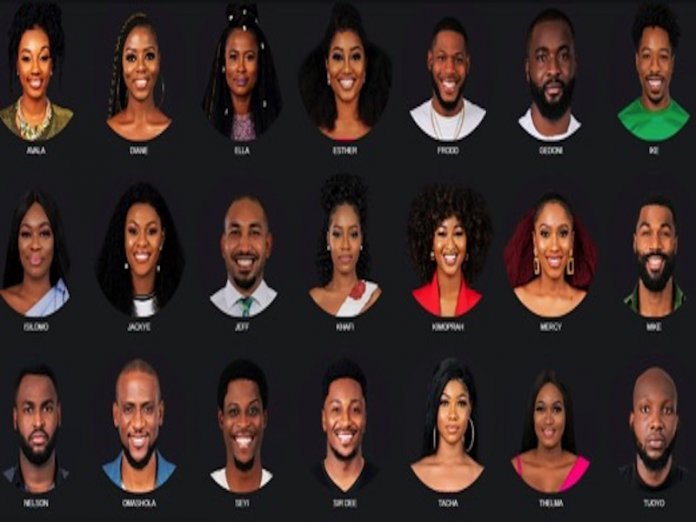 The first week of the Big Brother Naija ‘Pepper Dem’ ended on a note that witnessed the eviction of two female housemates; Isilomo and Avala. This week, the housemates started off with their first live nomination show which resulted in Tacha, Ella, KimOprah, Sir Dee and Mercy nominated for possible eviction tomorrow

The budding romance between Mercy and Ike is getting stronger as they both revealed to each other that they won’t last if one of them leaves the show. They also agreed that Ella was the third wheel trying to put asunder in their union. Mercy and Ike shared a passionate moment in the garden that had viewers angling to get a clearer view.

What started off as a gathering for Mike’s birthday soon ended with housemates breaking into pairs. One notable pair was Mercy and Ike. These two were up in each other’s face that wouldn’t be surprised if they secretly locked lips. The love sprung couple soon migrated to the bedroom where they shared heart to heart discussions bordering on strategy and housemates profiling.

These two look like strong contenders for the other ‘ships’ in the house – Khafi and Gedoni – as they are not slowing down in Peppering viewers with couple’s goals. Ike’s priorities in the house hasn’t been very straight forward and this calls to question his sudden display of affection towards Mercy. Is he stringing her along as a strategy or could the ‘gangsta’ finally be in love? Mercy, on the other hand, isn’t a pushover either. Is she really love sprung or is she playing an elite game of faux romance?

Biggie Has Had Enough

A particular case was that of housemates flouting the language rules in house. Biggie singled out Sir Dee, Jeff, Thelma and Diane for the continuous use of other languages without interpreting. A behaviour Biggie deemed as insensitive to the other Housemates.

The failure of the housemates to adhere to simple instruction earned them more reproach from Biggie. Their shenanigans during the Freeze session didn’t go down well with Biggie. The habit of finding comfortable positions to be in when the Freeze announcement gets made showed the housemates disregard to rules. Not only do they find a comfortable position to undertake the Freeze exercise, but they also continued whispering to each other during the session.

Having lost their Wager due to their poor performance of the play, the housemates have become remorseful. To loosen up their remorse, Biggie decided to give them a task if they must gain back their privileges. But the task comes in three phases, the first of which is the Robot challenge. To complete this challenge, the Pepper Dem gang must use the cardboard boxes earlier supplied. They must use these boxes as props as they turn themselves into robots. At the sound of the buzzer, the housemates must start to walk and talk like robots. The moment the buzzer goes on the second time, they stop immediately.

Now here’s the catch – the successful completion of this challenge will determine whether or not they will go ahead with the other two. Because this task, literally speaking is, lifesaving to the housemates, we can bet they will put in their very best. Or else …

Housemates gathered in the garden to discuss the next line of action after they lost their first Wager last night. The Pepper Dem housemates didn’t Pepper Biggie enough with their play and the implication for this was that their allowance for next week will be affected. It was time for them to be prudent.

Seyi took it upon himself to address the housemates about food wastage in the house. He highlighted the fact that most of the housemates are in the habit of sipping their drinks and discarding the rest of it. According to him, this was something that will definitely work against them in the week to come.

To ensure the housemates adhere to the new rules of rationing, Seyi mentioned that he will be working hand in hand with KimOprah to ensure that fellow housemates apply caution in their excessive eating habits. He also suggested that they come up with a kitchen timetable so it won’t be one person that will be doing the cooking. Other housemates like Nelson, Mike, Tacha and Sir Dee also made comments on the matter. However, it was Sir Dee’s comment that gave the housemates pause as he said: “This is Egypt and Joseph has received the dream”. Hopefully the housemates understood this proverb.