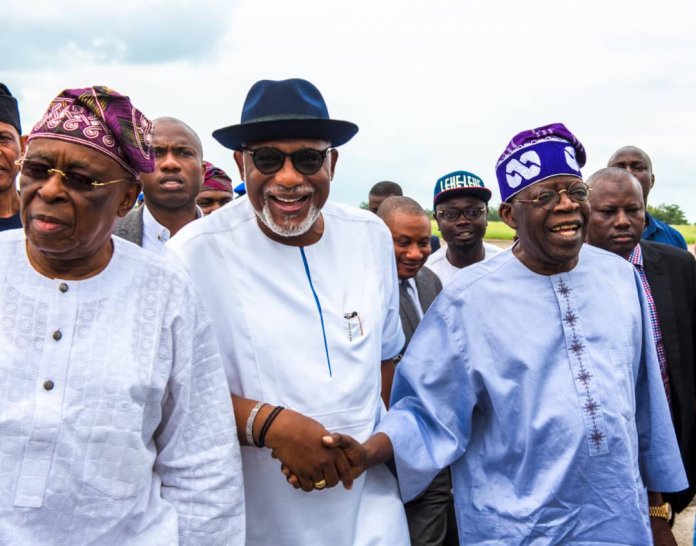 The All Progressives Party (APC) stalwarts in the Southwest led by the party national leader, Asiwaju Bola Ahmed Tinubu, yesterday stormed Akure, the Ondo State capital, where a meeting was convened to resolve the internal crisis rocking the state chapter of the party.

In an interview with journalists at the end of the meeting, the leaders said they have resolved the bickering among leaders and members of the party in Ondo State. Crisis erupted in the APC sequel to the results of the party’s primaries that produced Governor Oluwarotimi Akeredolu.

The crisis further deteriorated and became direct confrontation between Akeredolu and Tinubu and their supporters, which also led to the factionalisation of the party.

Addressing party leaders at the International Event Centre, The Dome, where the meeting took place, Tinubu, who said the political issues were not new in politics, charged leaders and members of the party in the state not to fall the house which they built by themselves.

He said the party leaders must come together as one so as to win the next election and every other future election.

The APC chieftain said: “Charity must begin at home. We want to win the next election in Ondo State as well as every other election, so the solution is in your hands. We want to thank you for your commitment to the party.

Addressing journalists, Tinubu said party leaders have met and had resolved the crisis, adding that “we have directed all parties to mend fences and work together in the interest of the party.”

Speaking also with journalists, Kekemeke confirmed that leaders have spoken to them and they have agreed to sheath their sword and work together in the interest of the party.

He said: “Our leaders have spoken to us and we have agreed to work together, and resolved to find domestic solution to our internal problems.

“In a short while, we will be putting our heads together to work together in the interest of the party.

“We have offended ourselves, and we have however agreed to forgive ourselves in the interest of the party.

“We have also agreed to compromise, and the most important thing is to build a platform and win future elections.”