In an authoritative autobiography that captured major challenges he encountered in journalism and politics, former Ogun State governor, Chief Olusegun Osoba, has lamented that the All Progressives Congress (APC) its founding leaders planned and worked for “is yet to find its political feet.”

Osoba, who chaired the committee that produced the APC Constitution, has equally noted that the dream of the party’s founding fathers “is to influence policies at the centre and start the process of restructuring the federation through devolution of functions and authorities to the states.”

He made the startling revelations in his memoirs, Battlelines: Adventures into Journalism and Politics, slated for public presentation tomorrow, Monday in Eko Hotels and Suites, Victoria Island, Lagos.

Among others, the Vice President, Prof. Yemi Osinbajo and APC National Leader, Asiwaju Bola Tinubu, are expected to unveil Osoba’s autobiography as part of activities lined up to mark his 80th birthday, the coming Monday, July 15.

Since the APC was registered on July 31, 2013, the ruling party is believed to have been indecisive and lukewarm in addressing the demands of most Nigerians especially on the need to restructure the country’s current structure, which gives so much power to the national government at the expense of other federating units.

Amid protracted national debate in 2017, the APC under the chairmanship of Chief John Odigie-Oyegun was compelled to constitute a Committee on Restructuring headed by the Kaduna State Governor, Malam Nasir el-Rufai.
The 23-member committee came up with a comprehensive report with far-reaching recommendations, which included resource control, making local government an affair of states, constitutional amendment to allow merger of states, state police, state court of appeal and independent candidacy, among others.

But since the committee submitted its report on January 25, 2018, both the APC and the Presidency have been silent about implementing it despite demands for restructuring across the board.
Disappointed at the failure to make good some provisions of its constitution, Osoba put paid, in his 341-page autobiography, to controversies on whether the founding leaders of the APC actually agreed to implement restructuring or devolution of powers to the federating units as indicated in the party’s constitution.

The former governor said, “Our dream for the merger included one in which we would be able to influence policies at the centre and start the process of restructuring the federation through devolution of functions and authorities as well as legislation to the state.

“The APC, which its founding leaders planned and worked for, “is yet to find its political feet, because of some avoidable factors. One of this is the inability of the party to implement some of the major provisions of its constitution,” the APC leader said in his memoir.
He said a major missing platform to cushion and link “is the Board of Trustees or Council of Elders caucus. The body would have acted as the voice of reason and stability to the teething problems bedeviling the party.
“The problems are not unexpected and are associated with the process of evolution. However, cohesion of the tendencies is yet to be achieved while political suspicions need containment,” Osoba explained.

He provided historical insight into the formation of the APC, which according to him, started after former President Olusegun Obasanjo allegedly rigged five governors elected on the platform of the Alliance for Democracy (AD) out of office in 2003.
As indicated in the autobiography, the governors, who suffered defeat in the 2003 governorship elections, were Chief Adebayo Adefarati of Ondo State, Chief Bisi Akande of Osun State, Alhaji Lam Adesina of Oyo State, Otunba Niyi Adebayo of Ekiti State and himself.
Consequently, Osoba said the AD governors resolved, “to go back to the drawing board to plan how to regain the progressive control of the South-west. By the end of 2003, the AD had broken into two groups chaired by Chief Bisi Akande and Senator Mojisoluwa Akinfenwa.

“The Akande group was led by the collegiate of the AD governors – Adesina, Tinubu, Adebayo and me. Our group was impressed by the tenacity and dedication displayed by Buhari during the 2003 presidential election and the court case he instituted on the outcome of the elections.

“After a lengthy debate, we thought that we should reach out to the Buhari group to form a national platform patterned along the defunct Social Democratic Party (SDP) that produced the M.K.O. Abiola victory on June 12, 1993.

“We, therefore, decided that a delegation of three of us made up of Adesina, Adebayo and me should open discussion with Buhari. Our team met Buhari and his team in Kaduna after the judgment to discuss the possibility of working together under a progressive national party to face the PDP in future elections.

“To us in our group, the initiative in Kaduna was the foundation of the structure that led to the APC House that was registered nine years after. We made sufficient progress to the point that the Buhari Organisation and our group initiated joint talks during which former Abia State Governor, Dr. Orji Kalu and Vice President Atiku Abubakar, who had fallen out with his boss, became members of the coalition.”

He, therefore, disclosed that it was the coalition that spearheaded the anti-third term agenda with other notable leaders such as Alhaji M.D. Yusuf and Alhaji Gambo Jimeta throwing their weight behind the fight.

He also said formalisation of the coalition led “to the appointment by the elders of the Buhari Organisation, Abubakar, Tinubu and Kalu. As former head of state and sitting vice president then, both Buhari and Atiku were to represent the North in the apex council.
“Tinubu was to represent the South-west and Orji Kalu was to be the face of the South-east. Everything seemed to be going well. We had agreed on a name for the party. We had also adopted the symbol of the ANPP – the corn,” he revealed.

But he lamented that irreconcilable differences set in, when Kalu decided “to form his own party, the Progressive Peoples Alliance (PPA). A painstaking report, which Chief John Oyegun and I had worked upon, was not even read at the ANPP leadership meeting.

“Personal efforts by chieftains of the Buhari Organisation such Sule Hamman, Baba Galadima and Joey Obue on that side and Niyi Adebayo and myself on the other side could not stop the drifting apart of the two groups.
“At the end of it all, Buhari contested the 2007 presidential election again under the ANPP while we were forced to take refuge in the Action Congress as a brand new party.

“Quietly and secretly, Tinubu had tactically registered two new political parties. Working with different, powerful and experienced politicians. They worked day and night to meet all the INEC conditions to register new parties.

“Tinubu’s Bourdillon was the engine-room of the strategy that outfoxed President Olusegun Obasanjo over the registration of these two new political parties. Part of Tinubu’s war cabinet was a very young man in his thirties, Zurmi, who was used as the National Chairman of the secret party that eventually produced the AC.”
He, however, explained that the consequence of the divided house was the emergence of former President Umaru Yar’Adua as the winner of the 2007 presidential election.

Subsequently, the former governor noted that efforts of the progressive forces “to come together after 2007 again ended in failure at the general election in 2011, because we repeated all the previous mistakes.”

By 2012, nevertheless, Osoba disclosed that many factors beckoned on the progressives to reevaluate themselves at the time he claimed the national mood was strongly anti-conservative PDP that had maintained power through alleged fraud.

At that point, he said disaster was the state of affairs in all sectors of the country’s life – economy, security, infrastructure, education, healthcare, agriculture and national values.

He said the challenge “to rescue the country now fell on the shoulders of the progressives. Interpersonal contact was intensified. Discussion at political group level increased. Leaders of the forces at many levels and fronts engaged themselves in intense consultations.

“A positive outcome of these consultations was the formation in the last quarter of 2012 of the Progressive Governors’ Forum by elected governors of the Action Congress of Nigeria (ACN), All Nigeria Peoples Party (ANPP), Congress for Progressive Change (CPC) and a faction of All Progressives Grand Alliance (APGA),” Osoba explained. 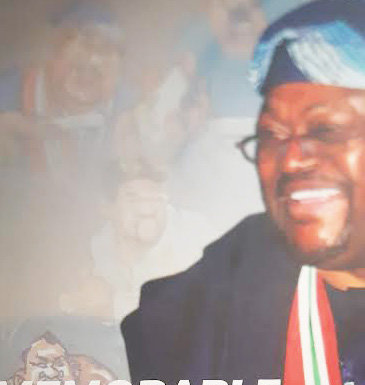