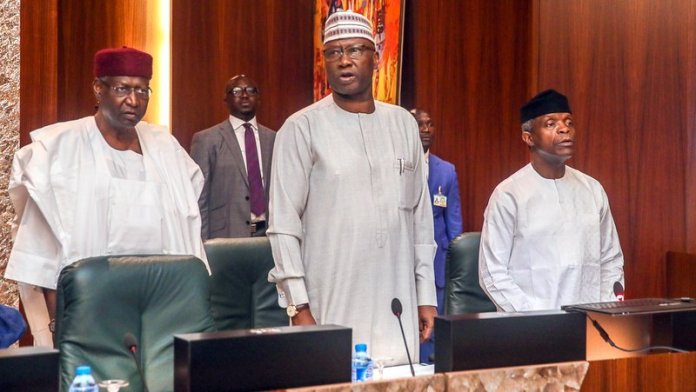 By Omololu Ogunmade and Adedayo Akinwale in Abuja

The anxiety over the delay in the announcement of key appointments by President Muhammadu, was yesterday doused with the reappointment of Abba Kyari as Chief of Staff, and Boss Mustapha as Secretary to the Government of the Federation.

The announcement brought considerable calm and stability to the Presidency in Abuja, with hopes that the much-awaited ministerial list will emerge very soon.
The reappointment of Kyari and Mustapha was disclosed by the Senior Special Adviser to the President on Media and Publicity, Garba Shehu, who added that both appointments were effective from May 29, 2019.
Kyari was first named Chief of Staff at the onset of Buhari’s tenure, while Mustapha joined the President midway as a replacement for the sacked SGF, Babachir Lawal.
On the same day, President Buhari has also announced the appointments of his personal staff.
The appointees, according to Presidential spokesman, Malam Garba Shehu, are Mohammed Sarki Abba as Senior Special Assistant to the President on Household and Social Events; Ya’u Shehu Darazo as Senior Special Assistant to the President on Special Duties and Dr. Suhayb Sanusi Rafindadi as Personal Physician to the President.
Others are Ambassador Lawal A. Kazaure, State Chief of Protocols; Sabiu Yusuf, Special Assistant, Office of the President; Saley Yuguda, Special Assistant, House Keeping and Ahmed Muhammed Mayo, Special Assistant, Finance and Administration.
Also on the list are: Mohammed Hamisu Sani, Special Assistant on Special Duties; Friday Bethel, Personal Assistant on General Duties), Sunday Aghaeze, Personal Assistant (State Photographer) and Bayo Omoboriowo, Personal Assistant (Presidential Photographer)
The statement said the appointments took effect from May 29, 2019.
Meanwhile, the ruling All Progressives Congress (APC) has commended President Buhari over the reappointment of Kyari and Mustapha.
The National Publicity Secretary of the party, Mallam Lanre Issa-Onilu, in a statement yesterday said that these reappointments formally reiterate the determination of Buhari to step up on the Next Level agenda.
The ruling party noted with satisfaction the reaffirmation of the President’s confidence in the duo.
Issa-Onilu said: ‘Having worked with Mallam Kyari and Mr. Mustapha in the last few years, we at the National Working Committee (NWC) of the party strongly believe that the President has made a well-informed decision.
“We are fully satisfied with their contributions so far and acknowledge that the duo fully understand the vision and direction of the APC-led administration.
“Our party is confident that the reappointed Chief of Staff and the SGF would justify the implicit confidence reposed in them by President Buhari and discharge their responsibilities for the overall good of Nigerians and our great country. We extend our congratulations to both Mallam Kyari and Mr. Mustapha.”