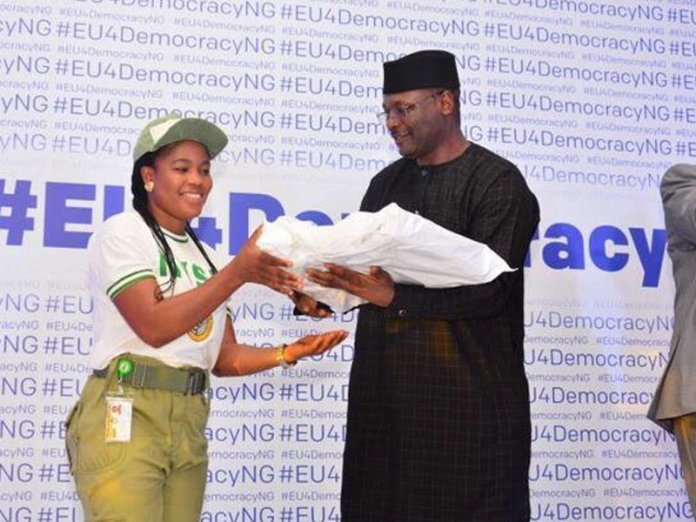 Chiemelie Ezeobi writes that for showing dedication to their jobs during the just concluded elections, the Independent National Electoral Commission recently rewarded some diligent members of the National Youth Service Corps with jobs, just as the European Union doled out IT equipment to 75 of them

During the last elections, some members of the National Youth Service Corps (NYSC) distinguished themselves at the different locations they were deployed to. Months after the election, the Independent National Electoral Commission (INEC) decided to reward them with jobs.

At the event to reward them, Chairman of the Independent National Electoral Commission, Prof. Mahmood Yakubu said that there can be no successful election in Nigeria without the contribution of the NYSC members.

Yakubu made the declaration at a programme held in Abuja on June 17, where the European Union (EU) presented Information Technology (IT) equipment to corps members that worked hard”and showed dedication during the 2019 general elections.

In recognition of the corps members’ laudable contributions to the conduct of elections in the country, Yakubu also disclosed that the commission would offer those who performed well in the 2019 general elections and those who displayed the same traits in the forthcoming Kogi and Bayelsa governorship elections, scheduled for November 16, automatic employment.

The EU, one of INEC’s development partners had identified 75 outstanding corps members who participated in the last general elections and decided to reward them with laptops and phones at the event.

The Head of EU Delegation to Nigeria and ECOWAS, Ambassador Ketil Karlsen, said the gesture was in recognition of the immense contributions made by youth corps members to the success of the general elections.

Karlsen noted that over 290,000 corps members participated in the elections, during which the EU observed their dedication and commitment to the process. He regretted that the EU could not reach out to all participating corps members but explained that the gifts were the equipment used by the EU Election Observation Mission (EU EOM) that observed the recently concluded elections.

The envoy implored the corps members to continue to be good ambassadors of the scheme and their country.

The INEC Chairman, while underscoring the role of the NYSC in successful conduct of elections said: “There can’t be any elections in Nigeria without the NYSC. It is simply impossible. I have said this before, I want to say it again and I will not be tired of saying it, that the youth corps members are the most dedicated, educated, patriotic, willing, able, readily available and the most committed election duty staff in Nigeria.

The INEC Chairman recalled some of the challenging experiences corps members have been exposed to in the course of serving as election day officials.

He said: I recall that in 2015 when we conducted the governorship election in Bayelsa State, when I saw the boat carrying election duty staff and materials to Oproma in Southern Ijaw and to Ekeremo and Brass, and also saw the way the youth corps members were transported, I doff my hat for the NYSC.

“In Ondo, when we conducted the governorship election in 2017, I will never forget the experience for the rest of my life, of youth corps members who were bringing back results from Ilaje and had a boat accident at night. Thankfully, there was the Navy in the background that came to the rescue. We did not lose a single life on that occasion, but on other occasions, we were not so lucky.

Prof. Yakubu explained that in appreciation of the commitment of the corps members to the electoral process, and in order to encourage them to continue to do their best as ad-hoc staff during elections, the commission would identify and offer automatic employment to outstanding corps members on election duty.

He said: “the commission has embarked on a review of the 2019 general elections. There are many of you here, and many that are not in this hall, who did well in these elections. We will identify you and we will reward those who have done excellently well in the elections with automatic employment with INEC.

“By doing so, we hope that those of you who have done very well will form the core of conscientious election duty staff going into the next general elections. We will extend this beyond the general elections to the two major elections we are going to conduct in November – the Kogi and Bayelsa governorship elections. All those who are going to man the polling units will be NYSC members 100 percent and we will eyes open. Those who do very well in the elections will also be rewarded with automatic employment by INEC”.

In his remarks, the Director General of the NYSC, Brigadier General S. Ibrahim, expressed gratitude to the EU-EOM for the kind gesture and expressed the organisation’s commitment to further exploring areas of collaboration with the EU.

He observed that the INEC/NYSC collaboration on election duty has greatly enhanced the scheme’s visibility, just as he pledged the NYSC’s commitment to strengthening the partnership.

The event was witnessed by one of Nigeria’s foremost music icons, Innocent Tuface Idibia (aka Tubaba) and entertainer, Uti Nwachukwu both of whom are also INEC Ambassadors. They urged the corps members to continue to serve with dedication and commitment.