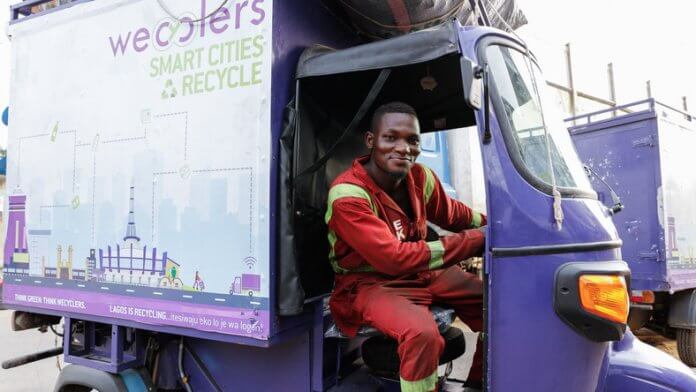 The 2019 winner of the African Development Prize, Wecyclers, a Lagos-based waste management start-up, will be presented with the biennial prize award by the King Baudouin Foundation at a ceremony in the presence of King Philippe and Queen Mathilde of Belgium at the Royal Palace in Brussels.

The ceremony will also be attended by high-ranking guests including Nigerian philanthropist, businessman and Chairman of the United Bank for Africa (UBA), Mr. Tony Elumelu.

According to the Media Executive, King Baudouin Foundation, Esther Oluga,

Wecyclers was recognised for its innovative and inclusive approach to tackling waste management in Nigeria, using technology to empower low-income communities to capture value from their waste.

She said: “Wecyclers are working on turning the waste management challenge into an economic opportunity for communities. Recently, they announced collaboration with Lagos-based environmental organisation ‘African Clean Up Initiative’, which will allow parents to pay for tuition fees through recycling.

“Wecyclers already benefits from the engagement of more than 17,000 subscribers in seven localities in Lagos. They have also created 200 jobs in seven years, with a focus on women, who currently account for 60 per cent of its workforce.”

The foundation said with current growth projections, Wecyclers aims to collect 5,000 tons of recyclables by 2020 and could be serving 500,000 households by 2023.

The prize according to the foundation includes financial support of €200,000 and exposure to a network of international partners, which will allow Wecyclers to upscale their model and increase their footprint, with plans to expand in Lagos, other Nigerian cities and neighbouring countries.

“During the ceremony there will be speeches delivered by Wecyclers CEO, Mr. Olawale Adebiyi, and Founder and MIT alumni, Mrs Bilikiss Adebiyi-Abiola; and a panel discussion that will be led by philanthropist, Tony Elumelu,” Oluga said.