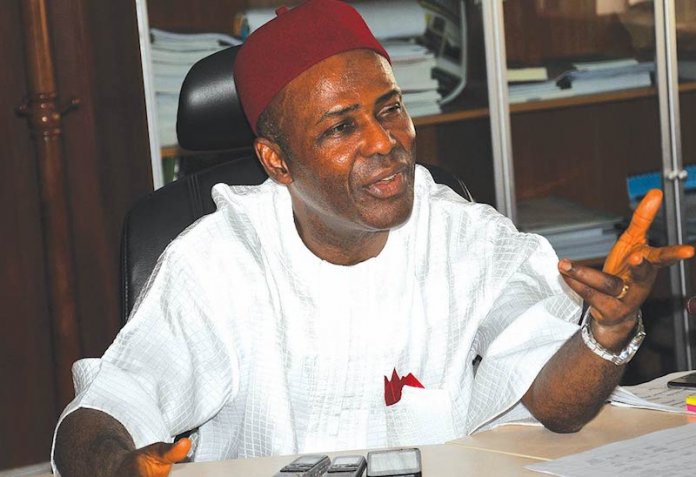 There’s uneasy calm in Ebonyi state as leading personalities in the All Progressives Congress (APC) make deft behind-the-scene moves to secure nomination as representative of the state in the Federal Executive Council. Contenders for this golden slot have intensified their obvious intrigues.

Though, this privilege to constitute his cabinet rests solely on President Muhammadu Buhari, lobbyists never stop trying to exert undue interference, as pressure begins to mount from some quarters throwing up what factors should be considered before pronouncing any ministerial nominee from Ebonyi state.

President Buhari has the next four years to redeem the confidence Nigerians have in him, which appeared to have dropped in his first tenure. He has another chance to avert the unpalatable experience in his first term. One of the surest ways of achieving this is by the quality of members of his cabinet. Nigeria has been at a crossroad ranging from worsening economy to insecurity. Many Nigerians blame the challenges facing the country on the inability of the Federal Executive Council to initiate and implement good policies that would navigate the country out of its present woes.

The President has been advised to look well before coming up with the list of members of his cabinet.

Having been elected on the widely canvassed ‘change’ theme in 2015, Buhari did not quite record resounding success, to the disappointment of the teeming masses who supported him. However, history seems to have beckoned on him again. This time, there is renewed hope that the President will feel the pulse of the people and listen to their yearnings. Most of the ministers have exhausted their ingenuity and should be allowed to go home in peace. Most of them should be excused from active service and be inducted into the privlieged ‘senior citizens club’ where their opinion may be sort as the situation demands.

Already, agitations have started coming from Ebonyi state that the current Minister of Science and Technology, Dr. Ogbonnaya Onu should be allowed to rest, in favour of a more vibrant representative from the state.

Like Onu, a strong caution has also been sent against the choice of the 2019 All Progressives Congress (APC) Ebonyi State governorship candidate, Senator Sonni Ogbuoji for ministerial office. Both Onu and Ogbuoji are believed to be lobbying seriously for nomination.

It was argued that though the President enjoys the prerogative to nominate his ministers or anyone into his team, such a person should be acceptable in his home state.

In Ebonyi state, the state governor enjoys the first contact for possible candidates. The governor is believed to wield some influence on who becomes a minister from Ebonyi. Ordinarily, this applied until 2015 when the Peoples Democratic Party (PDP) lost control of governance at the centre.

That led to the loss of the privilege by the governor to choose who takes the one golden ministerial slot for Ebonyi state.

In Ebonyi, members of the APC were optimistic that Buhari will pay more attention to persons who have been very active in promoting the party as a consideration for inclusion in his cabinet. In the his first term, the ruling party seemed to be peeping from the gallery. When the ministerial breakdown leaked to the public, many lobbyists for ministerial position became jittery.

In Ebonyi, the fear is that Buhari is known to be faithful to his friends, not minding criticism and resistance. In this case, even if the Minister of Science and Technology, Dr. Ogbonnaya Onu has performed abysmally as he was rated from the home front, Buhari may be guided his past relationship with him.

The current thinking is that Ebonyi needs a cosmopolitan politician who will advance the political evolution in the state. This is where they find Onu lacking, because his charity does not appear to begin from home. For one to display true leadership, he must be assessed from his impact in his locale.

The 2019 general election was an eye-opener for the President and his All Progressives Congress. Most of the stakeholders fighting to be in control of the party in Ebonyi state were nowhere to be found. The party became vulnerable and most of it members were ‘devoured’ by the PDP. The party alleged that Onu and Ogbuoji abandoned their mandate to leadership at the crucial time. The duo have recruited splinter groups for the blame game. All these blame games were channeled to exonerate them from the poor performance of APC in the state during the last election, while angling for another chance for inclusion in the President’s team.

Having woefully lost the governorship election and subsequently withdrawn his petition against the winner, Governor David Umahi, the APC guber candidate, Senator Sonni Ogbuoji was accused by party members of high handedness.

A group known as Ebonyi APC Youths Vanguard has insisted that the All Progressives Congress failed in the 2019 general election in Ebonyi state because the governorship candidate of the party, Ogbuoji allegedly created factions in the party and ran the governorship ticket as a personal enterprise always disagreeing with everybody in the party.

The President of the group, Comrade Chuks Obeh recalled that the group had raised an alarm over the suspicious his activities and cautioned the national leadership of APC that Senator Ogbuoji was not only a bad influence but a destructive element that should be removed if the party must survive in the state.

Obeh noted that the Senator’s activities since he won the party’s nomination as the governorship candidate clearly showed that he was not in the race to win but to destroy the party and use the governorship ticket to shop for a ministerial position.

Another group, Ebonyi Consultative Initiative has called on President Muhammadu Buhari not to nominate the Minister of Science and Technology, Dr. Ogbonnaya Onu or the 2019 Ebonyi governorship candidate of the All Progressives Congress, Senator Sonni Ogbuoji as his ministerial choice from Ebonyi state.

In a statement issued in Abakaliki, the National Coordinator of the Group, Chief Michael Chukwu said the duo have not done anything to advance the development of the state.

The group therefore called on President Muhammadu Buhari not to consider the renomination of Onu or appointment of Senator Ogbuoji, if the President actually wants Ebonyi state to be taken to the next level in line with his campaign mantra.

However, the group specifically made strong case for Ebonyi Central zone for ministerial nomination noting that the zone has not benefited from ministerial appointment like their Ebonyi North and South counterparts since the creation of the state.

In their statistics, the group noted that Ebonyi South has produced four Ministers while Ebonyi North and Central produced three and one respectively. The one Minister from Ebonyi central was Ambassador Frank Ogbuewu, who was Minister for Culture and Tourism about two decades ago.

Though the group did not make a submission on any particular nominee, it was reliably gathered that some leaders of the All Progressives Congress from the Central zone, that raked in high votes for the President should be considered.

In the APC top rank in Ebonyi, the preferred ministerial nominee include Senator Julius Ucha, Comrade Chinedu Ogah and Prof. Ben Odoh among others. Ucha and Ogah are said to have delivered the highest votes for President Muhammadu Buhari in Ebonyi state in the 2019 presidential election.

“We deeply regret that for the last four years, our son was appointed the Minister of Science and Technology, his home state has been neglected as if it is not part of the country. Ebonyi state has been schemed out in the calendar of the Minister of Science and Technology, Dr. Ogbonnaya Onu. No federal presence has been recorded since he was appointed to head such a lucrative ministry.”

“If Mr. President so loves Onu, he should appoint for an ambassadorial position where he will be interfacing with the international community. As far as Ebonyi is concerned, we don’t need a dormant and non-vibrant representative or nominee that will enjoy the quota of the state”.

“In the same vein, it should not even be contemplated as we heard that the 2019 governorship candidate of APC, Senator Sonni Ogbuoji has been lobbying to take the ministerial quota from Ebonyi state. It will be a tragedy for Ebonyi state if that happens but we know that President Buhari hopes and thinks well for Ebonyi people. The option of Ogbuoji is no option and Ebonyi people will never accept that.”

“Like Onu, Ogbuoji cannot offer good representation as a minister. For the interest of Ebonyi people, the President should be kind enough to nominate someone who has the passion for Ebonyi people and Nigeria at large. We have many capable hands from Ebonyi state that advanced the fortunes of the All Progressives Congress in the 2019 general election, if the choice must be based on party affiliation. If Ogbuoji could abandon his governorship ambition so soon to eye a ministerial position, it therefore means that he has no political sagacity to be considered worthy for such revered position,” the group concluded.

editor - October 17, 2021 7:32 am
3
SIMON KOLAWOLE! BY SIMON KOLAWOLE On Monday, Vice-President Yemi Osinbajo might have made his boldest pitch yet for his expected presidential bid in 2023. Speaking...