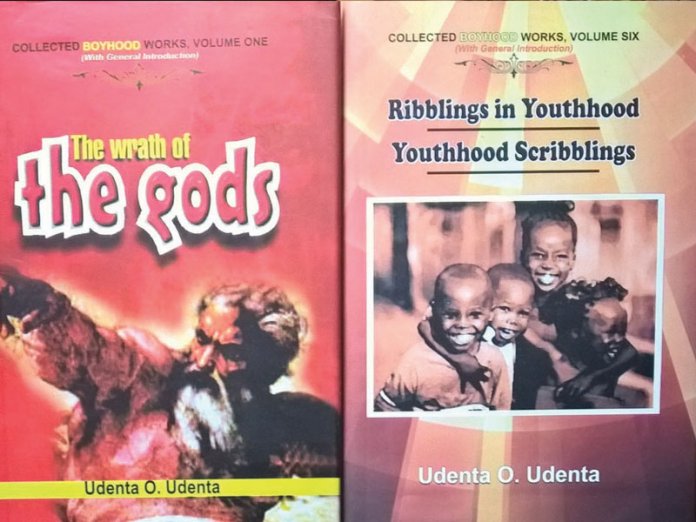 SO LONG A LITERARY ODYSSEY

BOOKS
A child-prodigy, many would have called him. But Udenta O. Udenta would rather explain his childhood years’ forays into creative writing as “magical moments that defy logical reasoning”. No, he was not being modest. He was just being brutally honest. For how indeed could he account for something, which to him “seemed to exist outside of [the] Self, outside the control of my inner impulses; of something you create but cannot explain the meaning and context of your creation”? Hence, in his opinion, these “magical moments” were oblivious indifferent as to whether he was in his boyhood or adulthood.

Back then in 1977, when he was just a form three student in a secondary school, he recalled being weaned on virtually all the novels and short story collections published under the African Writers Series imprint, with Chinua Achebe’s novels top on the list of the four or five books he was to be found reading simultaneously from back then.

“Richer details of the influences that conditioned my boyhood creations are to be found in the general introduction to the collection,” he recently told a literary journalist. “But to evaluate the degree of my coherent absorption and logical rendition of the cultural, especially pre-colonial cultural, universe constructed by Achebe, John Munonye and Elechi Amadi in their novels, as a 13-year-old, will be a task beyond me.”

There was no doubt about the fact that Udenta must have far beyond what was expected of a boy of his age at that time. For he evidenced his marked predilection for the printed word at that age, devouring whatever he could lay his hands on – African and English novels and poetry collections, Greek mythology, philosophical texts and works on political thought and Marxist ideology, even a whole volume of Encyclopaedia Britannica as well as the Nick Carter series, James Hadley Chase novels, novels by Barbara Cartland, stories by Enid Blyton, particularly the Famous Five series, Denise Robbins novels, the Macmillan Pacesetters series, and the whole works of Tuesday Lobsang Rampa.

“However, the overabundance of the interpenetration of cultural density in those works speaks not only to my familiarity with the works of Achebe and [Elechi] Amadi but also my attentiveness to the fabular tales that our mother used to regale us with,” he also told the literary journalist.

Perhaps, these early influences only paved Udenta’s way to becoming a young acolyte of the Muse, which has been known to have whispered its secrets to both the young and the old alike. They could have also helped to awaken the creative potentials slumbering in the impressionable youth. A youth’s sensibilities are after all no less profound than those of the adult even when adults are believed to be more mature artistically and intellectually. For, aren’t the so-called child-prodigies are only celebrated for verbally expressing themselves as intelligibly as adults?

Now, far into his adulthood, Udenta has dredged up his childhood creative efforts and re-published them as a collection.
These Collected Boyhood Works by Udenta O. Udenta consists of six volumes straddling different genres from the novel to drama, poetry to the short story and are: The Wrath of the Gods (novel), Book of Knowledge and Great Understanding, Before They Came (novel), Poetic Reminiscences, The Re-discovery of Alistoga, and Ribblings in Youthhood.

He had written these works between 1977 and 1979 during his pubescent years, when his peers were still grappling with the challenges of adolescence.

The fact that he was able to churn out an average of three books in 12 months hints at a period of intense inspiration and speaks volumes about the author as a person, who could use both hands conveniently. Indeed, it is remarkable that he creative vision did not seem to have been blurred by his youthful experiences.

Somehow, this buttresses the argument that the intellect by virtue of its limitations to earthly transience is not called upon to impart eternal values, which works of art could offer. Because Udenta’s early forays into the realms of creativity suggests a calling, it implies that he carries the abilities to write within him. And these abilities, which only require refined inner sensibilities, are indifferent about his level of education or age. Perhaps, those who would doubt the authenticity and originality of these early efforts are confounded by the stock of vocabulary he effortlessly employed.

In the novel, The Wrath of the Gods, the reader is regaled with a tale of warring neighbouring communities, who ignore a peace deal brokered by the gods. The impudence of these communities soon unleashed a maelstrom of destruction upon them. A tight narrative that echoes Achebe and Amadi, the novel is enriched with magical realism with an evident domestication of Greek Mythology.

Moving on to The Book of Knowledge and Great Understanding. This, as the second volume of the Boyhood series, is part philosophy and part memoir. This work lifts a corner of the veil on a youth’s receptivity to the profundity of the philosophical musings of the time. That early, he was already concerned about politics and statecraft with a fair understanding of Marxian dialectics as the book’s first segment reveals. In the second segment, the reader is offered a shifting kaleidoscope of anecdotes of the author’s secondary school years and ends with a mythical tale delineating the conflict between good and evil with good inevitably emerging the victor.

The novel, Before they Came, as the third volume of the series, recreates how it used to be before the African came in contact with European. The story revolves around an orphan boy, called Ugagwu, who through hard work and perseverance overcomes many daunting obstacles to attain to greater heights. It re-enacts the virtues of communal life and alludes to the balancing interventions of divine justice.

The fourth volume of the series, Poetic Reminiscences, is a collection of poems split into three parts: Poetic Reminiscences; Book of Dislocation; and Lyric and other Traditional Longer Poems. The first, an assortment of 50 poems, are basically about the author’s musings on nature and hints about the influences of European poets. The second, The Book of Dislocation, containing just 10 poems that speak of the psychic, physical and emotional displacement that human beings face due to stress and anxiety caused by unfavourable political and social conditions. Meanwhile, the third and final part, Lyric and Other Traditional Longer Poems revisits themes already expressed in earlier poems.

The Re-discovery of Alistoga…, the fifth volume of the series, has two parts. The first part, obviously inspired by Nick Carter novels of his boyhood years, is about a secret service agent’s search for a priceless publication, The Alistoga. The protagonist somehow manages to overcome the dangers confronting him unscathed. The second part, Retrospective Visions: Cultural Interactions, is a collection of simple and more relaxed short stories with a touch of naturalism and magical realism.

The sixth and final volume of the series, Ribblings in Boyhood, is a delightful mélange of play on the antics of children, witty stories about the Nigerian Civil War, a poetic drama enriched by Greco-Roman mythic lore and short stories anchored in Igbo world-view.
The author’s ability to preserve, and subsequently publish, these boyhood manuscripts deserves commendation. The reader is through them offered glimpses of how the grounds of his activism years were prepared.