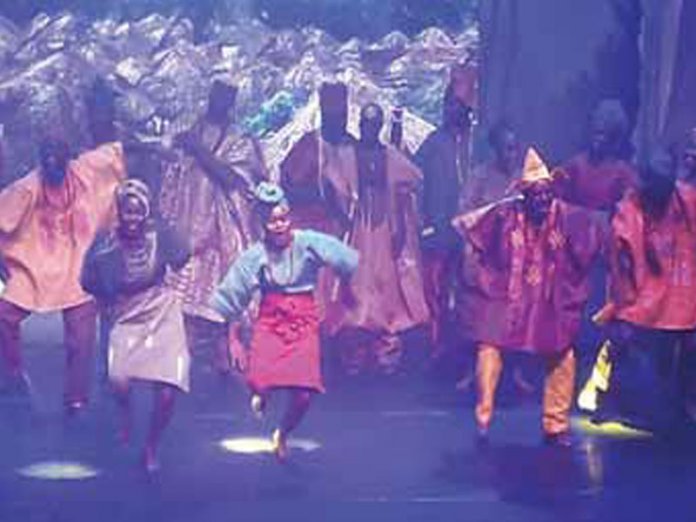 Grandma Wura! That name rings a bell with many children in private schools today because it is a theatre character, the alter ego of Bola Edwards who has made story theatre tradition popular in contemporary times.

Rooted in folkloric tradition, story theatre was one of the gifts for Children’s Day celebration in Lagos. An initiative of the Proud African Roots Limited, the show, “Adio (Omo Iya Alakara) the musical’’ was created to entertain and develop the next generation of leaders who are selfless nation-builders.

Directed by Patrick Edwards, Adio the musical is based on the story of young boy whose mother dies during the war and is rescued by a woman known as Iya Alakara (seller of beans cakes). He grew up in her home and is sent to school. Adio is a happy-child, playful, inquisitive and impulsive. He is jovial and made friends with almost everyone including an old man called “The Strange One’’.

His best friend is Korede, a visually challenged boy whose mother abandoned as a little child. He has since been fending for himself. That hard life taught him wisdom early in life and he is one of the most sought after by the villagers because of his incredible insight into difficult situations.

Adio spends time with Korede after school. One day, he tells Korede of his plans to sneak after the strange one in order to know where he lives and find out if he has people who care for him. Inspite of Korede’s reservations, Adio insists on following the Strange one to the forest. Korede decides to accompany Adio in order to protect him from the forest spirits and frogs.

Upon their return home after several days away from home, the village heads with powers vested in the Olodumare (Patrick Diabuah) appoint Adio as the new king. Adio cuts his people’s victory dance short with his declaration.

He wants Korede to be crowned the king himself. The villagers are visibly angry and rejects Korede, on the premise of his visual impairment. After much persuasion, Adio convinces the villagers of Korede’scapability to lead the people aright.

As expected of the story theatre, the use of colourful costumes, puppetry and props gave life to the drama which is built on the theme of inclusiveness. The adventure part of the tale rests in the frog scene where Adio and Korede were encircled by the frogs.

Two of the cast, David Ahmed and Michael Bankole who played the role of Korede are multi-talented students of the Pacelli School for the Blind and Partially Sighted Children. The school is a non-fee-paying institution under the proprietorship of Archbishop of the Catholic Archdiocese of Lagos.

To put a wrap on the show, a photo session was declared for children who wished to be captured with the singing tree and Grandma Wura, the narrator for the musical, Adio.