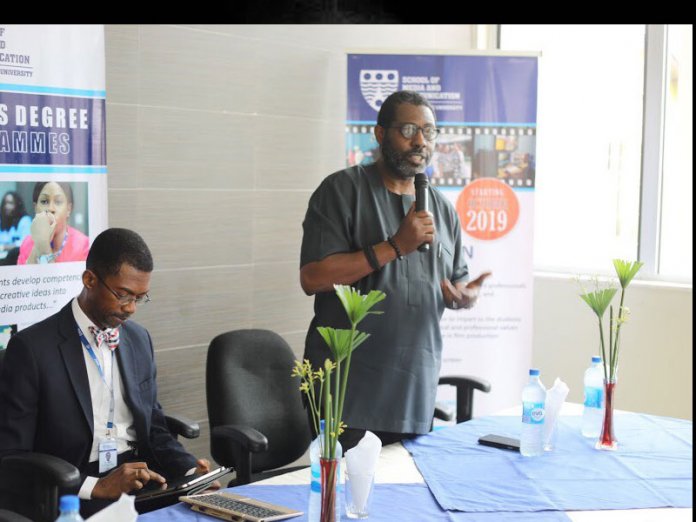 With the aim of inculcating in students the requisite knowledge and skills required for a successful career either in film making or as an academic specialising in film, PAN Atlantic University recently made history by being the first university in Nigeria to offer a Masters programme in film making. Ogechukwu Obi and Sunday Ehigiator report

The Nigerian Film Industry (Nollywood) is globally recognised as the second largest film producer in the world. It is one of the priority sectors identified in the Economic Recovery and Growth plan of the Federal Government of Nigeria with a planned $1billion in export revenue by 2020. The Industry is a significant part of the Arts, Entertainment and Recreation Sector which contributed 2.3 per cent (NGN239biliion) to Nigeria’s Gross Domestic Product (GDP) in 2016.

Nonetheless, existing challenges would have to be addressed to take Nollywood to the next phase. And this is what PAN Atlantic University (PAU) is set to achieve with its newly-launched Masters Degree Programme in film making – first of its kind in Nigeria. As film making in Nigeria cannot attain its next height, except by consciously grooming and exposing filmmakers to world-class creatives, training, and facilities needed for it to blossom.

Addressing journalists, the Dean, School of Media and Communications, PAN Atlantic University, Dr. Ikechukwu Obiaya, said the program will be a combination of the academic and professional deliveries that will animate the intersection of theory and practice in the philosophical, entrepreneurial, technological and aesthetic dimensions of film making.

According to him, it is no news to anyone that the Nigerian creative industries have made great strides and have become an industry that stands out in a particular way. A recent article in the Harvard Business Review points to Nollywood as a market-leading innovation, and profiles it as one of three innovations that have helped create entirely new (frontier) markets. According to the authors of the article, Nollywood is among scores of entities that have realised enormous growth by creating entirely new markets in the least expected places. They called it ‘the power of market-creating innovation’.

Obiaya said, “The Nigerian film industry is a striking phenomenon in the way its practitioners have braced up to the existing challenges and built an empire out of nothing. They have found solutions to challenges of funding and distribution, thereby creating a model that is now being emulated in so many other countries. What the practitioners have achieved is a notable case study for scholars given the contribution to knowledge in the area of routes to market, product development and market entry.”

“Of particular note here are the various training programmes and the establishment of the Nollywood Studies Centre, a resource and archival centre that has in its holdings over 10,000 Nollywood films from the early days to the newer works. We are also the educational partners of Multichoice in the recently established Multichoice Talent Factory Academy. All of this goes to manifest our confidence in this industry and its tremendous potential. And we believe that it deserves all the support it can get towards furthering its development.

“A key part of this required development is training. There still remains a gap in this area because the available outlets for training do not match the great number of persons wanting to enter this industry. This forms part of the reasons the PAU introduced the MSc in Film Production and will be the first to offer this level of certification in film studies in Nigeria.

Speaking further, Obiaya said the programme will cover four key knowledge areas – Scripting and Directing for the screen; Cinematography; Editing for the Screen and Sound Design for the Screen, adding that the course offers specialisation options in seven major film production areas of short film; documentary; interview and feature film. Others are serial drama, commercial filmlet and the music video.

He said, “The MSc Film Production seeks to inculcate in the students the knowledge and skills required for a successful career either in film making or as an academic specialising in film. It will work to animate the intersection of theory and practice in the philosophical, entrepreneurial, technological and the aesthetic dimensions of cinema. It is a combination theory and practice course that will produce industry-ready graduates.

“It will likewise help prepare students for the new Nollywood of global standards, amidst being the link between professionalism and integrity, as based on our traditional focus on ethics in Pan AtlanticUniversity.

“The many professional associations in film and associated industries will be glad to have a programme that blends theory and practice. We will continually partner with you all to ensure the courses remain best-in-class and relevant to your needs. Persons aspiring to enter the industry will be glad to know that world-class training in this field is now available in Nigeria.

“There are many and growing opportunities in this sector. The Digital Switch Over (DSO) in broadcasting in Nigeria is going to lead to increased demand for content. This means that more trained persons will be required to work in content creation, production and marketing. The skills and capabilities that the MFP will teach will contribute towards meeting this need.”

Speaking on the institution’s readiness in terms of human and materials resources, the Dean said, “We have put together a world-class curriculum and a first-rate faculty to commence teaching this course. Prospective students can bank on the knowledge that they would be studying at a School renowned for graduate study of communication. The facilities include studios for audio-visual, sound and engineering; four editing suites; fifty units of Apple as well as 50 units of Windows workstations graphics and animation suite.”

“The duration of the programme is five semesters in full-time mode, and seven semesters in part-time mode. Although, we have special considerations for those who already had one or two involvement with film making; be it as a filmmaker, actor or actress, journalist or as a first degree holder in media-related causes, or theatre arts. Depending on those premises they may be starting the program from the third semester.

“This duration, in either case, shall be inclusive of Internship and Industrial Attachment. Enrolment has commenced for this course, and I hope that the market and prospective participants will greet our offering with as much excitement as we have found in it together,” he noted.

Speaking also, the West Africa Director, DSTV Talent Factory Academy, Mr. Femi Odugbemi underscored the uniqueness of the programme, stating that there are resources available to immerse students in the hands-on training and experience of content.

He said, “I am really delighted to come here today to underscore something that I think the industry needs to take very seriously, the fact that no matter how prosperous the town is, the gown has to come in and articulate why we do what we do. I think Nollywood has found a way to tell the African story. We now need to teach the system that articulates what motivation is, also make the filmmaker to understand his own responsibility as a voice for what we call ‘the African experience’. It is very important that our filmmakers are very knowledgeable about the sale, they also need to have knowledgeable sociology, in politics, in governance and are able to use the power of cinema to drive development and I hope that is what this Masters programme will be able to do.”

A renowned film producer and a key character in the film that flung the door of film production open in Nigeria (Living in Bondage), Mr. Okechukwu Ogunjiofor aka Paulo described the introduction of the MSc in Film making by the PAU as an epoch event. He said this is the first time in the history of Nigerian universities, “we are going to be having a university that dedicates a Masters degree to those who make films.

“When we began filmmaking sometime back in 1992, most of us were not trained and those who were trained were trained in things like Theatre Arts and some in Mass Communication, and a few that read film didn’t read up to degree levels. And the schools that were giving out such training were very few. It was almost like a trial-and-error thing but it was driven principally by passion. And so, within that space of time – about 27 years now, the industry has traversed about three epochs and is entering into the final frontier which is the fourth epoch”.