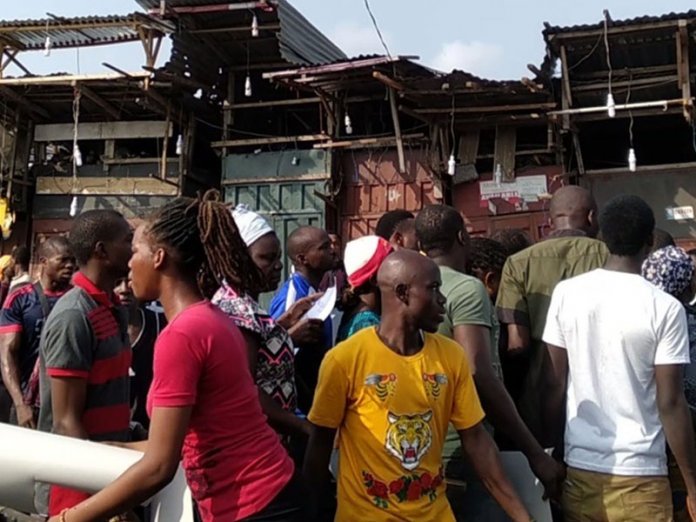 Some traders affected by the ongoing demolition of Agboju Market in Festac Town, Lagos have blamed market leaders for “insincerity” over the exercise.

The News Agency of Nigeria (NAN) reported that bulldozers moved in on Friday and began pulling down the structures in the market just as the traders started displaying their goods for sale.

Some of the affected traders told NAN that the issue of the demolition had been ongoing between the state government and the traders.

They, however, expressed shock over the exercise which occurred before the seven-day quit notice issued them expired.

Mr Uzo Thomas, a trader, said they assumed the demolition would be done on Monday after the notice elapsed on Sunday.

“To our surprise, Friday morning, we were displaying our goods, we just started hearing, ‘pack, pack,’ we thought it was a joke.

“Before we knew it, bulldozers started bringing everything down,” he said.

Also, Mrs Anulika Chukwu, a trader, said last Thursday, officials of Amuwo Odofin Local Government came to warn the traders not to sell on the walk ways, which they complied with.

“If we had known beforehand, I wouldn’t have spent the money I had yesterday buying goods for sale,” she lamented.

However, some other traders said that the land where the market was situated was a buffer zone, with pipelines running underneath and electric cables overhead.

Mr Olawale Ashakaba, a trader, said: “This is a federal government property, there are pipelines running under here.

“I believe there’s something our leaders are not telling us,” he said.

“The leaders haven’t even called a meeting to tell traders what is going on.

“If indeed there’s going to be a new market, how long will it take to be completed; how many months or years?”

The Iyaloja General of Amuwo Market, Mrs Osinatu Adebayo, refuted the allegations, saying there was no foul play.

“The problem is that the market is too rough and the state government called us to say they want to rebuild it to a modern market.

“They would have finished building it but we’ve been delaying and begging for more time, ‘please allow us to sell for Christmas’ or ‘please let us sell for Easter’.”

According to her, buying and selling will continue as usual, once the site has been cleared.

Adebayo pledged her commitment to the traders in ensuring that they all get shops when the new market is completed.

“My children are also traders here, so I can’t allow things get spoiled.

“Before outsiders get shops, all the traders will be considered first,” she said.

Another official, who spoke under anonymity, said he wasn’t sure how long it would take to complete the project.

He, however, urged the traders not to kick against modernisation of the market.

All efforts by NAN to reach Amuwo Odofin Local Government Chairman, Mr Valentine Buraimoh, proved abortive as his aide who picked his calls said he was attending a state function. (NAN)