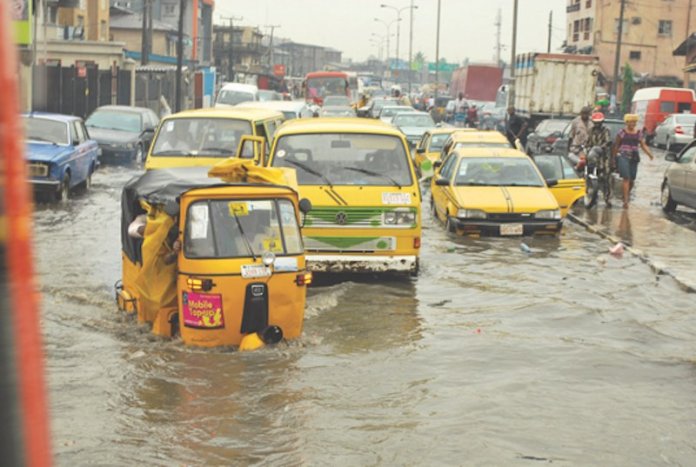 In Lagos, a few days back, the heavens opened and it rained profusely. If the enormity of the recent rainfall is anything to go by, Lagos residents must gear up for more of such fierce moments in the coming days.

Indeed, experts have predicted that the intensity of this year’s rains will be more than what we had in the past. For instance, the Nigerian Meteorological Agency (NiMet) had earlier predicted “extended rains for areas in and around Adamawa, Ogun, Edo, Niger Delta and low-lying areas such as Lagos.

As Lagosians await the rains, certain issues need to be put into proper perspective. First is the topography of Lagos. A critical feature of Lagos topography is that the state is essentially made up of low lying terrain up to 0.4 per cent below the sea level. Naturally, this arrangement is the source of huge drainage challenges that confront the state. If this is added to the volume of rain that is being experienced in the state lately, it would be realized that there is possibly no way there would not be flash flooding in Lagos.

Second, certain negative practices such as indiscriminate dumping of refuse and blockade of drainages easily aid flooding. This is often rampant in markets and other commercial centres as well as densely populated areas in the state. Often, the effects of such poor sanitary habit on affected residents are unquantifiable and devastating. Some have been rendered homeless and miserable, no thanks to human induced environmental hazards. Thus, we all need to fully embrace the culture of proper waste disposal, comply with building regulations, tap into alternative energy use, and pay necessary attention to sanitation issues among others.

Lagosians must be ready to cooperate with the state government by embracing positive attitude in their response to the environment. These include proper waste disposal, compliance with building regulations, embracing alternative energy use, paying necessary attention to sanitation issues, not building structures on drainage channels, flood plains and on water pathways.

As always, the state government is committed to a cleaner environment and quality public health through implementation of community based solid waste management, flood control, vegetal control and high standard of home and personal hygiene, sanitation, control of environment pollution (air, water and noise), beautification and advertisement control. Consequently, its approach to tackling the issue of flooding in the state is multi-faceted and multi-dimensional. It includes dredging, massive construction and expansion of drainage channels, desilting and excavation of silts to dumpsites, regular repair, clearing and cleaning of drainages, canals and collector drains across the state.

Whenever it is observed that the intensity of the rains is high, it is advisable that people vacate flood-prone areas. Equally, it is also important for the citizenry, especially children to stay indoors in order to reduce movement to the barest minimum. In fact, if it could be avoided, it is better not to drive while it is raining heavily. Similarly, we need to maintain strict personal and environmental hygiene at all times to avoid being victims of water-borne diseases. Also, to mitigate the effects of cold, we must ensure that children and the elderly are properly clothed with warm clothing during the rains. It is only when this is done that we will be able to curb the spread of rain- induced health hazard such as cough, cold and other related ones. Additionally, this is the time to embrace the culture of taking plenty of thoroughly washed fruits in order to boost the immune system. This is in addition to drinking water from only trusted and well- tested safe sources.

Since we now live in a hi-tech information age, it is also imperative that people listen to news reports and information on weather situation from various available credible media. This will really aid in planning movements and avoiding flood-prone locations. Also, in view of likely destructive thunder strikes that usually accompany windy rainfall, Lagos residents are strongly advised to always disconnect all electrical appliances whenever they want to sleep or go out. This will go a long way in checkmating rain-induced electrical debacles. Similarly, children should be discouraged from touching electrical equipment when wet.

In as much as it is beyond human powers to stop rains, we should, at least, do things that are in our powers to lessen their negative consequences. This includes regular clearing of gutters and drainages in our areas, making use of suitable services to dispose waste, reporting anyone dumping refuse in drains, gutters and canals to appropriate authorities, moving immediately to higher ground when flooding is imminent wherever we are, staying away from submerged electricity cables, cleaning and disinfecting everything that gets wet, staying away from canals and drainages evacuating or leaving danger zones immediately, calling 767 in case of emergency among others.
––Tayo Ogunbiyi, Ministry of Information and Strategy, Alausa, Ikeja.