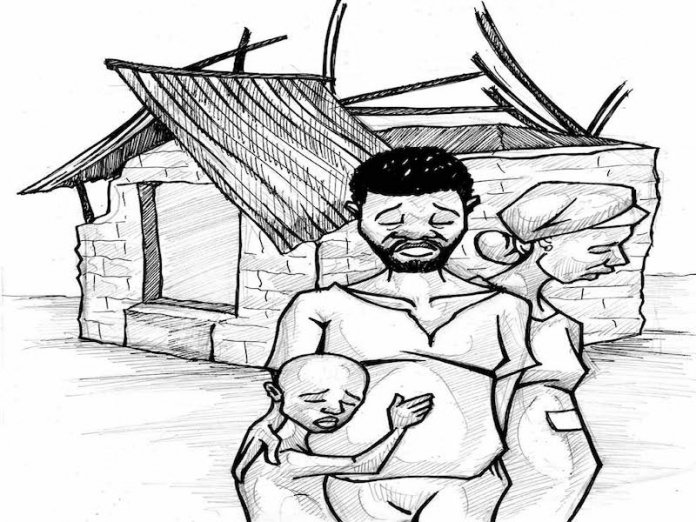 The challenges of the internally displaced persons should be addressed

The humanitarian situation in the internally displaced persons’ (IDPs) camps across the country begs for urgent and prompt intervention from government. With thousands of people reportedly sleeping outside in the open and while others are in extremely overcrowded places, the conditions of the IDPs are dire, harsh and increasingly becoming critical. The number of the IDPs is also on the rise. It is estimated that 1.8 million people, of which women and children, constitute 87 per cent are affected by the continued widespread insecurity and hostilities in the country. Though we acknowledge the limitations of government, given lean resources, we must find ways to ameliorate the problems of the most vulnerable in our society.

Apart from massive food shortages, the victims are imperilled by several risk factors. Dislodgement of populations and resettlement in make shift locations create atmosphere of overcrowding, economic and environmental degradation, poverty, lack of safe water, poor sanitation and waste management, all of which promote communicable diseases and make life unbearable for the displaced citizens. There are also reports of the startling abuses to which women and girls are subjected in the camps. It is unacceptable and criminal for security personnel and aid workers, whose primary task is to guard and provide support for the displaced persons, to turn around and be demanding sexual gratifications from women and girls in exchange for food, money and other favours.

Some of the people in the IDP camps also suffer from post-traumatic stress disorders and increased rate of infectious diseases. Many children born in these camps do not have access to education, placing their future at a risk. We appeal to all critical stakeholders to help in tackling the diminishing quality of life in the IDP camps where the rate of mortality and malnutrition is unacceptable. Government, donor agencies and NGOs should also address the cases of low rate of vaccination in the camps amid allegation of shortfall in intervention by corresponding agencies.

Hunger is rife in the camps, medicare is in short supply even as shelter, clothing and water are essential commodities. The dire situation of the displaced persons is amply captured in a recent report by the United Nations Office for the Coordination of Humanitarian Affairs, which stated that “The vulnerable host populations are in critical need of humanitarian interventions that include food, water, sanitation, protection, education, shelter and health services.” The question, therefore, is: Why, in spite of the “huge and enormous” cost to the federal government, Nigeria, according to the UN agency, is facing “the biggest humanitarian crisis in Africa today”?

The challenges are probably the ineffectiveness of the several agencies of government saddled with the responsibility of soothing the pains of the IDPs, and massive corruption. After all, it is known that relief materials meant for the IDPs have been diverted to the open markets for sale to the general public by officials of government. Also notorious is the fact of misappropriation of funds meant for the relief of the displaced persons. The high level of corruption has exacerbated the poverty of majority of the people. By diverting scarce resources meant for the most vulnerable of our people, life is being made increasingly difficult for them. This challenge must be addressed.

While the case involving the former Secretary to Government of the Federation (SGF), Mr Babachir Lawal, remains pending, the federal government needs to ensure that resources being deployed to help the poor and vulnerable of our society are not being misappropriated by a few persons in positions of authority. The authorities must also work to restore lasting security to the communities from where people in the IDP camps ran so that they can return to pick up the bits and pieces of their lives.