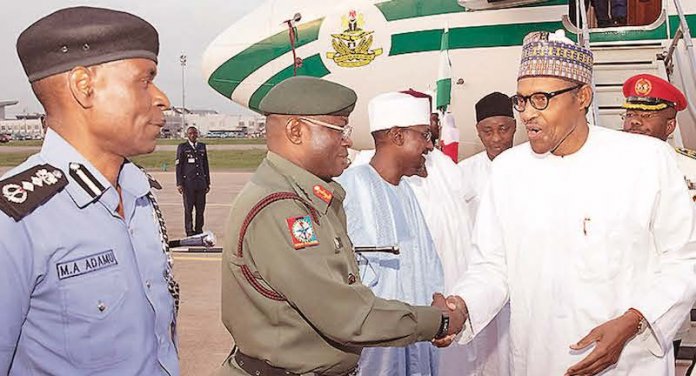 The President’s Chief of Staff, Malam Abba Kyari; Minister of the Federal Capital Territory (FCT), Malam Muhammed Bello; acting Inspector-General of Police, Muhammed Adamu and other government functionaries were at the airport to welcome the president.

While in Makkah, President Buhari, who performed the lesser hajj alongside his wife, closed associates and aides, also held Iftar dinner meetings with prominent Nigerians, including his key ally and National Leader of the ruling All Progressives Congress (APC), Bola Tinubu.

Others who met with the president included Governor Abdul’aziz Yari of Zamfara State, who was accompanied by Emir of Maradun, Alhaji Garba Tambari.

The holy month of Ramadan is a blessed time for spiritual reflection and commitment, while prayers are encouraged to achieve forgiveness, peace and prosperity of Nations.

President Buhari is expected to preside over the valedictory session of the Federal Executive Council (FEC) today, barely a week before his inauguration for another four-year tenure as President and Commander-In-Chief of Nigeria Armed Forces.

The Secretary General, Africa-France Summit, Stephanie Rivoal, said this when she visited the Minister of Foreign Affairs, Mr. Geoffrey Onyeama, yesterday in Abuja.

She said that the summit with the theme “Sustainable Cities” was aimed at helping African countries resolve the rural-urban drift among other challenges bedeviling the continent.

According to her, Nigeria is expected to showcase its projects that have been proven to work at the two-day summit for all stakeholders involved in development of cities.

She said it was the wish of Macron for Nigeria president to be in attendance at the summit because of the importance the country in the continent.

Rivoal also said that the summit, unlike every other summit was expected to provide concrete solutions to the challenges facing cities in Africa.

“I will appreciate it if President Buhari will come with a delegation of people involved in city development.”

She stressed that the summit wanted to provide a forum in which “ministers share ideas with one another on concrete solutions to development of cities.”

“Stakeholders will be there to look at what is the best for the people that live in those cities.

“Besides, there will be concrete commitments by stakeholders and this will be followed up at the end of the summit,” she said.

According to her, issues like how to ensure access to health, water, power and the rest will be discussed and also ways to make the rural areas more attractive to the people so as to curb rural-urban drift.

This she said explained why the summit would be hosted in Bordeaux instead of the big city, Paris.

The grand finale will be a football match between the World Champions, France, and the winners of the 2019 African Cup of Nations taking place in Egypt in June.

Onyeama in his remarks appreciated the invitation and said that Nigeria would love to be part of the summit.

The minister said it was very important for Africa to manage growth and make the continent lively adding that it was something every society really had to address as cities were becoming a challenge.

According to him, President Buhari is looking at economic trajectory where rural-urban drift can be curbed.

“The challenges in improving quality of lives; to slow down and reverse the trend of urban-rural drift is something we are looking at and we hope to attain.

“Building up the economy of rural cities is an excellent idea. We have to look at how to make rural cities friendly for the people.

“I am sure that Mr President will keep the date as it is something he will consider,” the minister said.