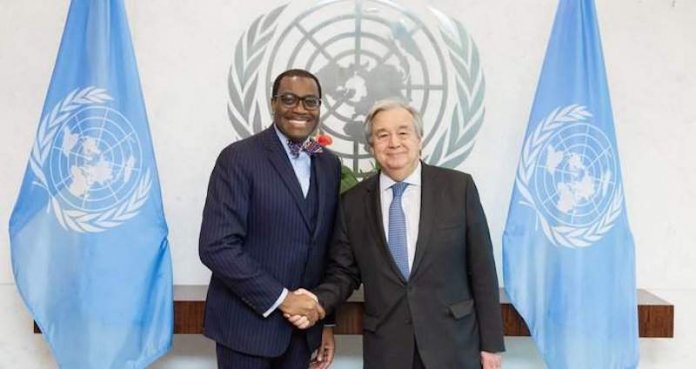 Development impact on the continent and security in the Sahel were among the top issues discussed in a recent meeting between United Nations Secretary General António Guterres and African Development Bank President Akinwumi Adesina in New York.

A statement by the AfDB said both leaders agreed that current efforts must succeed in Africa, or risk failing globally, and emphasized the need for deeper collaboration between their institutions to achieve the Sustainable Development Goals.

Guterres signaled his strong support for the African Development Bank’s flagship ‘Desert to Power’ initiative, which is expected to provide electricity to 250 million people. He also offered to convene a special global meeting on Lake Chad, in consultation with Nigeria’s President Muhammadu Buhari.

The “Desert to Power” program, a $10 billion initiative to build a 10 GW solar zone across the Sahel—the largest in the world, aims to develop and provide 10 GW of solar energy by 2025 and supply 250 million people with green electricity including in some of the world’s poorest countries.

According to Adesina, “Secretary General Guterres and I had a highly productive engagement and committed to enhance strategic and operational partnerships between the UN and the African Development Bank. I am encouraged by the Secretary General’s generous support for the Bank’s development initiatives, which we are certain will bear fruit across the continent.”

Adesina also briefed the Secretary General about ongoing discussions on the Bank’s General Capital Increase (GCI-7), designed to address Africa’s growing lending demands. The Secretary General committed to advocate “for the mobilization of adequate resources in order to further the Bank’s development goals.”

Guterres and Adesina also discussed the Bank’s inaugural Africa Investment Forum, held last year in Johannesburg, South Africa, where projects worth US$38.7 billion secured investment interest. The Secretary General accepted the Adesina’s invitation to participate in the 2019 edition of the event, to be held in November in South Africa.