As said in Isaiah 3: 10, “Tell the righteous, it will be well with them, for they will enjoy the fruits of their deeds”.

On April 23, 2017, the eagle flew home in a blaze of glory and the world, literarily stood still. Two years after his glorious transition, Senator Isiaka Adetunji Adeleke’s spirit continues to enjoy peace of the Almighty God, the unfailing and unalloyed loyalty of his well-wishers. His dreams and aspiration of selfless service to humanity remain undying, but rather blossomed, as people of goodwill, who believe in his dignified personality and political acumen, are holding the front contended and the flag flying high. Asia Isiaka Adeleke, lele lo nfe.

There is no second of dull moment for his sweet memory. Each passing day keeps him evergreen in the minds of his teaming admirers across the world. Why not, if not? He worked for such feat, while he was with us. Senator Isiaka Adeleke well-wishers are daily trying to outdo themselves to make his everlasting legacies endure and sweet memory to linger on. They are yet to come to terms with the reality of his transition. But the first executive governor of Osun State is resting peacefully in the bosom of Allah, his creator.

The Central Mosque built in his honour by his esteem family, is now blessed with worshippers from the nooks and crannies of Edeland. The craving every Friday Jumat Service, is for Muslim adherents to secure a place in the magnificent mosque, just to give God the honour and a feeling of having him among them. This is one enduring legacy, that was put in place by his family and which will outlive everyone of us still around before we join him. During his lifetime, he did not surround himself with pessimistic people or those who distrust God’s promises. He did not, when there were times of crises, which were very few and there was cause for worry and anxiety, yield to the hearing of fear. In such times, Senator Isiaka Adeleke desperately turned to God in prayers, standing on the irrevocable promises of God that He will never abandon His own. The late Asiwaju of Edeland believed in the mighty power, that changes every situation for the best. And he in turn gave the best services to humanity. Isiaka Adeleke was one of the limited edition of human beings, with solid reputation and character and without any scandal.

In the last two years of his glorious transition, many people are still testifying to his good naturedness and how he brought hope unto their lives, even when everything seemed hopeless. Such people are still trusting, that his illuminating spirit lives with them at this end.

A top traditional ruler in Osun State, whose domain  bestowed a sterling chieftaincy title on him many years ago, in a recent chat with this writer, described Asiwaju Isiaka Adeleke as an achiever in his own right, who was singularly lucky to have enjoyed God’s special grace and mercy in all his endervours. The foremost monarch also described Senator Isiaka Adetunji Adeleke as a likeable and lovable personality, even as first sight. The voice of the people is the voice of God.

There is no denying the fact that so many other highly and lowly placed people in the society are daily singing his praise. Senator Isiaka Adetunji Adeleke did not for once expose the weaknesses of people around him even when he knew they were up to a ‘game’. He tolerated every shortcoming of different human beings that came across him.

Though, he primed himself to come back and serve Osun People as their governor, that dream is not over yet and Senator Isiaka Adeleke will, by God’s grace, soon hear good news to that effect. His political spirit is fighting that cause, in addition to God’s mercy, the unfailing loyalty and unflinching love of the people of Osun State for him as a payback time, for all his selfless goodness to them when he was alive. Political activism is reigning supreme among his supporters. His political structure is waxing stronger on daily basis.

The Adeleke University, Ede where he was the first chancellor, is presently dotting the Is and the crossing Ts of a world-class biography in his honour. Whenever is glamorously launched and presented to the public, it will refresh and enliven the minds of the generality of the people about the life and time of humanness of Senator Isiaka Adeleke. It will also be a must for many homes, institutions and public libraries.

The Lagos Civil Service Club Ikeja, of which he was a distinguish member during his life time has organized a tournament in his honour at its newly rehabilitated Court to mark his second transition anniversary on April 20, 2019.

Senator Isiaka Adetunji Adeleke’s clear vision and ideology of “others first, self last”, should continue to be sustained by all and sundry. Not only in Nigeria, is the memory of the first Executive Governor of Osun State celebrated. Not long ago, his admirers in an Asian Country conferred on him, the title of Supreme Commander of politics without bitterness, while another Nigeria Society in Philippines, conferred on the Late Otunba of Ejigbo, the title of Generalismo of the down trodden people.

That is the man of the people, fondly remembered in far-flung areas of the world, because he rose above petty political squabbles and gave his golden heart to his people

We all salute your life of simplicity and kindness. A life of live and let others live, as a promoter of life more abundant for all. His Excellency, Isiaka Adeleke was an enigma that transited at God’s own appointment time when the ovation was loudest, but whose fragrance of presence we felt everyday. Senator Isiaka Adeleke, gave us cause to believe that life without recourse to the upliftment of mankind, is a worthless life. He taught us to give to charity, even if it is only with a flash of smile to the needy, the oppressed and the voiceless in the society to uplift their spirit.

These are qualities the late Asiwaju of Edeland amply demonstrated throughout his lifetime. We give glory to God for all the immeasurable good deeds that he put in place. They are simply indelible. We thank God that he lived unblemished life and his good name was untainted. Senator Isiaka Adeleke was a man with the midas touch. A legend in life and in death. A statesman par excellence, who was shoulder high above his peers. A true son of Late Balogun Raji Ayoola Adeleke and Mama Esther Adeleke, both of whom impacted positively on his life and their other amiable children.

The world at large is still missing you, iconic Isiaka Adetunji Adeleke. A man who shone like a lone star in the sky. A polished politician and humanitarian of no mean order. Senator Isiaka Adeleke was a total family man who was a father, not only to his biological children, but to many out there, whose lives he touched through scholarship awards and other silent philanthropic gestures.

The leader of leaders. Our leader yesterday, today and forever, continue to rest in perfect peace in Aljanat fridaus. Sweet is your memory my fantastic friend, brother and boss. Evergreen is your memory. 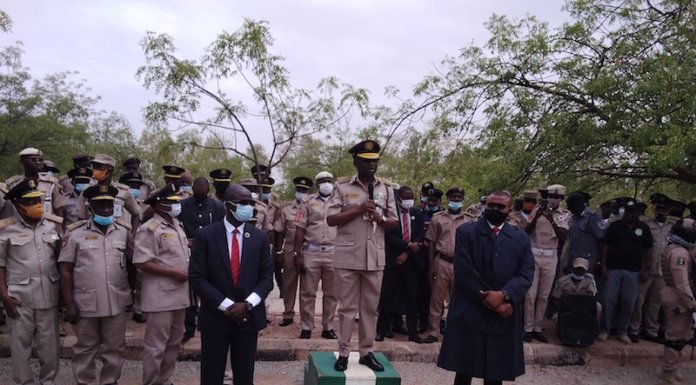