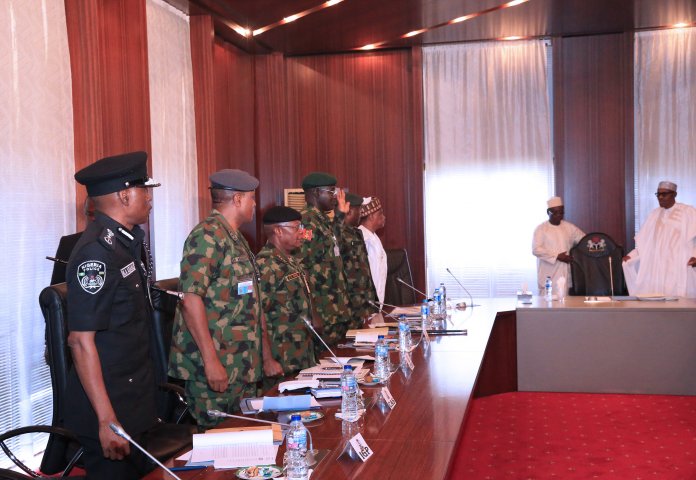 Let all Nigerians who are sincerely concerned about the terrifying and ever soaring wave of insecurity in the country come together, synergise and proffer lasting solutions to prevent the wanton wasting of human lives. And let those in government, constitutionally empowered with the protection of our lives and property walk the talk to save lives.

Nigeria cannot continue to be run this way. After all, the primary purpose of government as enshrined in Section 14(2b) of the 1999 Constitution (as amended) is to guarantee security as well as provide for the welfare of the citizenry. That perhaps explains why socio-cultural groups such as Afenifere, Ohaneze and the Pan Niger Delta Forum (PANDEF) have joined the clamour, asking President Muhammadu Buhari to be more decisive in tackling all manner of insecurity challenges bedevilling the nation. Even the House of Representatives had on Thursday 11th April 2019 told the president to do the needful, and urgently at that. One cannot blame them. Cumulatively, crimes and criminality have assumed the status of a hydra-headed monster ready to bring the nation to its knees.

In retrospect, one of the salient reasons why Muhmmadu Buhari, then the presidential candidate of the All Progressives Congress (APC) edged out the then incumbent president, Goodluck Jonathan of the Peoples Democratic Party (PDP) in the 2015 election was the public perception that given his military background, he could secure the nation.

In fact, he and his party did promise that with them in power, Nigerians would within a few months say ‘good bye’ to the menace of Boko Haram insurgency. Some four years down the line, the insecurity incubus has worsened so much that the Boko Haram insurgency, kidnapping for ransom, killings by herdsmen, cultism and armed banditry are all on the upswing! For instance, bandits have turned the once peaceful Zamfara State into a wasteland. The governor has long admitted that he was no longer qualified to be called the chief security officer of the state.

The scourge of insurgency and banditry continue to rage with passion in the states of Borno, Yobe, Adamawa, Kaduna and Taraba and now with Sokoto and Katsina in the fold. The challenge took on a new toga as it metamorphosed into the killer farmer- herdsmen clashes which sent not a few hapless, innocent citizens to their early graves in Benue, Taraba, Plateau States.

While Nigerians have got used to the angst that trailed theDasukigate allegations of billions of security votes converted to slush funds, there are still questions begging for answers. The impact of humongous amounts allegedly spent so far to drastically reduce insurgency vis-a-vis the pervasive insecurity is not being felt. In December 2017, the National Economic Council approved $1 billion dollars to combat the insurgency and other sundry crimes. Where has all the money gone with insecurity creeping into every nook and cranny of the country?

But in all of this, what matters most is for a holistic approach to bring solutions that last. The root causes of insurgency, banditry, kidnappings and armed robbery must be taken care of. We have to begin with the family unit that has virtually broken down. Every killer comes from a home. If the parents are there for him or her and if he is sufficiently engaged in some worthwhile venture the lure of blood money would be tamed!

In addition, the government must be there to provide a buffer against the shocks and pains of poverty and unemployment. With Nigeria as the headquarters of extreme poverty and the sixth most miserable country to live in, government must go beyond giving matching orders to top security personnel to deal ruthlessly with culprits, to looking for sustainable approach involving both the public and private sectors. A lot of public enlightenment and sensitisation of young minds against quick riches and religious extremism has become a necessity.

The time has come to be more proactive; to put in motion mechanisms that prevent all manner of crises than being reactive when they do rear their ugly heads. It is good to arm, train, insure and pay our soldiers and policemen well. It pays to be transparent and accountable with regard to security funding. But we need socio-economic restructuring; with community policing to bring security closer to the people.

We must also do away with the culture of impunity. The masterminds behind Boko Haram still walk our streets as free men. Giving amnesty to killers is not the best way forward. Wrong doers, no matter how powerful – be they politicians or traditional rulers- must be brought to speedy justice to serve as strong deterrence.
Nigerians desire and indeed deserve a safe, secure and productive environment for gainful employment, where their potential can be identified, honed and maximised. The blight of insecurity hurts us all. A government should act like a father figure that protects and provides. Anything short of that is inimical to peace and development.
––ayobaje@yahoo.co.uk