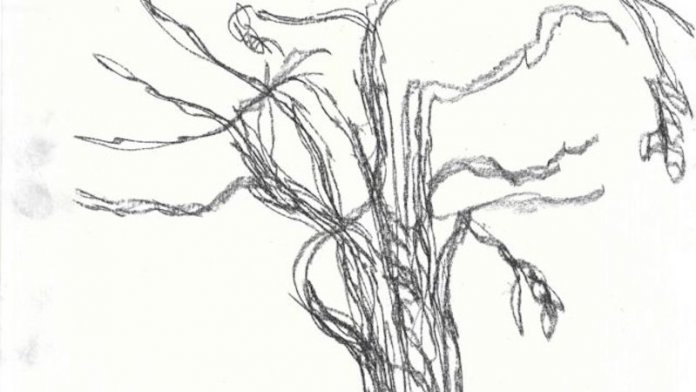 Duke Asidere, one of the contemporary Nigerian art’s leading lights, relives an emotionally intense period of his life in a solo exhibition that opened yesterday in Victoria Island, Lagos. Okechukwu Uwaezuoke reports

Emotionally overwhelmed, Duke Asidere had needed a reprieve. And he got it in 2004. This was when the Delta State Polytechnic’s art department, which was then recently established, said it desperately needed a visual arts lecturer. Asidere, who had previously lectured at Auchi Polytechnic between 1990 and 1995 with the likes of Sam Ovraiti and Ben Osaghae, thought it wouldn’t be a bad idea to work there, albeit for a short period of time.

At that time, he was already established in Lagos as a full-time studio artist. Yet, the polytechnic job, to him, not only offered a chance to impart his skills on the younger generation, but also the opportunity to reflect and heal.
It was during the two years he spent at the tertiary institution that he produced the 150 sketches featured in a solo exhibition, which opened – Saturday, March 30 – at the Hourglass Gallery’s new space along Saka Jojo Street in Victoria Island, Lagos.

Titled Sketches & Therapy, the exhibition also featured a presentation of a book on the sketches compiled by Dozie Igweze, the owner of the gallery. Talking about the book of sketches, it was the fallout of an idea nourished by Asidere and Igweze for many years. The duo thought it would be a great idea to assemble the sketches in a collection rather than have them simply dispersed to individuals. Besides, there was the fact that the public needed more enlightenment about art in general. This enlightenment would, of course, include explaining the creative process, getting acquainted with the ideas that come to play in art and the challenges that dog the creative process.

But then, other duties called and the book project had to be shelved. For Asidere, that meant continuing what he has best been known for: produce art and hold several solo exhibitions. Igweze, on the other hand, had tasted blood. The shelved book project gave him other ideas. One of them was to pen down his first book, titled The Storyteller of Agbarha-Otor – the Visual Tales of Bruce Onobrakpeya. This was a book, which beams the spotlight on the art of the renowned Nigerian artist, Bruce Onobrakpeya, while exploring his early influences and how they impacted on his art.

The idea of the book of sketches was dredged up again in 2016, when both the artist and the dealer finally agreed that the time for it had come. At last, the collectors would have a chance to enjoy all the works without having to collect them all. Thus, the book, which is Igweze’s second book, offers a fuller picture of the artworks than an aficionado might ordinarily glean from merely looking at a few of the pieces.
Already spurred on by the successful publication of two books, Igweze is already writing a third. And this is on one of the grand old men of Nigerian art, Abayomi Barber.

Close up on the exhibition, which concludes on Saturday, April 6. It lifts the veil on the inner turbulence that once threatened to overwhelm the artist. The viewer gradually comes to terms with the fact that the artist was giving vent to his hitherto pent-up emotions through the sketches. Hence, they aided his bid to regain his sanity and regenerate. Guided by his spontaneous pencil strokes, he wended his way through a maze of confusion as his ever-thirsting spirit groped for an elusive meaning.

Take the series he calls “the Empty Room”, for instance. He lets the viewer into his Spartan-like existence while he lectured at the Delta State Polytechnic. The scantily-furnished room he lived in had only a mattress on the floor and a picture on the wall, among a few other items. The emptiness of this room mirrors the haunting loneliness that drove him to despair. Indeed, it was as numbingly empty as a his prevailing state of mind.
Call the sketches autobiographical and that wouldn’t be wrong. But, they could also be seen as the artist’s travelogue, in which he shares his unique take on the landscapes and the people he encountered as he visited the neighbouring communities.
Back then, he had sketched as he explored several locations. These include the main highways of Asaba and its inner roads as well as a mechanic workshop in the city, the rustic communities of Ogwuashi-Uku and Ubulu-Unor and environs. Then, he also sketched the people he encountered during these explorations, the models in his art classes and his students.

Driven by a sense of urgency, the artist’s pencil strokes tell the story in sketchy forms, shunning the detailed masterly and more photo-realistic approach to drawing. He rather strains to capture the less tangible energy and vitality through his forms, who embody the hope, desperation, optimism and despair of Nigerians.
Besides, how indeed does one transfer emotions into rigid tangible forms? The artist’s choice to make use of pencils as the most instantaneous medium to express them is informed by the fact that much of them would be diluted or even lost in an attempt to express them with more tedious media. No second must be lost.

These sketches, by the way, were never intended as preludes to bigger works. No, the artist sees them as fully-formed works by their own rights. They were just ways to document his fleeting emotional states, which would have been less spontaneous if he had opted to document them in his oil on canvas paintings. Rather than being preludes to bigger works, some of the sketches are indeed post-mortems for his paintings. Through his bid to recreate the original oil paintings as sketches, he muses about what he could have done differently with them. For instance, could or should he have used different colours?
Born to a father in Lagos in 1961, who worked as a sailor with Elder Dempster, Asidere grew up under the strong influence of his mother. It is this early influence that explains his penchant for depicting women as strong, powerful figures in his paintings. Indeed, the strength and bravery of his female figures are a constant homage to his mother.

Talking about influences, Asidere also gained a lot of artistic insights under the tutelage of the late Gani Odutokun at the Ahmadu Bello University in Zaria. It is to this academic environment that he owes his aversion to conformity.
Later at the Federal Polytechnic in Auchi, he would not only become one of the institution’s leading lights while lecturing there, but also play a significant role in engraving the art school in the annals of the contemporary Nigerian art.
Meanwhile, Sketches & Therapy is the first of the adventurous exhibitions Hourglass hopes to hold in its new space.